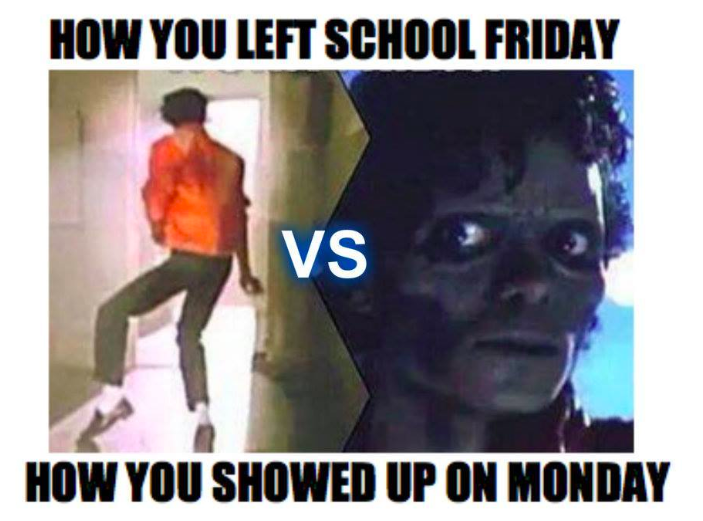 Mission 1: Not-Fundamentals
Mission Objectives.  You should be able to:
1. Describe a homologous series.
2. Differentiate between alkanes, alkenes & alkynes
3. Draw and interpret structural formulas
4. Identify different classes of functional groups
5. Apply IUPAC nomenclature rules to compounds
6. Discuss the structure of benzene
7. Explain the trends in boiling points in members of a homologous series.
8. Distinguish between empirical, molecular and structural formulas.


Download the guided notes so that you can follow along.
The below image courtesy of lardbucket.  According to the below table, the double bond is between the first two carbon atoms.  Unless there is a specific instance or I figure out otherwise, this is the format we will use. 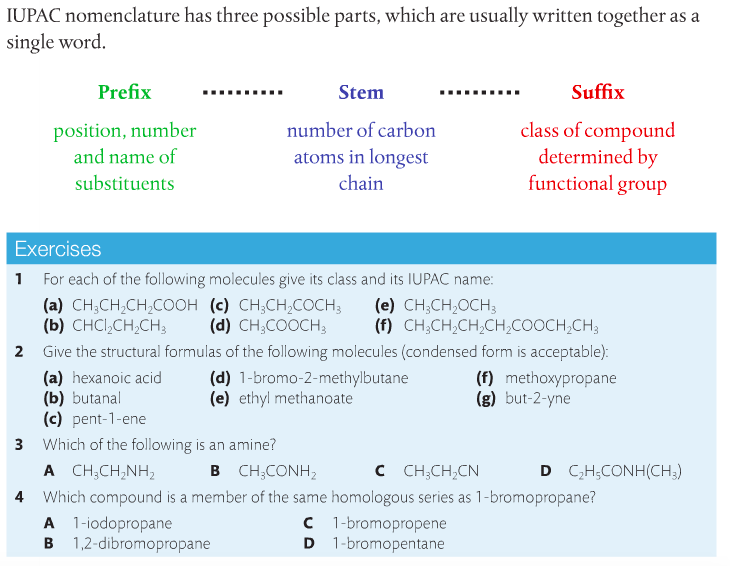 Structural isomers are different arrangements of the same atoms.  They have the same molecular formula, but look different.  Get familiar with the isomers of the first five straight-chain alkanes, and the first four alkenes.
Mission 2:  Functional Group Chemistry.
Mission Objectives.  You should be able to...
1.  Describe the reactivity of alkanes, alkenes, alcohols, halogenoalkanes, polymers & benzene.
​

Reactivity of Alkanes.  Alkanes are saturated hydrocarbons that contain C-C and C-H bonds.  They react in the presence of a strong energy source that can break those bonds.  They are nonpolar and as a result, are not very reactive.  However, there are two reactions involving alkanes: combustion and substitution.

Combustion:  Alkanes as fuels for engines and household heating because they produce significant amounts of energy when burned (think gasoline).  Combustion reactions are highly exothermic because of the energy released when bonds are formed in carbon dioxide and water vapor…the products of all combustion reactions.

Substitution:  Halogenation
The main type of reaction alkanes can undergo is substitution.  This occurs when a reactant (a halogen) replaces one of the hydrogen atoms in a hydrocarbon.  Ultraviolet light is necessary to break the covalent bond in Cl-Cl, which splits it into chlorine atoms that have unpaired electrons.  These are called free radicals.
Reactivity of Alkenes.  Alkenes are unsaturated hydrocarbons that contain a C=C bond.  They are more reactive than alkanes because the double bond is the site of reactivity.  One of the bonds is easily broken and so alkenes can undergo addition reactions and form a range of saturated products.

Addition of halogens produces halogeno- compounds. They happen fast at room temperature and are accompanied by the loss of color of the reacting halogen (p. 331).

Order of reactivity:  HI > HBr > HCl due to decreasing bond strength down group 17.

Adding water converts an alkene into an alcohol.  Uses sulfuric acid as a catalyst and requires heat with steam.  This is an industrial reaction because ethanol is a very important solvent and is manufactured on a large scale.

Polymerization.  Alkenes can be joined together to produce long chains called addition polymers (p. 332-333).  Polymers can contain thousands of monomers.  Repeating units have open bonds on each end (see text).

Alkenes regularly undergo addition reactions and are used as starting materials in the manufacture of many industrial chemicals.  See page 334***
Reactivity of Alcohols.  Alcohols burn in oxygen to form carbon dioxide and water, along with the release of significant amounts of energy.  The amount of energy released per mole of alcohol increases as we go up the homologous series, due to the increasing number of carbon dioxide molecules produced.  In the presence of limited oxygen, alcohols will produce carbon monoxide instead of carbon dioxide.

Oxidation of alcohols
Combustion involves the complete oxidation of alcohol molecules, but it is possible for them to react with oxidizing agents that selectively oxidize the carbon atom attached to the alcohol (-OH) group, which keeps the carbon skeleton intact.  This turns them into other important molecules.  These products are determined by whether the alcohol is primary, secondary or tertiary.

The most common oxidizer is acidified potassium dichromate (VI), which is bright orange owing to the presence of chromium (Cr(VI)), which is reduced to green Cr(III) as the alcohol is oxidized on heating.  The oxidizing agent is shown as “+[O]”

Primary alcohols are oxidized in two-step reactions; first forming aldehyde, then, under prolonged conditions, is oxidized further to carboxylic acid.  The reaction can be stopped after aldehyde is formed and obtained using distillation.  If the carboxylic acid is required, it can be obtained after continued oxidation using the apparatus for reflux.

​Esterification reactions
Alcohols react with carboxylic acids to form esters in a condensation reaction in which water is also a product. The reaction is an equilibrium reaction and is catalyzed by concentrated sulfuric acid.  The ester has the lowest boiling point and thus can be separated using distillation.  Esters have distinct smells that can be detected when they’re added to water.  Esters have no free –OH bonds, so they are insoluble and form a layer on the surface of the water.

Reactivity of Halogenoalkanes.  Contain an atom of fluorine, bromine, iodine, or chlorine bonded to the carbon skeleton of the molecule.  Because they are saturated molecules, their reactions involve substitution (the replacement of one atom by another atom or group).  However, they posses a polar bond and this makes them more reactive.

The polarity in halogenoalkanes is due to the fact that the halogen atom is more electronegative than carbon and so exerts a stronger pull on the shared electrons in the carbon-halogen bond.  The halogen then gains a partial negative charge and the carbon gains a partial positive charge and is said to be electron deficient.  Nucleophiles are reactants that are electron rich, as they have a lone pair and may carry a negative charge.  So they are attracted to an electron deficient carbon atom in the halogenoalkane, and this leads to substitution of the halogen, known as nucleophilic substitution.  –OH is a good nucleophile.
Reactivity of Benzene. Benzene is a stable molecule due to its delocalized electrons.  Addition reactions are thus not favored as the products would be of higher energy than the reactants.  Substitution reactants, in which one or more atoms are substituted, occur more readily as they lead to products in which the aromatic ring is conserved.  The delocalized electrons are the site of reactivity (being an area of electron density).

Electrophiles are reactants that are themselves electron deficient, as they have a positive charge or a partial positive charge.  They are attracted to the electron-rich benzene ring, leading to electrophilic substitution reactions.

Below is the structure of a benzene ring and its delocalized electron clouds.  Courtesy of www.chemhume.co.uk.