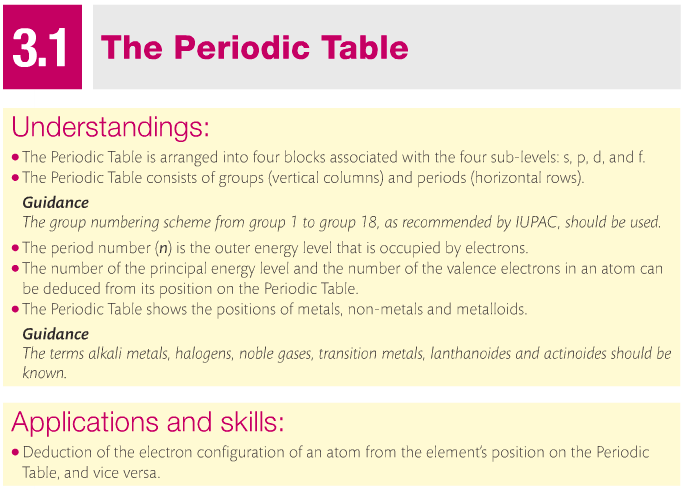 Mission 1:  Periodic Structure
Mission Objectives.  You should be able to...
1.  List and explain all the ways the Periodic Table is organized.
2.  Relate electron configuration to periodic table structure.
3.  Name all the element families.

Antoine Lavoisier was the first to list the known elements during his time (mid 1700s).  However, Dmitri Mendeleev is credited with organizing the periodic table as we know it in 1871, but he was not the only one trying to understand the behavior of the elements.  Lothar Meyer was one of many scientists also working on arranging the elements at the same time, but Mendeleev published his results first.

John Newlands was the first to notice a pattern in element behavior when they were arranged in groups of eight in 1863.  The chemical properties of certain elements were very similar when arranged in this manner.  Newlands called this the Law of Octaves.  It is similar to a musical scale, which repeats every eighth tone.  However, the law fails for elements beyond calcium.

Hydrogen is a very special element, which is why it isn’t connected to the other elements.  It is classified as a Group 1 element because of its one valence electron, but that’s the only thing it has in common with those elements.

Group 1 elements are the Alkali Metals.  They are extremely reactive because of their one valence electron.  They are silvery and soft enough to be cut with a knife.

Group 2 elements are the Alkaline Earth Metals.  They are slightly less reactive than their neighbors.  They are also silvery, being metals, and are denser than Group 1 elements.

Groups 1-2 and 13-18 are the Representative Elements (aka “A” elements).  They have a wide range of physical and chemical properties.

Groups 3 – 12 are the Transition Metals (aka “B” elements).  They have a moderate range of reactivity and a wide range of properties.  They are shiny and are good conductors, with higher densities and melting points than Groups 1 and 2.

Lanthanides and Actinides:  These are the “f-block” transition metals.  They share many properties.  The lanthanides are shiny and reactive.  The actinides are all radioactive and unstable.

Elements 95-118 do not exist in nature; they were created in a laboratory.

Group 13 elements are headed by boron (but I named them the Boronites because they need a name).  This group contains one metalloid and four metals.  They all have 3 valence electrons.

Group 14 elements are headed by carbon (and I call them the Carbonicles).  There is one metal, two metalloids and two metals.  This group has 4 valence electrons and varied reactivity.

Group 15 elements are headed by nitrogen.  Their family name is Pricogens.  This group has varied reactivity and 5 valence electrons.

Group 16 elements, the Chalcogens, are headed by oxygen.  They have six valence electrons and is a very reactive group.

Group 17 elements are the Halogens (“salt former”).  They are all nonmetals and are extremely reactive.  They are poor conductors.  They have 7 valence electrons.

Group 18 elements are the Noble Gases.  They are all inert, which means that they don’t react.  They have a full octet of 8 valence electrons, and the shell is filled as a result, which is why these elements are so stable. 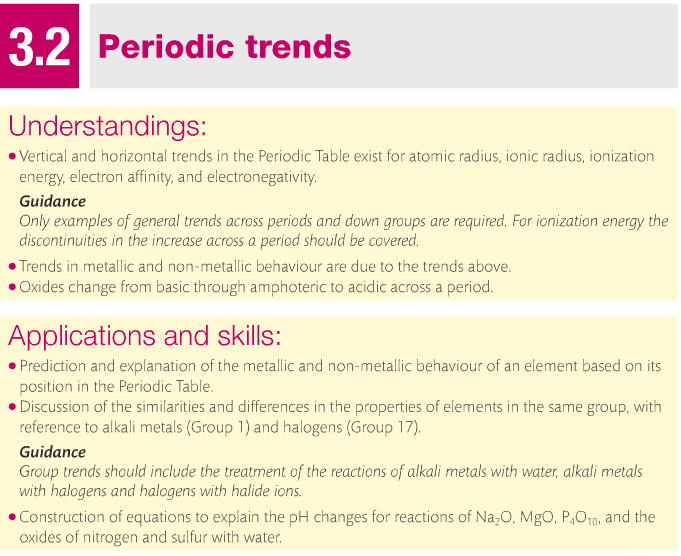 Mission 2:  Periodic Trends
Mission Objectives.  You should be able to...
1.  Define the following: ionization energy, electronegativity, electron affinity, atomic radius & ionic radius
2.  Explain trends and patterns in the periodic table.
3.  Compare similarities and differences in the properties of elements in the same group for Groups 1 & 17.
4.  Name all the element families.
5.  Discuss the chemical properties of Period 3 elements.
Atomic Radius (AR)

Therefore, atomic radii decrease across a period and increase down a group.

Therefore, ionic radii decrease across a period and increase down a group.

Therefore, ionization energy increases across a period and decreases down a group.

The electronegativity of an element is the tendency of its atoms to attract electrons when they are chemically combined with another element.  Noble gases do not have electronegativity values because they do not readily form compounds; they are inert.  Electronegativity follows the same pattern as ionization energy and the opposite pattern of atomic radius.

Therefore, electronegativity increases across a period and decreases down a group.

This summary image is courtesy of WilenskyChemistry: 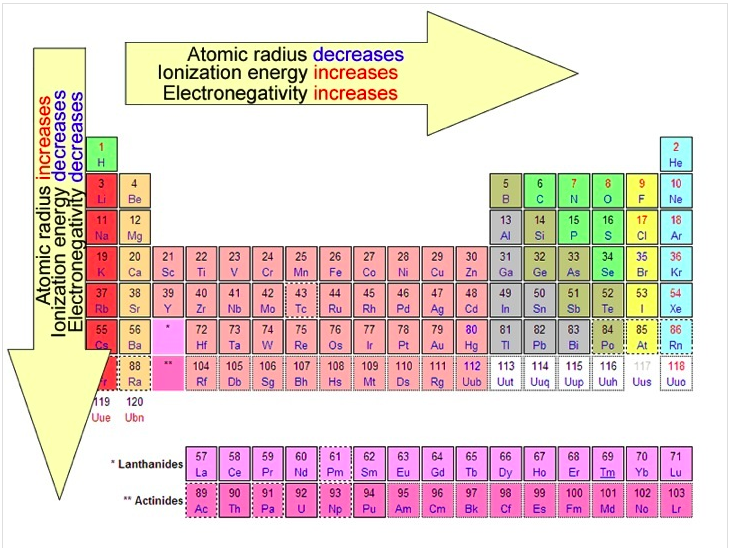 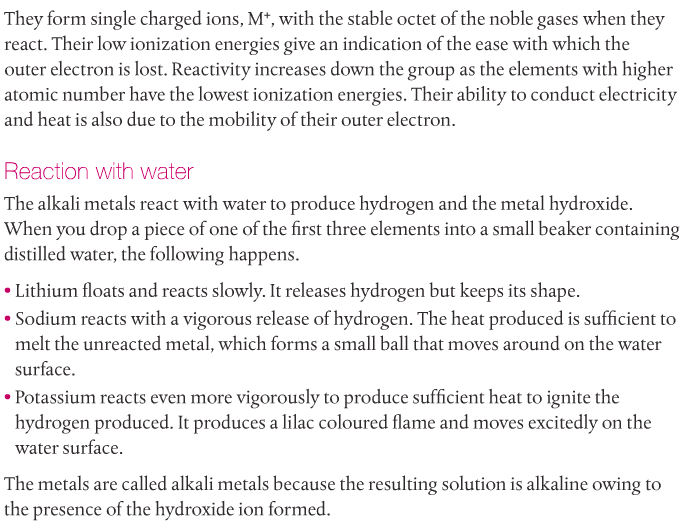 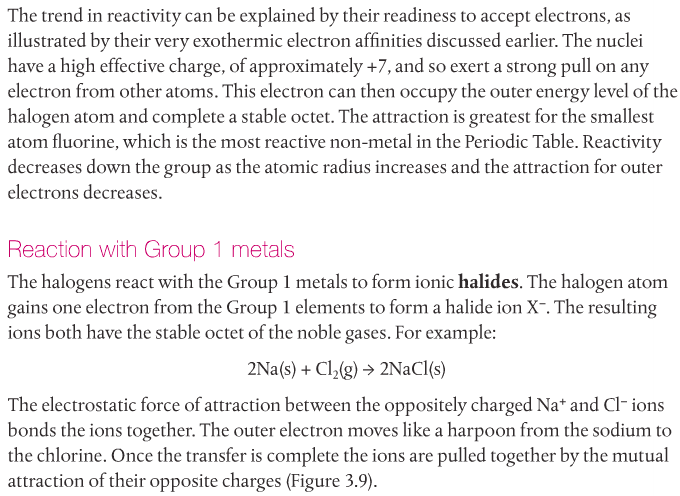 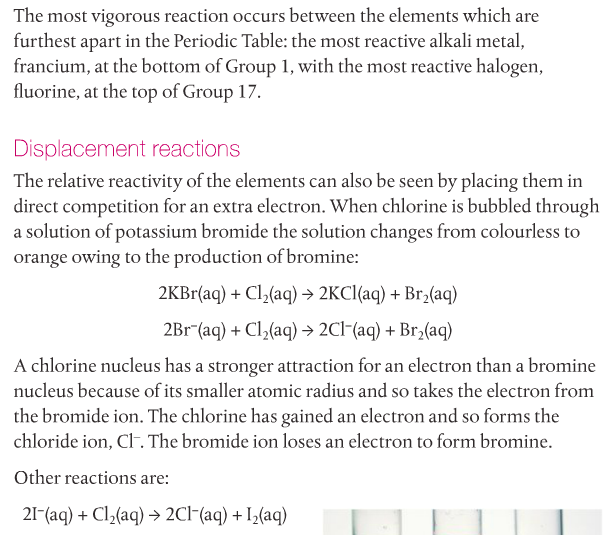 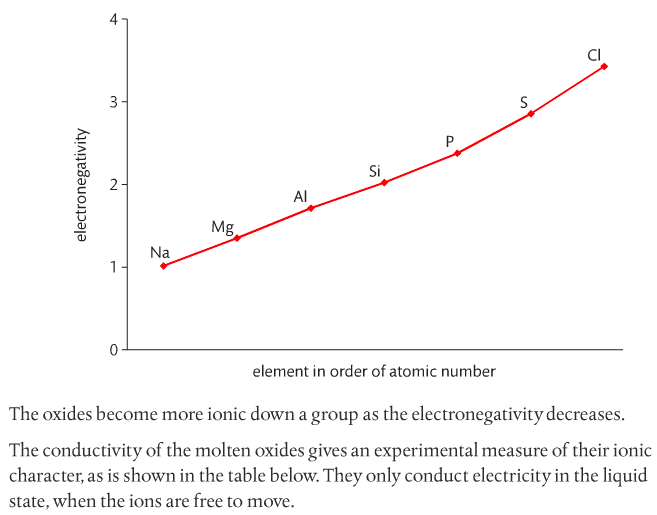 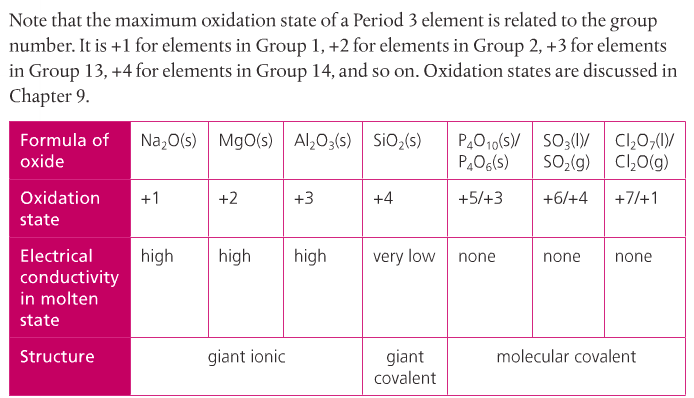 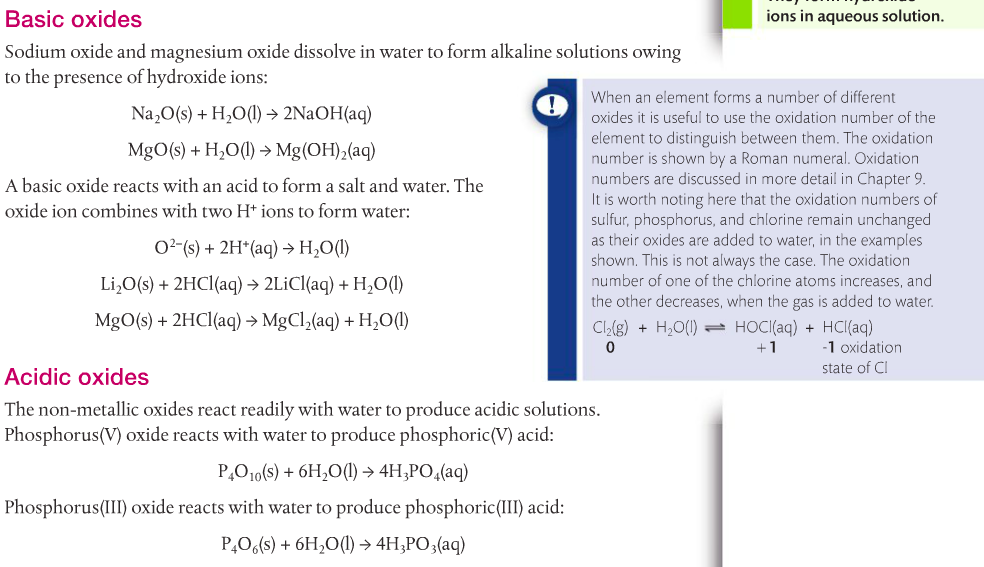 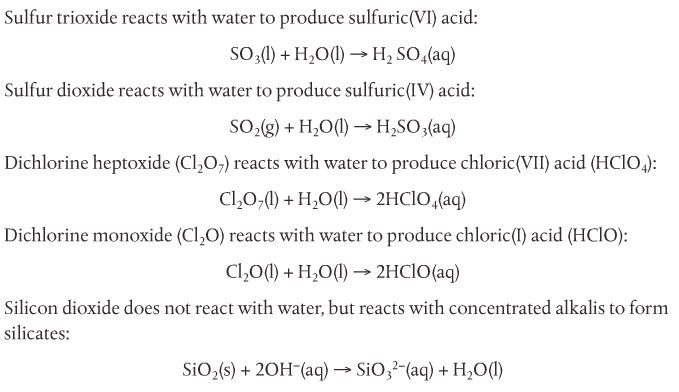 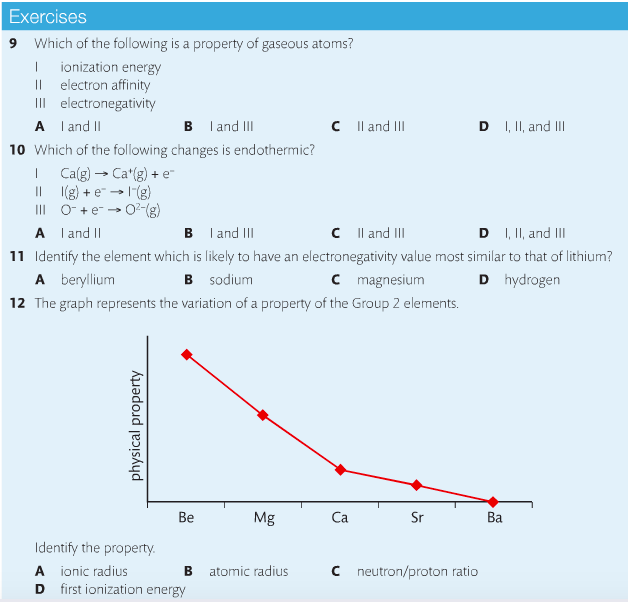 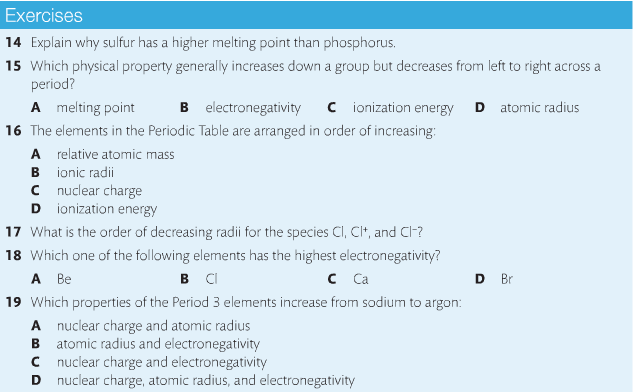 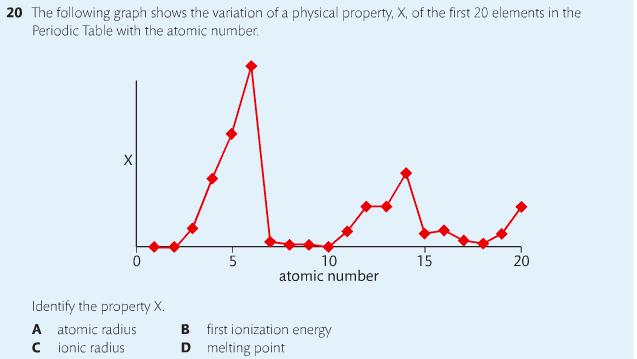 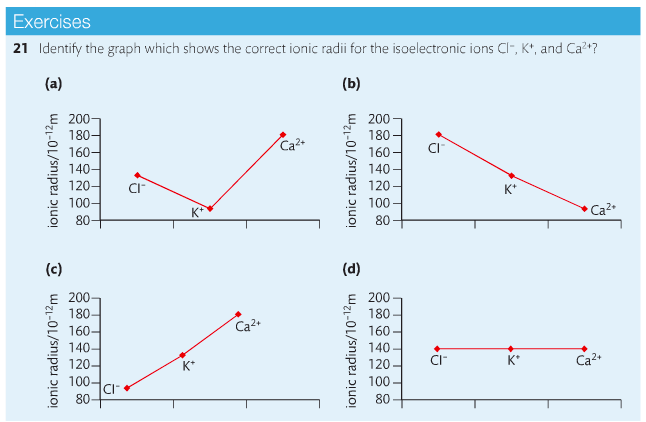 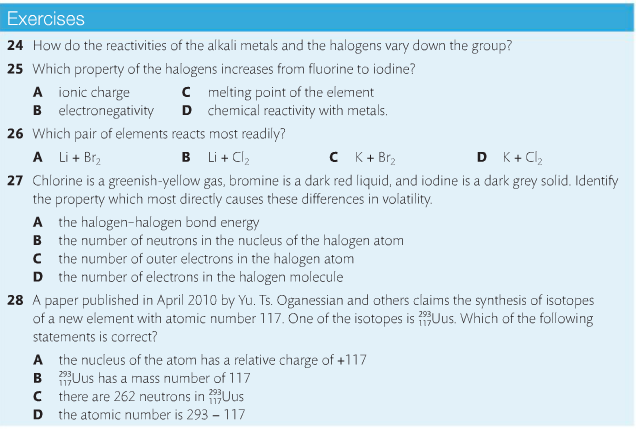 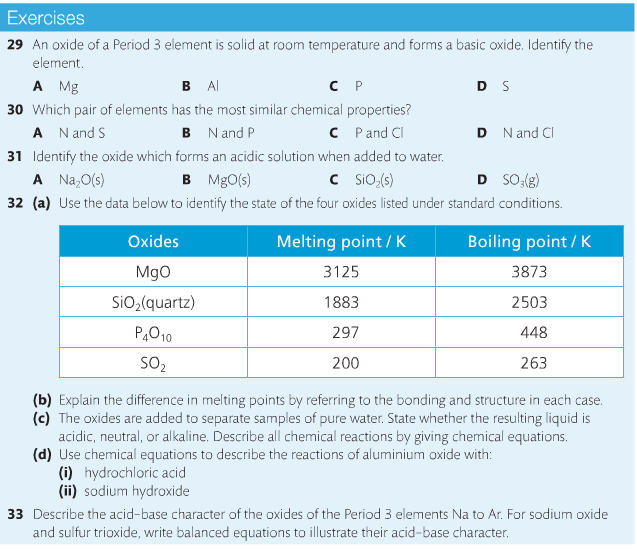