Mission 1: Equilibrium in Different Systems
Mission Objectives.  You should be able to...
1.  Describe the characteristics of chemical and physical systems in a state of equilibrium.
2.  Define "forward reaction" and "reverse reaction."
3.  Summarize the features of a system at equilibrium.
4.  Explain equilibrium position in terms of left and right.

​In chemistry, equilibrium describes a scenario where there is no net movement between reactants and products of a reaction. When a reaction takes place at the same rate as its reversible (backwards) reaction, no net change is observed, so the reaction is said to be at equilibrium (Pearson 2014).

Equilibrium law allows chemists to quantify reaction components and predict how far reactions will proceed under different conditions.
Physical Systems
Bromine (which is a volatile liquid at room temp) is placed into a sealed flask and heated.  Some of the atoms will have enough energy to phase into the gaseous state and form vapor.  This is called evaporation.  Because the container is sealed, no atoms escape and the concentration increases.  Some of the vapor molecules will collide with the surface of the liquid bromine, lose energy and return to the liquid state.  This is called condensation.  See the below image from the Pearson (2014) text.  The rate of condensation increases with the increase in concentration of vapor.  Eventually, the rate of condensation is equal to the rate of vaporization and there will be no net change in the amount of liquid and gas present in the flask.  At this point, the system has reached equilibrium. 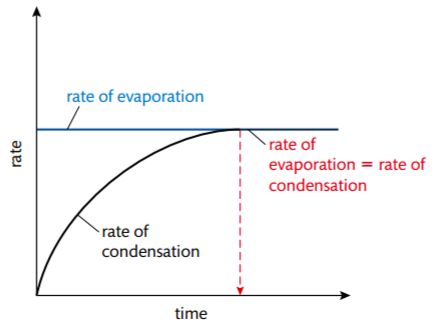 Chemical Systems
Refer to the decomposition of hydroiodic acid equation below from the Pearson (2014) text.  The text describes this reaction as dynamic, which means the forward and reverse reactions are still occurring.  However, there is no net change.  The contents of the flask are called the equilibrium mixture.  The forward reaction goes from left to right, obviously.  Which means the reverse reaction goes from right to left.  In this case, the word “constant” does not mean “equal.”

If the experiment were reversed and started with hydrogen gas and iodine gas instead of hydroiodic acid, an equilibrium mixture would eventually again be achieved in which the concentration of the gases and the acid would remain constant.  See below from the Pearson (2014) text.

At equilibrium, the RATE of the forward reaction is equal to the rate of the reverse reaction.  Some of the main features of a system at equilibrium are shown below. 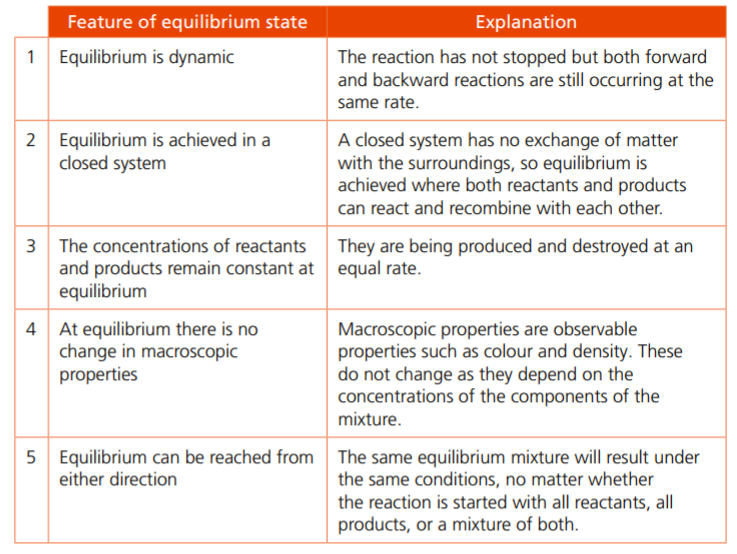 Even though the concentrations of reactant and product are constant at equilibrium, this does not necessarily mean that they are equal.  Most commonly, there will be a much higher concentration of reactants or products in the equilibrium mixture, depending on the reaction and the conditions.  The proportion of reactant and product in the equilibrium mixture is referred to as its equilibrium position.  Reactions where the mixture contains predominantly products are said to "lie to the right" of the arrow.  Reactions where the mixture contains mostly reactants are said to "lie to the left" of the arrow.

Understanding the nature of equilibrium allows researchers to control reaction conditions and maximize product yield. This is significant in industry, as you'll soon learn.

It is important to understand the position of the equilibrium, which means determining whether reactants are favored or products are favored, and how to manipulate the position to maximize product yield and industry profitability.  The law of chemical equilibrium states that at a given temperature, the ratio of the concentration of products (raised to the power of their molar coefficients) to the concentration of the reactants (also raised to the power of their molar coefficients) is a constant (see the below image).  This constant is called the equilibrium constant, Kc.
Mission 2: Bringing Math Into It.
Mission Objectives.  You should be able to...
1. Determine Kc using stoichiometry.
2. Explain what the magnitude of Kc means in terms of a chemical reaction.
3. Define and explain "Q" the reaction quotient.
Let's look at the below equation.  If we were to carry out a series of experiments on this reaction with different concentrations of each substance, we could wait until each reaction reached equilibrium and then measure the composition of the equilibrium mixtures.  Here are some results from the Pearson (2014) text. 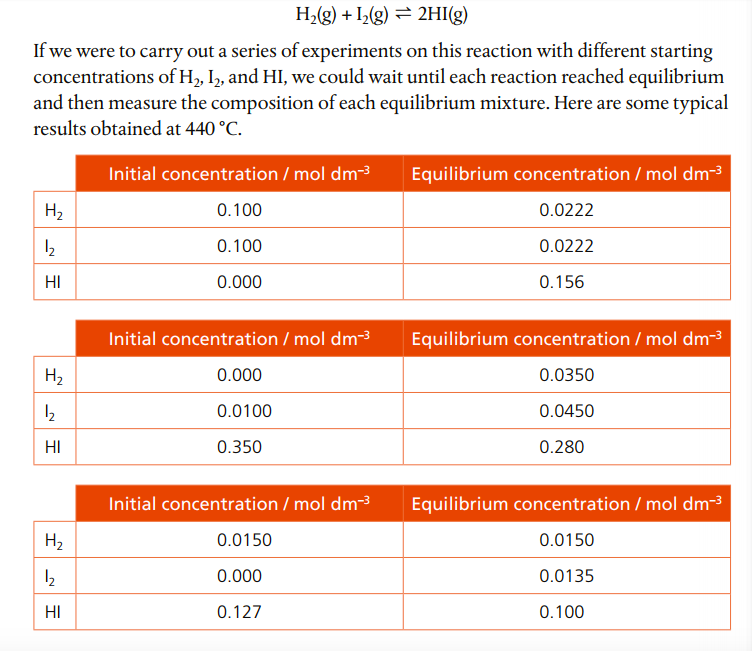 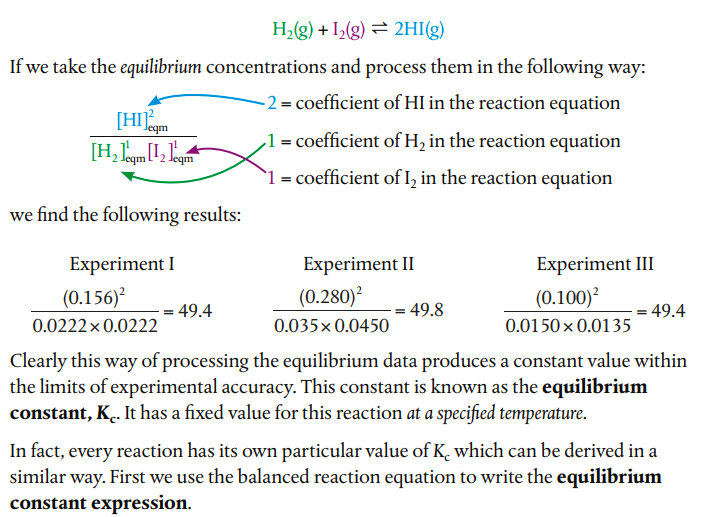 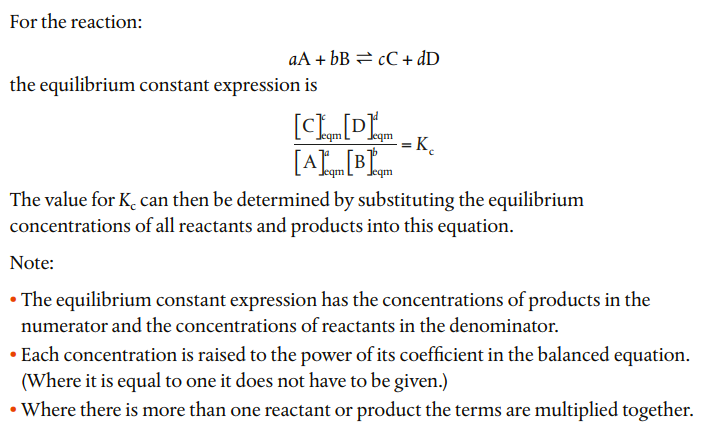 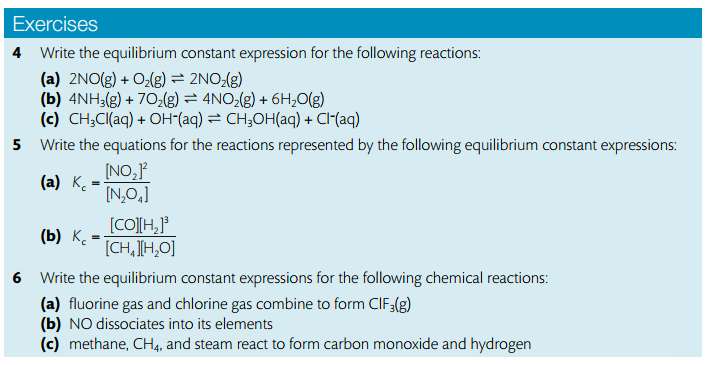 Different reactions have different Kc values.  What does Kc tell us about a particular reaction? 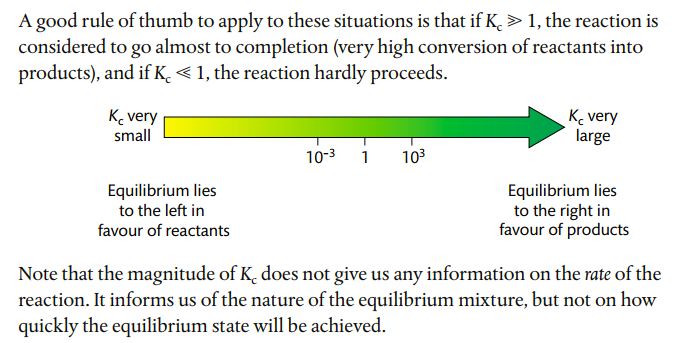 Remember that the value of Kc is calculated from substituting the equilibrium concentrations of all reactants and products into the equilibrium constant expression.  Any other values will not give Kc for that reaction at that temperature.

Read more about the reaction quotient (Q) here.  It's also in your text.  You need to know the relationship between Kc and Q.

See the below problem from the Pearson (2014) text. 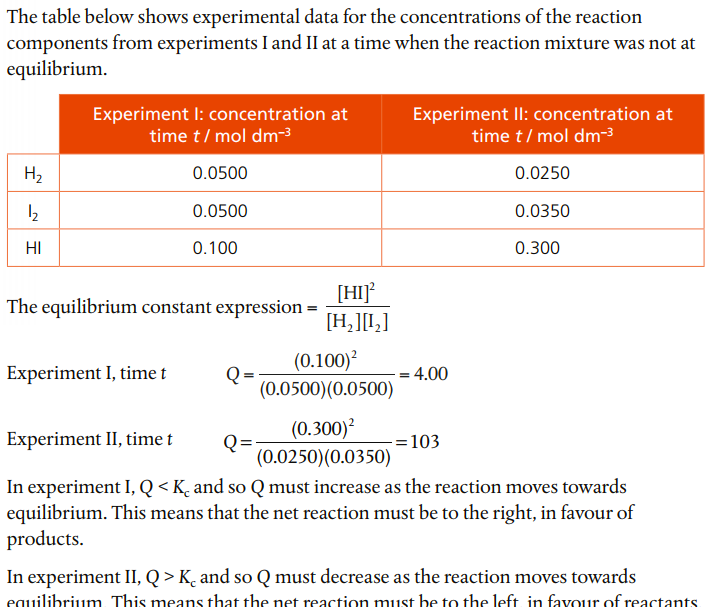 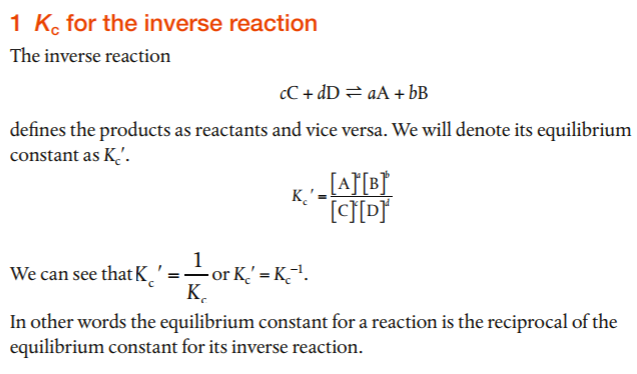 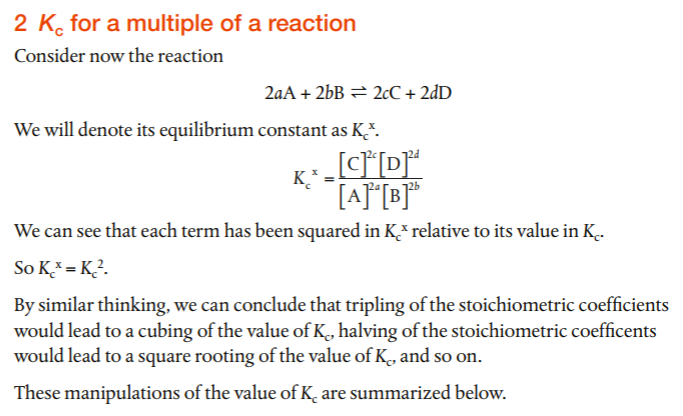 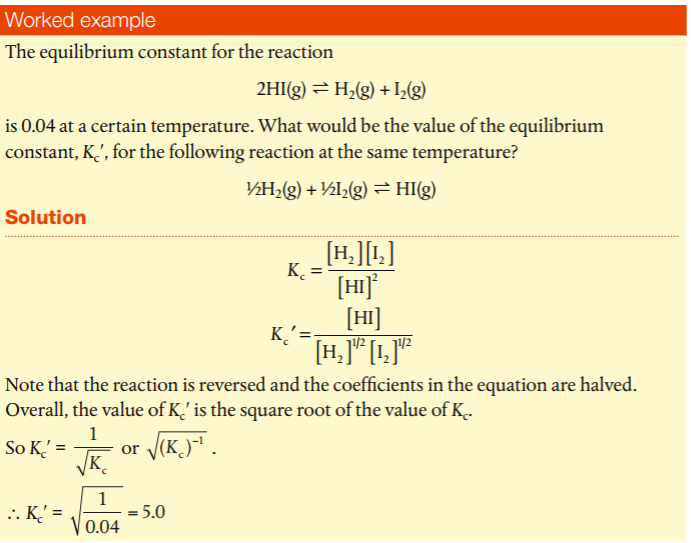 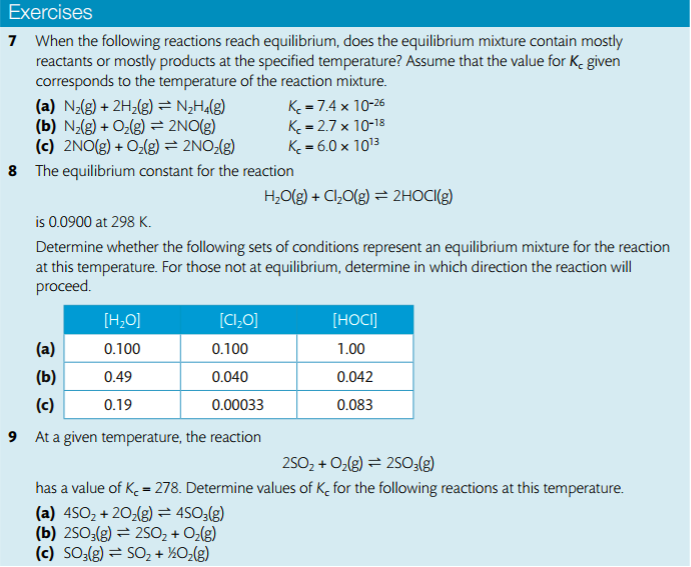 Mission 3: Le Chatelier's Principle
Mission Objectives. You should be able to...
1.  Explain Le Chatelier's Principle in your own words.
2.  Explain what it means when reactions must shift either to the left or the right.
3 . Describe the effects of changing concentration, temperature and pressure on reactions at equilibrium.
4.  Describe what happens when a catalyst is added to a reaction at equilibrium.
5.  Explain what the Haber Process and the Contact Process are, and their significance.

​Le Chatelier's Principle is a rule that is useful for predicting the effect that changing conditions have on the equilibrium position.  "If a change is made to a system in equilibrium, the balance between the forward and reverse reactions will shift to offset this change and return the system to equilibrium" (Oxford, 2014).

Watch the below videos to gain a better understanding of Le Chatelier's Principle.

Factors that affect equilibrium:
Change in concentration.  When an increase in concentration of a reactant occurs and disrupts equilibrium, the rate of the forward reaction will increase.  The reverse reaction does not change, so the rates are no longer equal. When equlibrium is re-established, the mixture will have new concentrations and the equlibrium will have shifted to the right to favor the products.  Addition of reactant causes the system to respond by removing reactant to make more product, which favors the forward reaction.

Change in temperature.  Kc is temperature-sensitive, so it changes as temperature changes.  Exothermic reactions (delta-H negative) release energy and endothermic reactions (delta-H positive) absorb energy.  A negative delta-H means that the forward reaction is exothermic.  If this reaction is subjected to a temperature decrease, the system responds by producing heat and favoring the forward reaction.  Equilibrium shifts to to the right as a result. This means more product is formed.  A new equilibrium is achieved and Kc changes.

Increasing the temperature favors the reverse reaction and shifts equilibrium to the left, decreasing the value of Kc and reducing the amount of product formed.

Adding catalysts.  Catalysts speed up reactions by reducing Ea.  The rate of both reactions will increase by the same factor, which has no effect on the equilibrium position.  Adding a catalyst reduces the time it takes to achieve equilibrium.  Pages 188-189 provide excellent summary tables of the effects of temperature and catalysts on equilibrium.  Study them.

The following videos describe the Haber Process for ammonia production and the Contact Process for the production of sulfuric acid. ​​
Describe the effects of adjusting the temperature and pressure on the formation of ammonia. 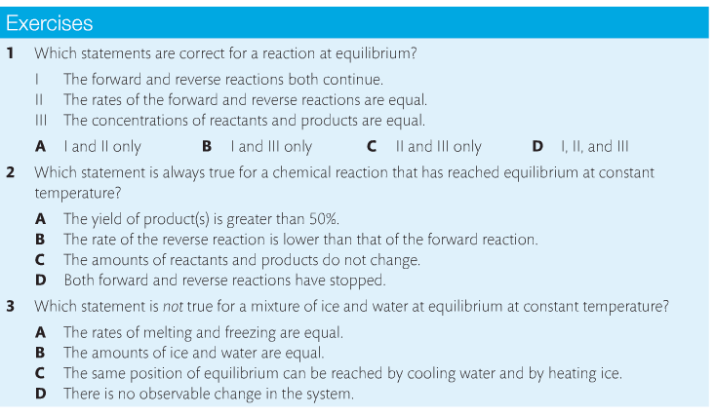 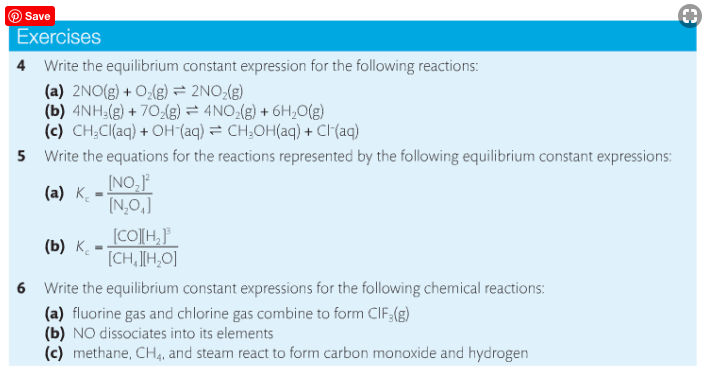 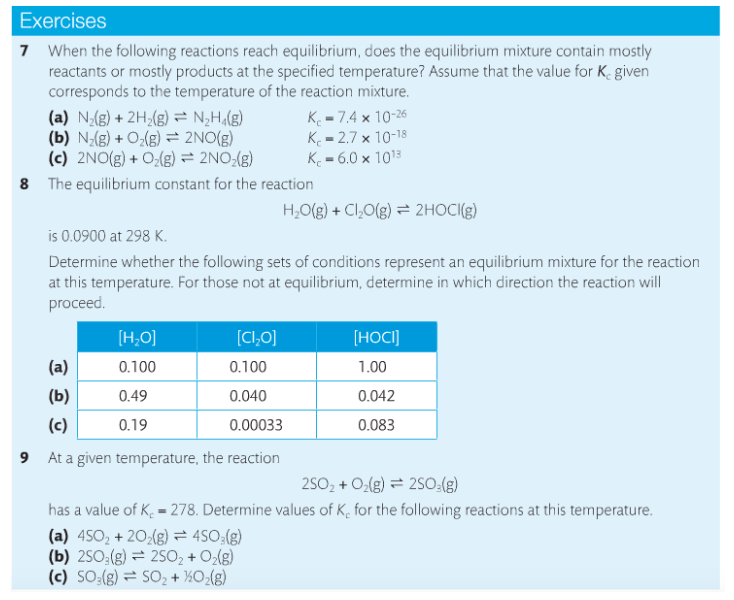 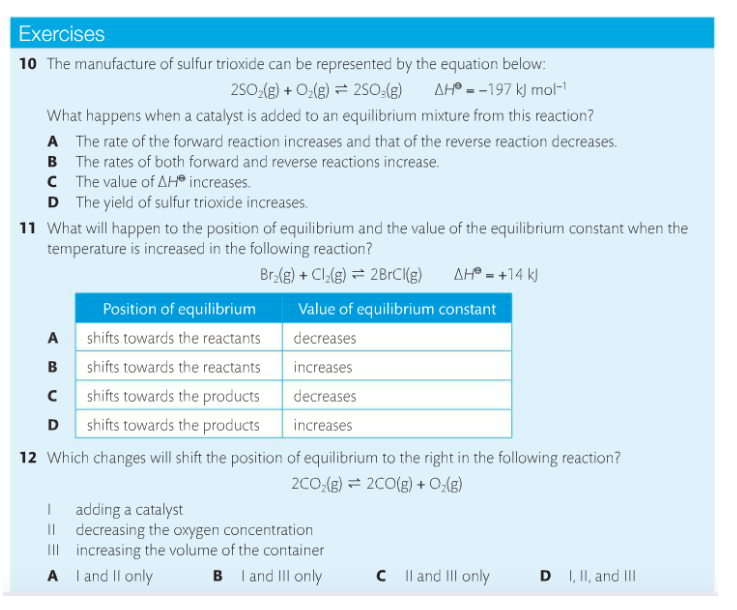