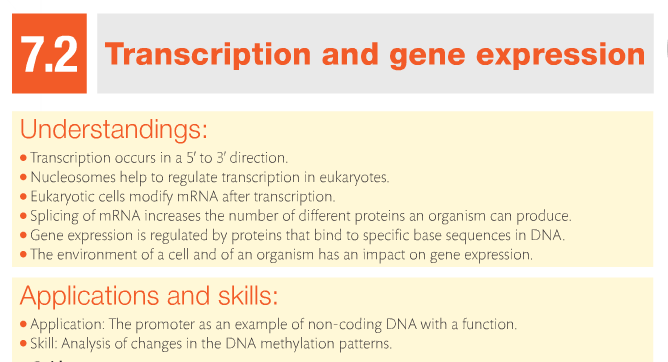 Gene expression is the process by which the genetic code--the nucleotide sequence--of a gene is used to direct protein synthesis and produce the structures of a cell.  Simply put, it is the process of going from DNA to a functional product (polypeptide chain).  It has two stages: transcription and translation.  Genes that code for amino acid sequences are called "structural genes" (VGEC, 2020).  You can learn more about gene expression here.

A fundamental difference between replication and transcription is the enzyme used.  Instead of helicase, RNA polymerase separates DNA.  It must combine with a region of DNA called a promoter.  A promoter is a short sequence of non-transcribed bases.  Once RNA polymerase has attached to the promoter for a gene, transcription begins.  The DNA opens and a transcription bubble forms.

The promoter determines which strand is the antisense strand, but it depends on the gene or sequence of genes. 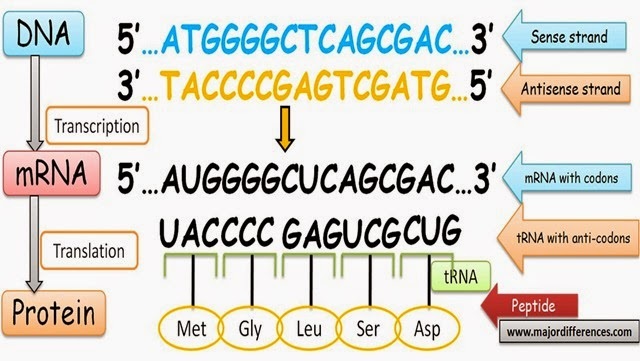 Eukaryotes have regions of non-coding DNA called introns.  Regions of DNA that code are called exons.  To make a fully functional mRNA strand, introns are removed via splicing and the exons are rearranged.  This "revised" mRNA is now able to code for many proteins. 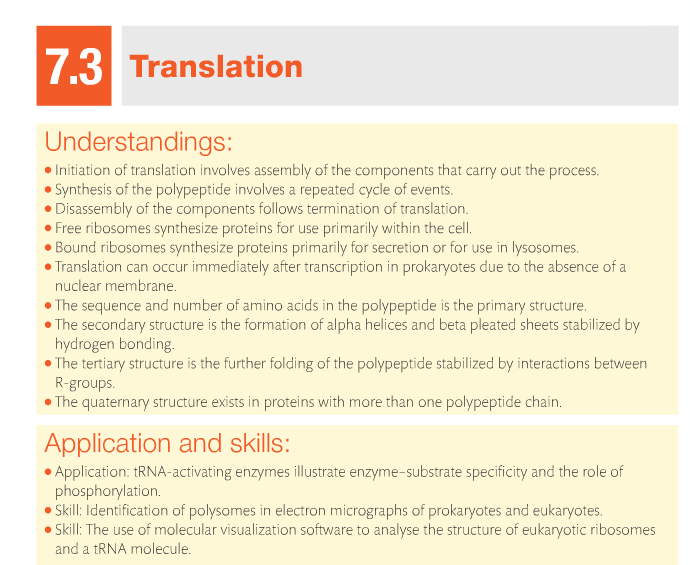 Translation is the process by which the language of DNA becomes proteins.  To understand this in detail, the structure of the ribosome must be shown.
Inside a ribosome are two subunits: large and small.  In between the large subunit and the small subunit is a cavity.  There are three sites within the ribosome.  "A" is the "waiting room" for the tRNA holding on to an amino acid.  "P" is the site where the tRNA attaches the amino to the polypeptide chain.  "E" is the location where the unloaded tRNA exits the ribosome and goes back into the cytoplasm.  The polypeptide chain is assembled in the cavity and leaves the ribosome through a channel in the large subunit.

There are 64 possible codons.  There are 3 STOP codons and 1 start codon.  For every amino acid, there may be more than one codon.  This is called degeneracy.  This makes the genetic code universal, which means that all organisms share the same code.  This allows for the exchange of genes between species via genetic engineering.  For example, human insulin (a protein) was inserted into bacteria so they can produce it in large quantities.

Translation has four steps.  Page 334 in the online text contains an interactive for you to watch.  It's next to the image.
1. Initiation.  The activated amino acid methione attaches to tRNA with the anticodon UAC.  It moves down the mRNA strand until it combines with the AUG codon.
2. Elongation.  tRNA takes aminos to the mRNA-ribosomal complex in the order specified by the codons.  Proteins called elongation factors assist in binding tRNA to mRNA at the "A" site.  Ribosomes catalyze the formation of peptide bonds between adjacent amino acids that are in the polypeptide assembly area.
3. Translocation:  This is the movement of tRNAs from one site to another in the ribosomal complex.
4. Termination:  This begins when a stop codon appears at the open A site.  A protein called a release factor catalyzes hydrolysis to free the polypeptide chain and release it from the ribosome.  The ribosome separates from mRNA, the tRNAs detach, and the protein is released either into the cytoplasm or is secreted from the cell.

Protein Structures.  (This is a review for you).​
Proudly powered by Weebly