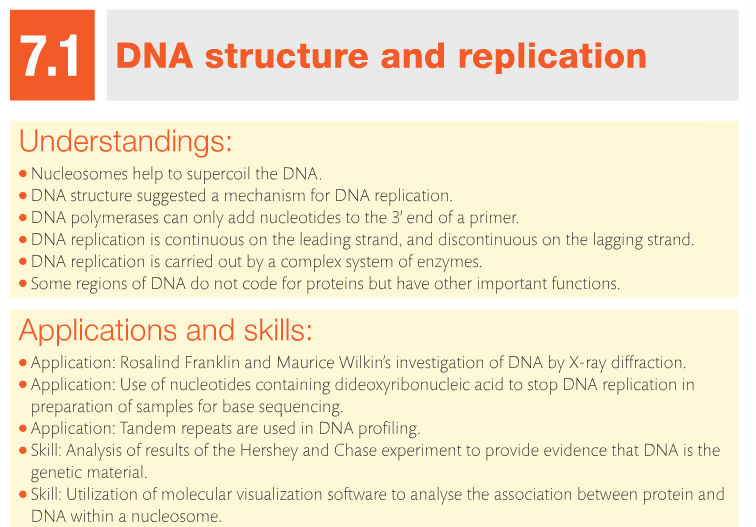 Mission 1: Replication
Mission Objectives.  You should be able to...
1.  Explain how DNA replicates itself.
​2.  Explain how DNA is packaged.
3.  Describe the function of the enzymes involved in replication.
4.  Distinguish between the leading strand and lagging strand.
5.  State what an Okazaki fragment is and explain its purpose.
6.  Analyze the results of the Hershey-Chase experiment.

A nucleosome is a basic unit of DNA packaging.  It consists of chromatin wrapped around 8 histones, which are positively-charged proteins that adhere to the negatively-charged DNA molecule. The nucleosomes then coil to form solenoids and the loops are then folded to produce a "fiber" that coils once more to form chromatids.  This process is called supercoiling and it is how the lengthy DNA molecule is able to fit inside the nucleus.  You can read more about supercoiling chromatin here.

The below images show how chromatin coils around the histones to form a nucleosome.
A large portion of the DNA strand is composed of highly repetitive sequences.  Then there are the single-copy genes that have coding functions.  They are responsible for producing the base sequences that make proteins at the ribosomes, and the base sequences are carried from the nucleus to the ribosomes via messenger RNA.  Genes are made up of coding and non-coding fragments called exons and introns, respectively.  Structural DNA is DNA that does not have a coding function.

The complementary base pairing provides a way for DNA to be copied.  A single strand provides a template that allows for a perfect copy of the molecule.  This is called the semi-conservative model of replication.  Replication occurs during the S phase of interphase.

The below image, courtesy of Bioninja, shows how DNA is replicated.

The original strand, shown on the right side of the image, is unzipped or unwound by the enzyme helicase.  Helicase breaks the hydrogen bonds that link the nitrogen bases and allows the molecule to split.  This occurs at specific regions, called replication origins, that create a replication fork of two polynucleotide strands in antiparallel directions (the middle portion of the diagram).  DNA polymerase is an enzyme that helps put together new DNA strands from the original strand, nucleotide by nucleotide.

Each nucleotide that is added to the DNA chain is actually a deoxynucleoside triphosphate dNTP molecule.  This molecule contains deoxyribose, a nitrogen base, and three phosphate groups.  Two phosphate molecules are lost to provide energy for the chemical bonding of the molecules.

In order for this process to work normally, another enzyme called RNA primase (which is a short strand of RNA), precedes DNA polymerase by preparing the molecule in order for it to receive the nucleotides from DNA polymerase. It is the small portion in red in the above image.  Then DNA polymerase III allows the addition of free nucleotides in a 5' to 3' direction to produce the growing strand.  DNA can only be formed in the 5' to 3' direction because of polymerase III.  In the above image, the leading daughter strand (top) is formed from left to right and the lagging strand is formed from right to left.  The lagging strand lags because it's being assembled in reverse and it takes a little more time.

The rate at which DNA strands are replicated at a rate of up to 4000 nucleotides per second.  This is accomplished by having multiple replication sites on each strand.  It is an extremely accurate process; few mutations occur, and cells have repair enzymes that detect and correct mistakes when they do happen. 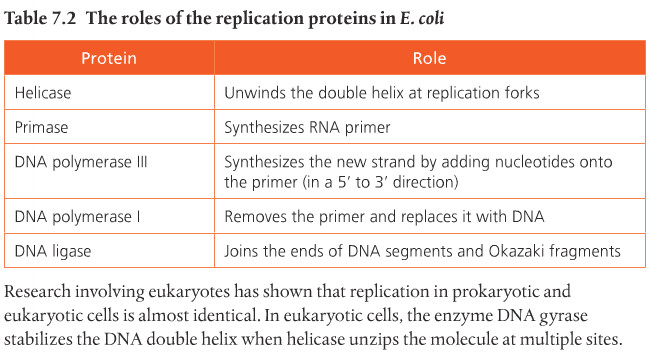