The Born-Haber Cycle is an energy cycle for the formation of an ionic compound.  It is a series of hypothetical steps and their enthalpy changes needed to convert elements to an ionic compound and devised to calculate lattice energy.  It is an application of Hess' Law. I sent you a powerpoint and corresponding notes introducing the concept.  Below is a simple example to help visualize the concept.  ​
Steps:
1.  Elements in their standard states are converted to gaseous atoms.
Atomization (delta H atom):  The standard enthalpy change is the delta H required to produce one mole of gaseous atoms.  The delta H atom for sodium is +109 kJ/mol.

2.  Combine gaseous anions and cations to form a solid ionic compound.
Ionization energy (delta H IE):  The standard enthalpy change is the delta H required for one mole of a gaseous element or cation to lose electrons to form one mole of positively charged gaseous ions.  Removing sodium's one valence electron has an IE of +494 kJ/mol.

3.  Lattice enthalpy (delta H lat): This is the energy required to convert one mole of the solid compound into gaseous ions.  Lattice enthalpy cannot be directly calculated, but values are obtained through Hess' Law for the formation of the ionic compound.
There are some different enthalpies that you need to be familiar with.

1.  Lattice Enthalpy is the standard enthalpy change (SEC) that occurs on the formation of one mole of gaseous ions from the solid matter.  Look at the example on page 358 in your text. The process is endothermic and data values are in the Data Booklet.

2.  Enthalpy of Atomization.  This is the SEC that occurs on the formation of one mole of separate gaseous atoms of an element in its standard state.  "M" sublimates and "X" has an atom removed.  Look at the example on page 358 in your text.

3.  Ionization Energy.  This is the SEC that occurs on the removal of one mole of electrons from one mole of atoms or cations in the gaseous phase.  Metals will have multiple IEs depending on number of electrons removed.  Look at the example on page 359.

4.  Electron Affinity.  The SEC on the ADDITION of one mole of electrons to one mole of atoms in the gaseous phase.  See page 359.

These are combined to construct a Born-Haber Cycle and find either heat of formation or lattice energy of an ionic compound.  To do this, add up the correct values for enthalpy changes.  Keep your Data Booklet handy.

The IB requires that you know the B-H Cycle for sodium chloride, magnesium fluoride, and magnesium oxide.  Examine the worked examples on page 360. 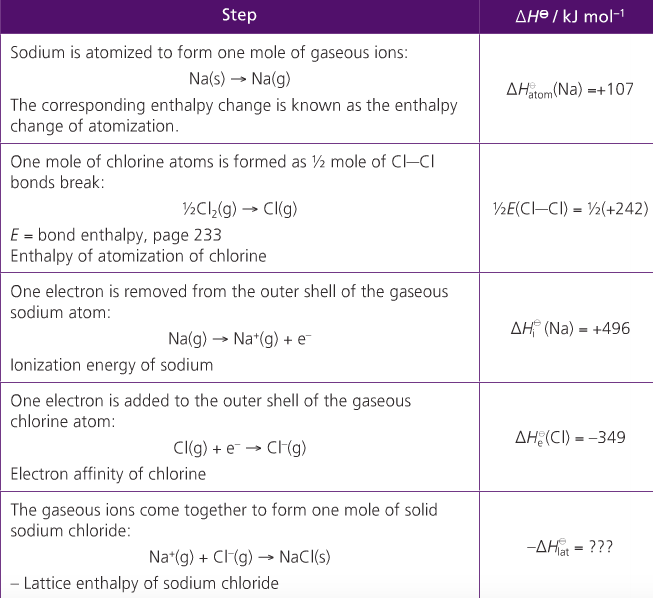 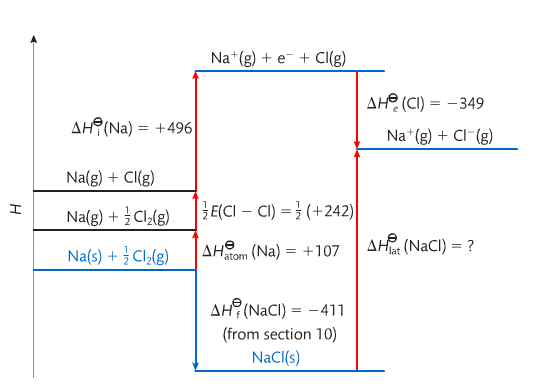 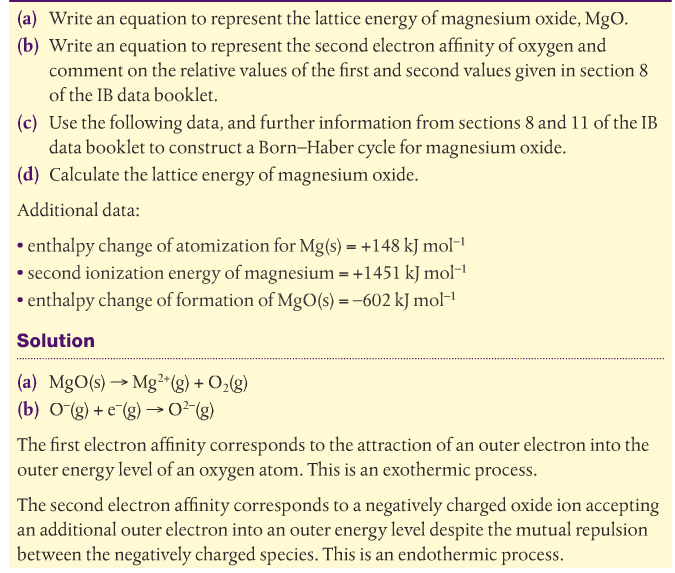 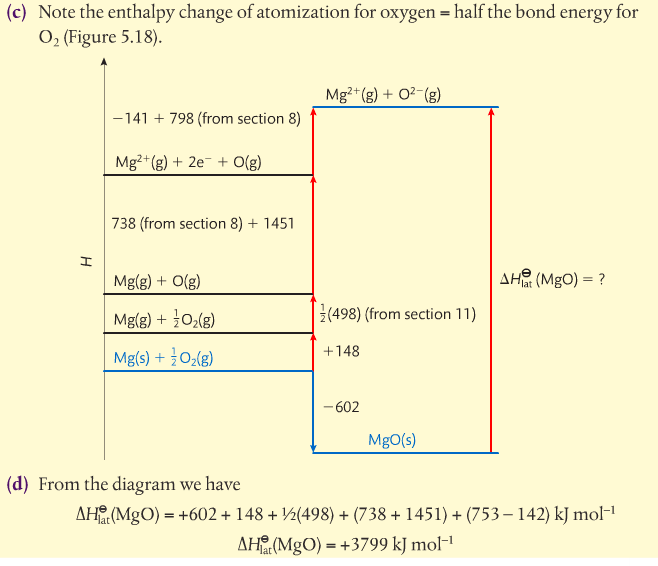 Enthalpy changes in solution look at the relationship between enthalpy change of solution, hydration enthalpy, and lattice enthalpy.

Terms to know: solvation (solvents used other than water), hydration (water as the solvent), and dissolution (homogeneous phase after solute has been added).

​
Entropy & Spontaneity
​
Mission Objectives:
1. Predict whether a change will result in an increase or decrease in entropy by considering the states of the reactants and the products.
2. Calculate entropy changes from standard entropy values.
3. Application of Gibbs' Free Energy equation in predicting spontaneity and calculations of various conditions of enthalpy and temperature that will affect this.
4. Relate G to position of equilibrium.

Entropy can be regarded as a measure of the disorder or dispersal of energy in a system to the arrangement of particles and the kinetic energies of particles in a system.  Example: an ionic solid versus a gas.  The gas has greater entropy because the particles are moving rapidly in all directions.  The ionic solid does not move.  Recall the laws of thermodynamics. The greater the shift from localized to widespread, the lower the chance of the particles returning to their original state and the higher the entropy of the system.

By examination of the reactants and products of a system, the change in entropy (delta S) can be predicted.  If the products are more disordered than the reactants, then delta S = positive.  If the products are less disordered than the reactants, then delta S = negative.  Entropy values are absolute values and can be measured experimentally via heat capacities.  Entropy values under standard thermochemical conditions for selected compounds are found in the Data Booklet.

Entropy is a state function, so a change in entropy is determined by the difference between final and initial values.

When completing entropy calculations, remember that values are specific for different states of matter.  Also recall that the coefficients used to balance the equation must be applied to molar entropy values when calculating overall entropy change.  Be sure to examine the chemical reaction and predict whether you expect the reaction to have a positive or negative entropy change based on the degree of disorder in the products and reactants.

The below images are from the Pearson (2014) text.

Watch the below videos.  Make sure you take notes, especially when he shows the different flowcharts showing how these terms relate to one another. 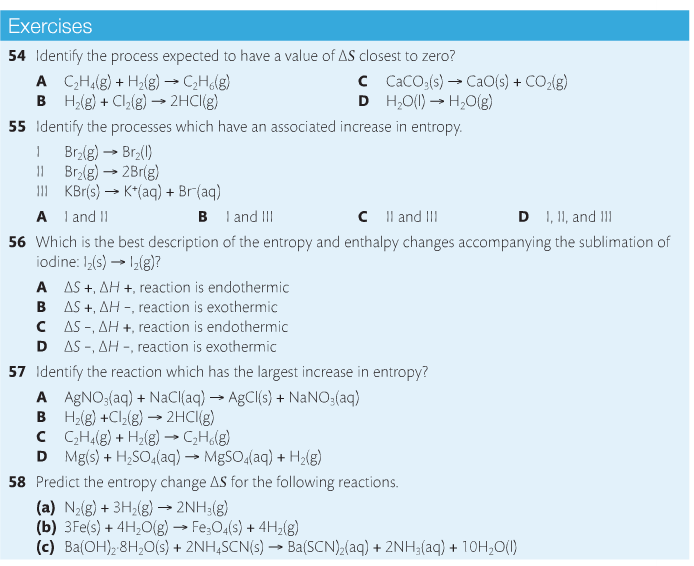 Gibbs' Free Energy (G) is a measure of the energy that is free to do useful work rather than leave a system as heat (Pearson 2014).  Gibbs' Free Energy is a state function, along with entropy, temperature and enthalpy.

​The below video goes into detail in the relationship between entropy, enthalpy and Gibbs' Free Energy.  ​ 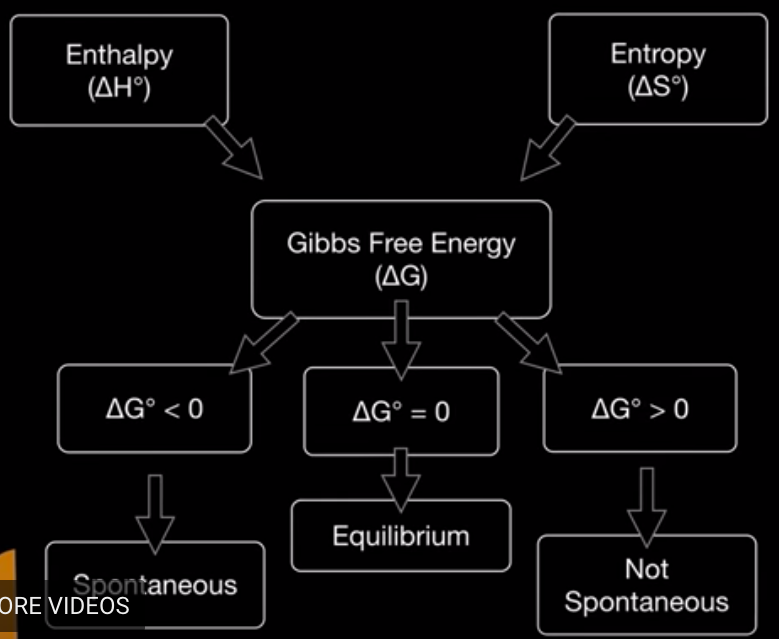 Gibbs' Free Energy provides an effective way of focusing on a reaction system at constant temperature and pressure to determine its spontaneity.  For a reaction to be spontaneous, G must have a negative value.  The table below, taken from the Pearson (2014) text, shows the factors affecting G and the spontaneity of a reaction.  There is a similar table in the Oxford text, on page 369. 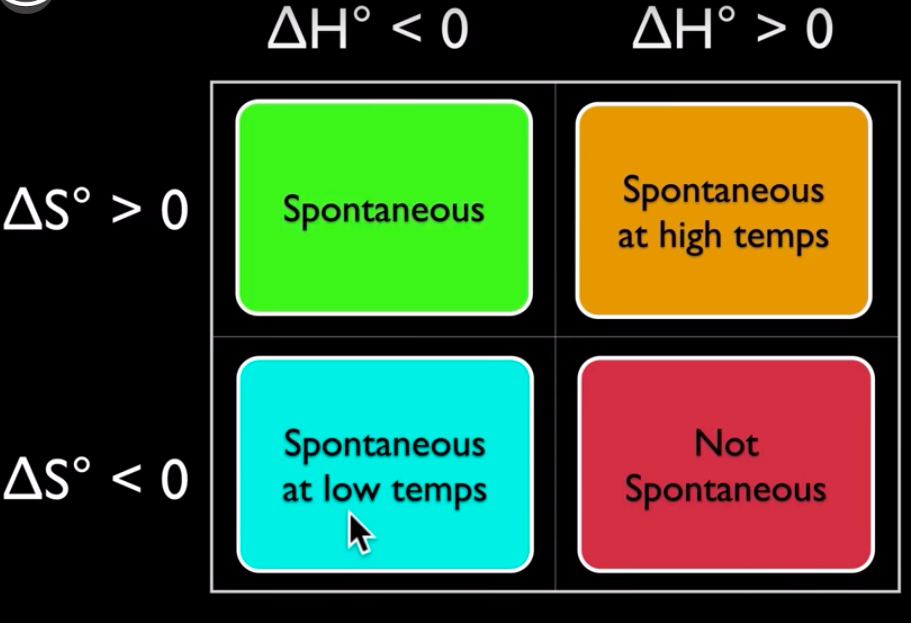 A reaction is said to be spontaneous when it moves towards completion or equilibrium under a set of conditions without external intervention.  In short, spontaneous reactions have a natural tendency to occur without outside assistance.  Usually, a spontaneous process involves an increase in the entropy of the universe.

Spontaneous reactions can be endothermic or exothermic.  They can occur very quickly or very slowly.

Reactions that do not take place under a given set of conditions are said to be non-spontaneous.  Non-spontaneous reactions would result in a decrease in the entropy of the universe. 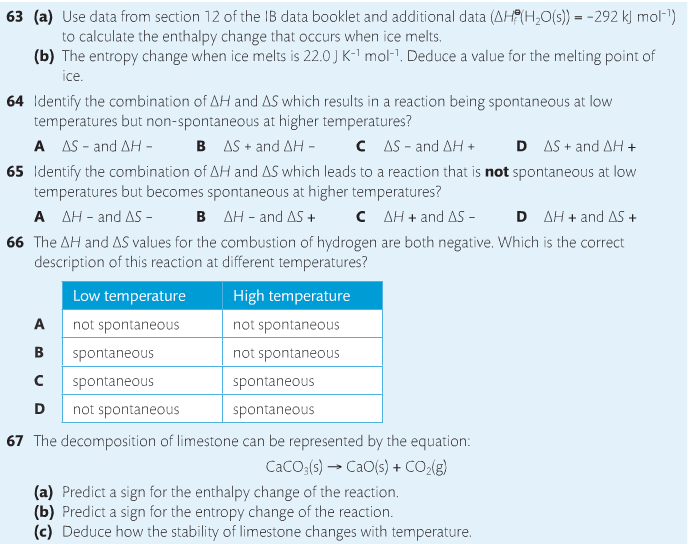 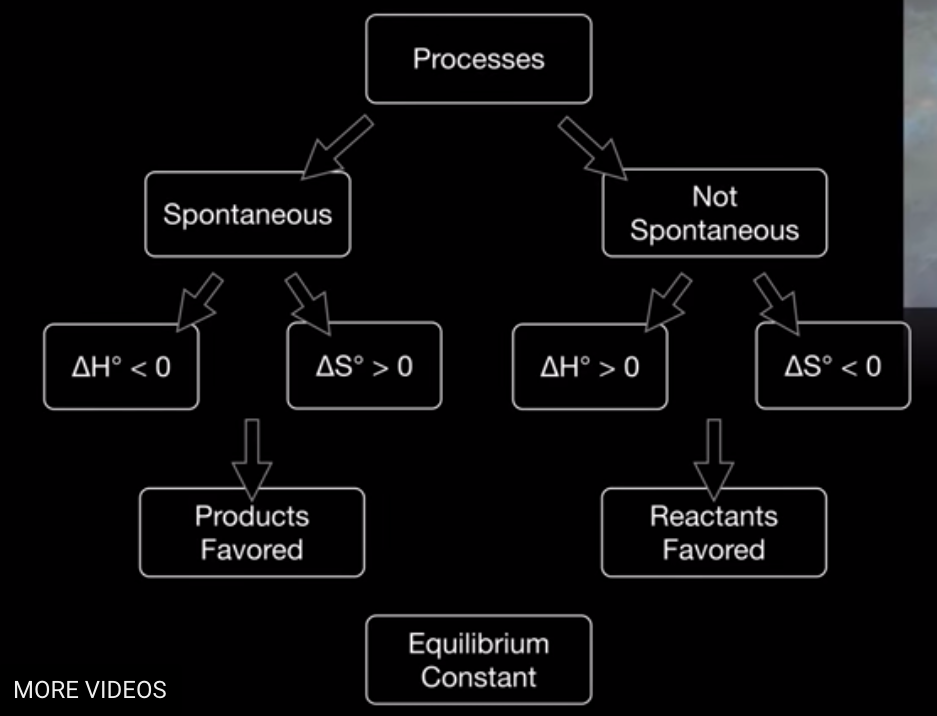