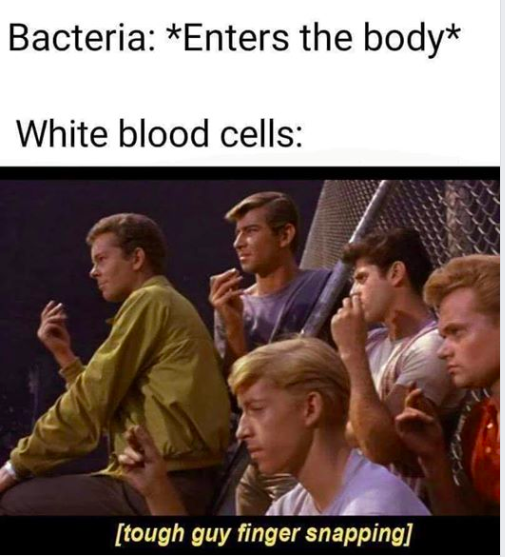 Student Missions:
Mission 1: Natural Born Killers!
Mission Objectives.  You should be able to...
1. Describe two ways that skin and mucous membranes defend the body.
2. Explain the roles of macrophages, neutrophils and other cells in combating pathogens.
3. Contrast the inflammatory response with the temperature response.
4. Recognize the four main types of immune system cells.
5. Explain the function of helper T cells in the immune system.
6. Contrast the role of B cells with that of killer T cells in fighting infection.
7. Explain how vaccination protects you against pathogens.
8. Identify the major organs of the immune system and their functions.
​
Our bodies are built to keep out pathogens.  Your skin  has two layers: dermis and epidermis.  The epidermis is what you see, and it is mainly dead cells that we lose constantly.  The dermis is alive by comparison.  It contains blood vessels, sweat glands, sensory receptors and structural cells called dermal cells.  Dermal cells rise to the top and become the epidermis.  As long as your skin remains intact, you are protected from most pathogens.  This is why open cuts and sores need to be cleaned and treated.

Some locations are not covered by the epidermis.  They keep pathogens out via mucous membranes.  These membranes produce mucus which trap incoming pathogens and prevent them from reaching cells they could possibly infect.  Such areas include the nasal passages, trachea, urethra and the vagina. 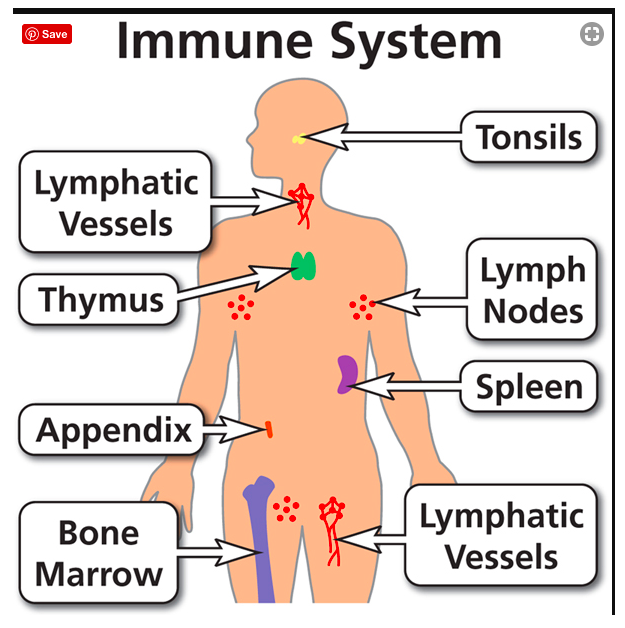 The immune system consists of a network of proteins, cells, and organs that work to protect our bodies from pathogens, such as bacteria, viruses, and fungi.  Above is an image of the major organs involved in the immune system.

The immune system protects our bodies from infection through natural barriers and adapts to provide immunity against infection by remembering invaders from previous illnesses.  Natural immunity occurs when we are able to resist illnesses due to a healthy immune system.  Acquired immunity is the ability to resist illnesses over time due to exposure to pathogens and the body's ability to remember said pathogen.

Mucus is one of the first lines of defense.  When pathogens enter the body, the immune system trigger membranes to produce excessive mucus to capture them and flush them out of the body.  The same thing happens when you cough.  Your body is trying to clear your lungs of excess  mucus that may contain pathogens.  Your immune system increases your body temperature in an effort to destroy invading pathogens.
Primary & Secondary Immune Response.  When a pathogen dares enter the body, the immune response begins.  The primary immune response (PIR) takes place when there is a first encounter with a particular pathogen.  If the pathogen has been in the body more than once, then secondary immune response (SIR) takes place.  PIR takes at least a week before any success is experienced.  By comparison, SIR is shorter and more intense, which is why symptoms are rarely experienced.

White blood cells (WBCs; also called leucocytes) fight off pathogens.  They also provide a level of immunity for pathogens we encounter more than once.  Macrophages are large WBCs that can change their shape to surround an invading cell through the process of phagocytosis.  As a result, they can get small enough to fit into capillaries.

There are four kinds of WBCs that participate in an immune system's attack: Killer T Cells, B cells, Helper T cells, and macrophages.  Killer T Cells do what their name suggests: they straight up murder infected cells. B Cells are snitches; they identify invaders for later destruction. Helper T Cells activate Killer T Cells and B Cells.
​
​Let's play a game.
Reproduction

Mission 2: Birdz n' da Beez...
Mission Objectives.  You should be able to...
1.  Describe the structure of a sperm cell and explain its function.
2.  Discuss the functions of the testes.
​3.  Trace the path taken by sperm from the testes to the outside of the body.
4.  Describe the functions of the female reproductive system.
5.  Explain how egg production differs from sperm production.
​
The below images are from www.slideshare.net.

The male reproductive system (MRS) produces male gametes, commonly known as sperm, and prepares them for delivery to a female’s body so that fertilization can occur.  Sperm are specialized carriers of genetic information that are formed after meiosis.  They consist of a head and a long tail, called a flagellum.  Digestive enzymes in the head allow a sperm cell to penetrate an egg.

Testes are the main organs of the MRS. Sperm are produced inside of them.  In addition to sperm production, the testes also secrete testosterone, the male sex hormone.  Two pituitary hormones regulate the function of the testes: lutenizing hormone (LH) and follicle stimulating hormone (FSH).  LH stimulates interstitial cells to release testosterone and FSH stimulates the seminiferous tubules to produce sperm.

The female reproductive system (FRS) produces female gametes, commonly known as eggs or ova.  Eggs are carriers of genetic material formed after meiosis.  Ovaries are the structures responsible for the production of gametes.  Females are born with all the eggs they will ever have.  They remain in a developmental holding pattern until puberty, and then one by one, mature every month and get released from the ovary.

The events of the ovarian cycle (the development of and release of the egg) is governed by the hypothalamus.  The ovarian cycle has two phases: follicular and luteal.  When an egg is released from the ovary, it travels through the organs of the FRS with the objective of getting fertilized.  If fertilization does not happen, then the ovum passes out of the female’s body via menstruation.

Paul Andersen of Bozeman Science is on the case.  Start the video at 2:00 and stop at 7:00.
This is as much as you need to know about the reproductive systems for now.  You will go into detail if you take upper level biology classes.  But you can review structures with the following quizzes:        Chicks          Dudes
Proudly powered by Weebly