Student Missions:
Mission 1: Energy.  Some Days Are Better Than Others.
Mission Objectives.  You should be able to:
1.  Explain how heat is a form of energy
2.  Describe temperature as a measurement of kinetic energy
3.  Explain the conservation of energy in chemical reactions
4.  Compare endothermic and exothermic reactions
​5.  Explain the concept of system and surroundings
​
Some things you should know.  Temperature and heat are not the same thing.  Heat is energy that results from a temperature change and produces an increase in disorder in how particles behave.  Heat increases the average kinetic energy of molecules, which is measured by temperature.  Professor Dave, aka Chemistry Jesus, explains it all.
Chemical reactions are accompanied by energy changes.  Bonds are broken and formed in reactions, which correspond to an increase or decrease in energy,  Energy is the ability to do work or move an object against an opposing force. Examples of energy are light, electricity, sound, heat, and chemical energy are absorbed or released during chemical reactions.

In order to do thermodynamic work, you need to understand the concept of system & surroundings.  The system and surroundings must be defined in any example.  The system is the area of interest and the surroundings include everything else. Most systems are open and interface with the surroundings.  Some systems are closed and do not interface.  The total energy in a system and its surroundings do not change.
Heat contents of a system is called enthalpy.  A system is a heat reserve.  Changes in energy are denoted by "delta H."  Delta H is positive when heat is added and negative when heat is released.
Examine the diagrams on page 141.  It shows the relationship between a system and its surroundings and how they look on an energy curve.  Energy curves are endothermic or exothermic.

Enthalpy is stored in chemical bonds and intermolecular forces as potential energy. When substances react, the difference in the enthalpy between reactions and products produces an enthalpy change that can be observed.

​Standard enthalpy changes are a set of conditions (which should be in your data booklet) are the following:  100 kPa, a concentration of 1 mol/dm3 (1M) for all solutions, and all substances in their standard states.  Temperature is usually not a part of these conditions, but is normally included as 298K. 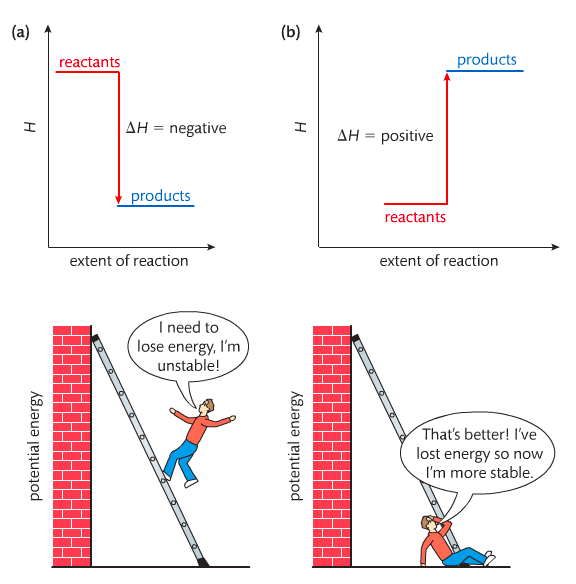 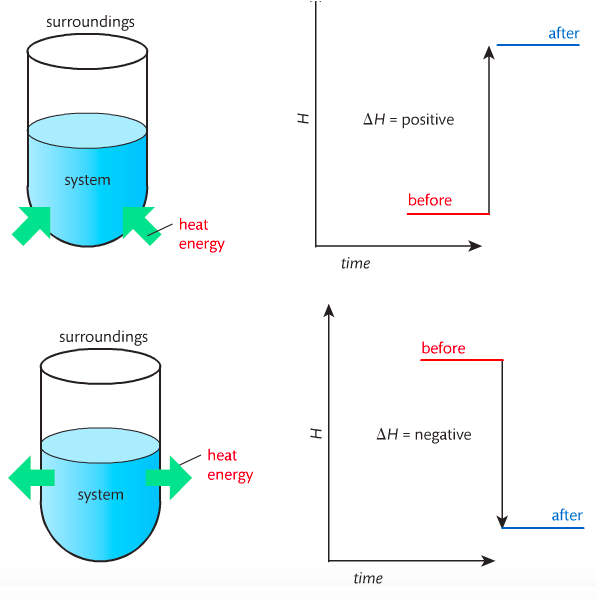 ​The formula for specific heat is

Enthalpy Changes.  The direction of change is in the direction of lower stored energy. Chemicals change in a way that reduces their enthalpy.  It is expected that a reaction will occur if it leads to a reduction in enthalpy.  Products in an exothermic reaction are more stable than the reactants, but stability is a relative term.  The sign of delta H is a guide for the likely direction of change, but it is not 100% reliable.  Endothermic reactions do occur when there is an increase in the disorder of a system; for example, when gases are produced.

The below videos define and explain enthalpy changes of combustion and formation.  You'll need to use the data booklets to find these values.  The first video talks about definitions.  The second video, from the awesomely named Mike Sugiyama Jones, shows how to complete both types of problems, so take notes.
The standard enthalpy change of combustion (delta H c) is the enthalpy change for the complete combustion (or burning) of one mole of a substance in its standard state in excess oxygen under standard conditions.

The standard enthalpy of formation (delta H f) is the change of enthalpy during the formation of 1 mole of the substance from its constituent elements, with all substances under standard conditions. 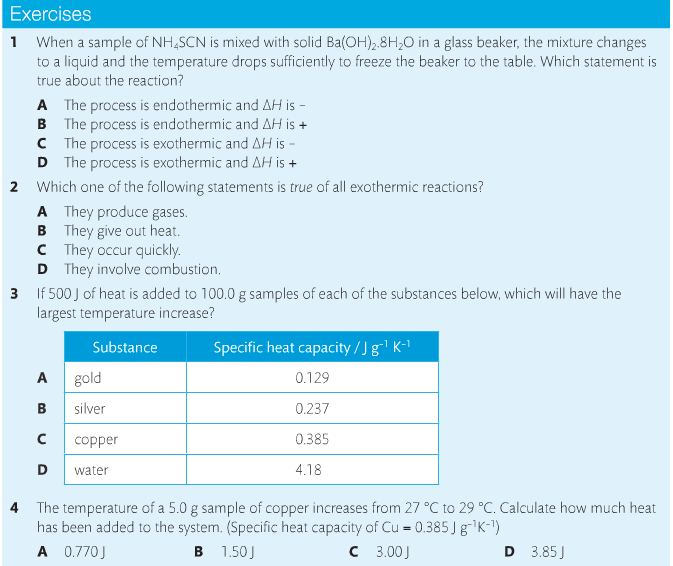 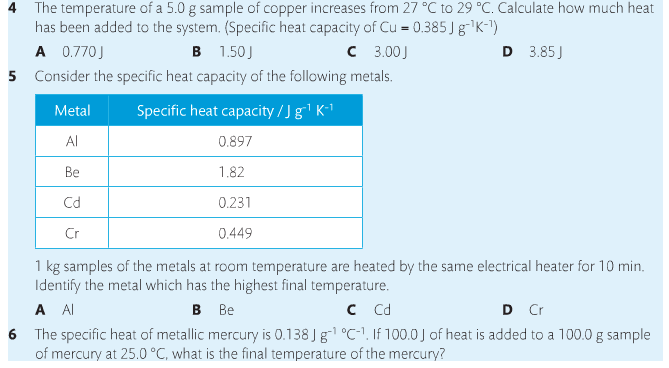 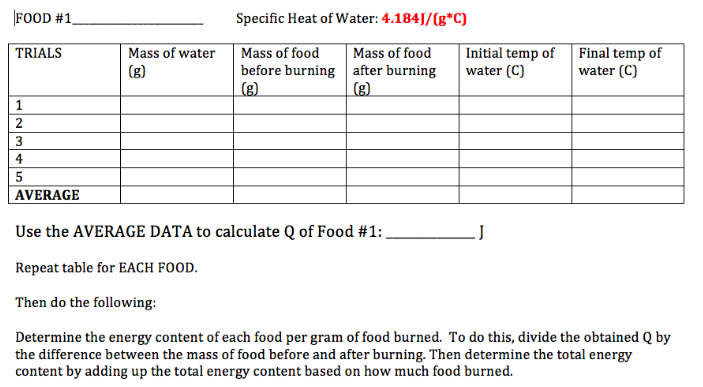 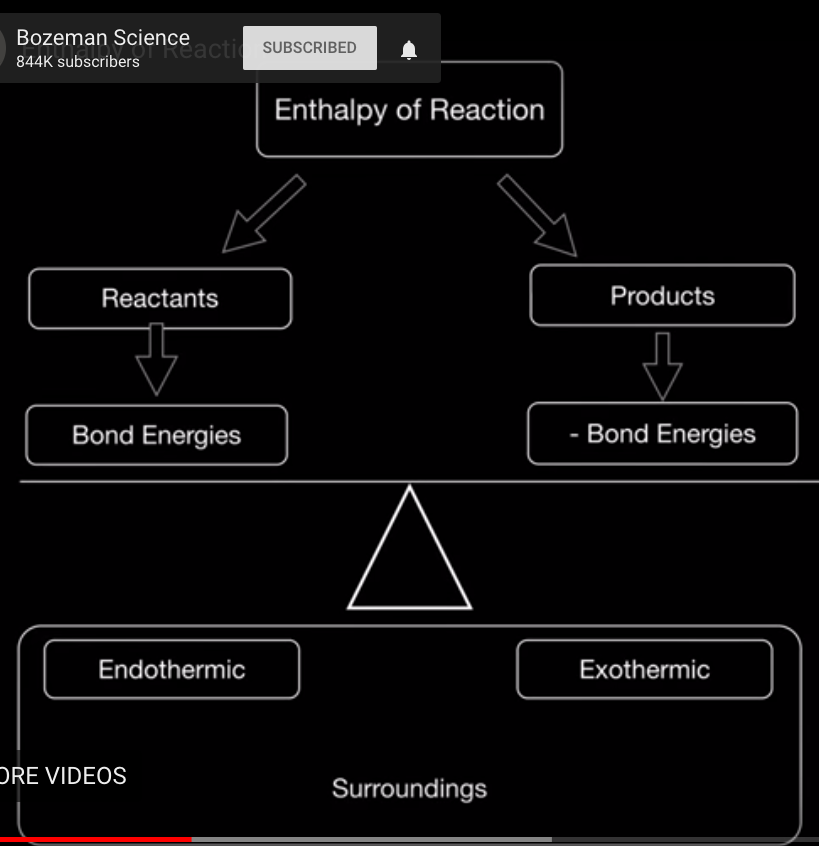 Chemists have developed a method to measure enthalpy changes of a reaction using an indirect route.  The enthalpy change for a particular reaction is calculated from the known enthalpy change of other reactions.  Energy cycles are diagrams that show the enthalpies of reaction over each step of the reaction.  This is something we will cover in detail in HL, but it is okay for SL to see what an energy cycle looks like and how it works.

If you look at the following image (Pearson 2014) in the clockwise route, the elements (H and O) are first combined to form ethanol (C2H5OH) and then the ethanol is burned or combusted.  The numbers in red and blue are the experimentally determined enthalpy changes. So if you add up delta H1 and delta H2, you should theoretically get delta H3.

Hess' Law is an application of the conservation of energy law.  A chemical equation shows the net reaction; it is a summary of a number of different reactions which are added together and result in an overall reaction.  We will spend time working on questions in class.

The first video from Bozeman Science talks about enthalpy diagrams and introduces Hess' Law.  The second video, from Richard Thornley discusses Hess' Law using practice problems.  After the videos, you will see some practice problems from the Pearson text. 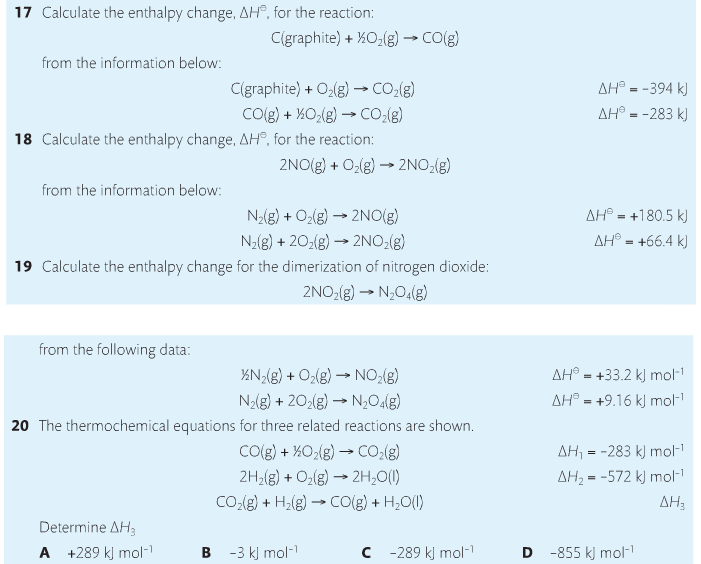 Mission 4: Bond Enthalpy.
Mission Objectives.  You should be able to...
1. Calculate the enthalpy changes from known bond enthalpy and comparison of these with experimentally measured values.
2.  Sketch and evaluate potential energy profiles in determining whether reactants or products are more stable and if the reaction is endothermic or exothermic.
3.  Discuss the bond strength in ozone relative to oxygen and its importance to the atmosphere.

Mr. Thornley is on the case. You will want to take notes from this video.  He lays it out all clear and proper-like. 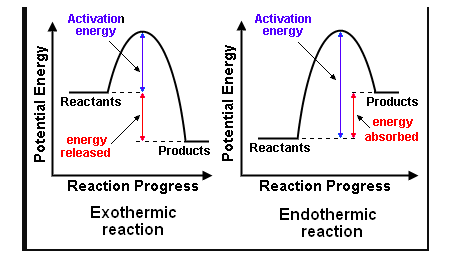 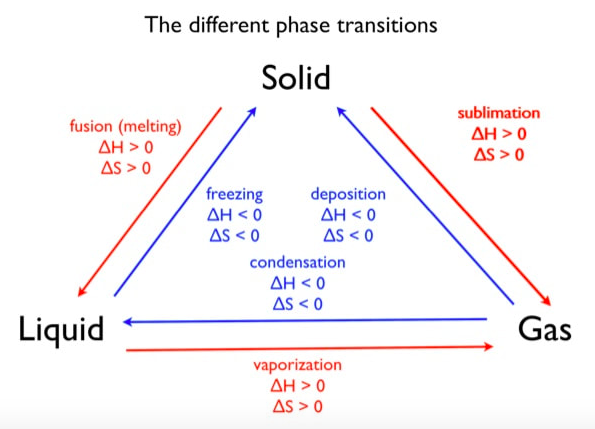 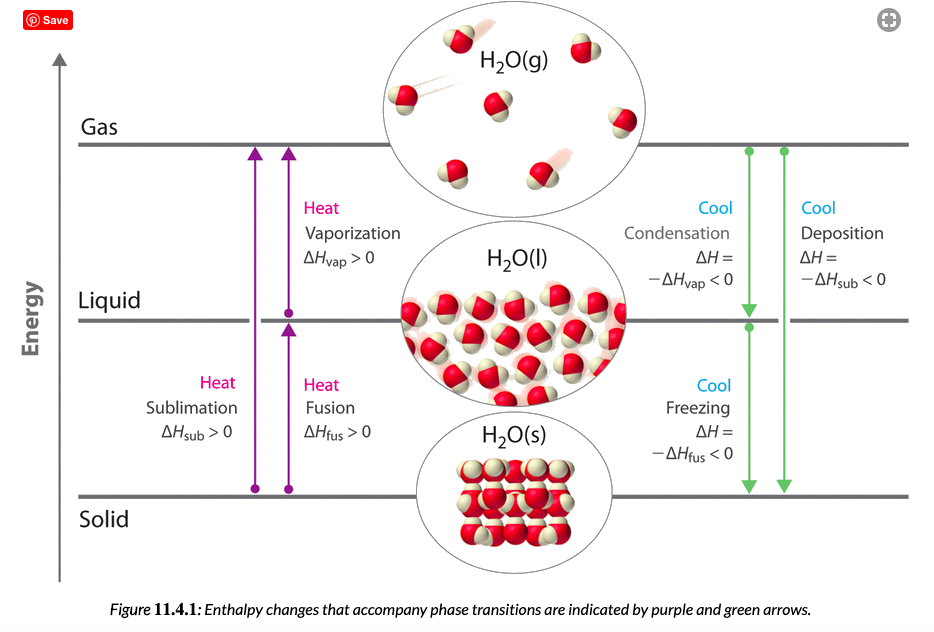 HOMEWORK:  Practice problems from the text and the packet. 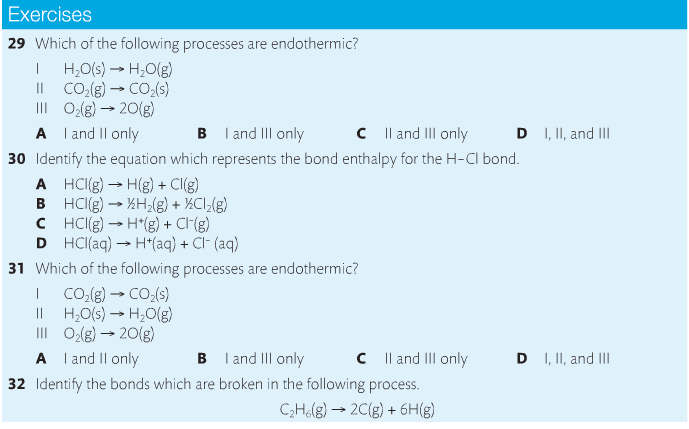 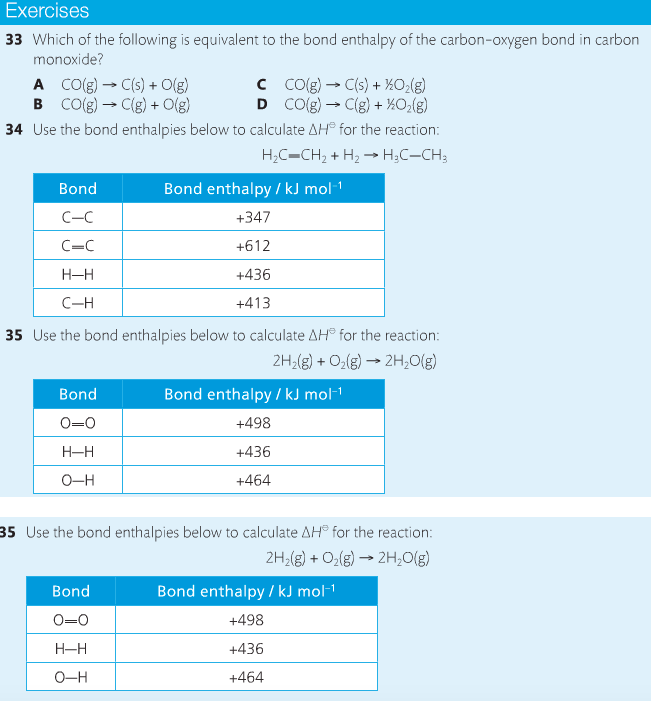 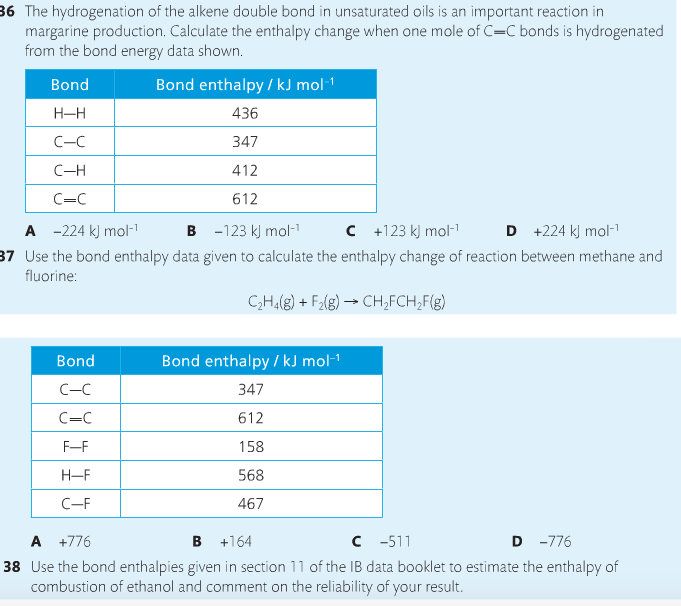