Housekeeping:  We are now investigating uniform and accelerated motion.

For this unit, I am giving you a reading guide and several packets, which contains some of the notes you'll need to fill in.  Below, in Content Review, I have included a link to an online physics textbook that you will find useful (and that I'll assign readings from when necessary).

So let's get into it.
Then go to the Hypertextbook and read Kinematics 1, 2 & 3.  After that, watch the video.
Let's play around with the concept using pHet's Moving Man simulation. 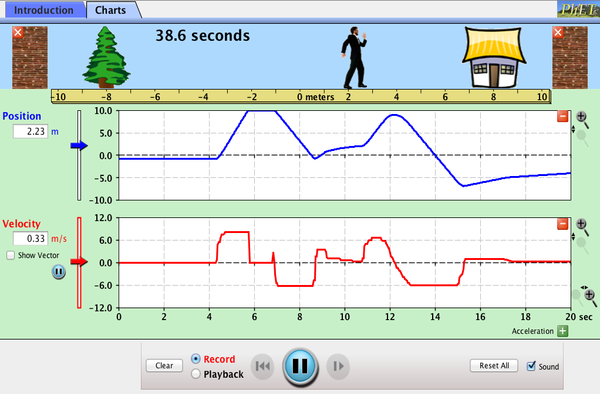 Acceleration is merely the change in velocity divided by the change in time.  We are going to revisit an earlier video so that you can learn to calculate acceleration given position and time.  Then you will work on graphing all three quantities.

Let's talk about displacement.  Basically, distance is a scalar quantity that describes movement between locations over an actual path connecting them.  Displacement is a vector quantity that describes movement between locations over the shortest path connecting them.
Mission 2: Speed Demon
Mission Objectives: You should be able to...
1. Define "acceleration" in your own words.
2. Calculate acceleration given position & time graphs
3. Draw and interpret an acceleration-time graph
4. Use the motion equations in problem solving.
So if you were to do one lap on a standard track (400 m) and return to where you started, your distance would be 400 m, but your displacement would be 0 m because you ended up exactly where you began.

Take a look at these practice problems.  Try to solve them before checking your answers.

I introduced the concept of acceleration last Wednesday, but we're really going to get into it this week as part of your prep for the Hot Wheels lab.

Before we do that, let's watch this clip from the movie Armageddon.
What you're seeing is the acceleration of the shuttles to reach maximum velocity in order to catch up with the asteroid.  The pilots used the gravity of the moon as an assist to reach the maximum velocity of 22,500 mph.

Also, for the record, they shouldn't be able to breathe at that speed, much less scream.  The immense G forces over that length of time should crush their lungs to the point where they can do little more than gasp for air and likely pass out.  The maneuver would very likely kill them.  However, this was a totally fun movie (in spite of the crap science) and I had a blast watching it in the theater.

Practice Problems
​
​You'll start preparing for your first motion quiz by completing the below assignment. 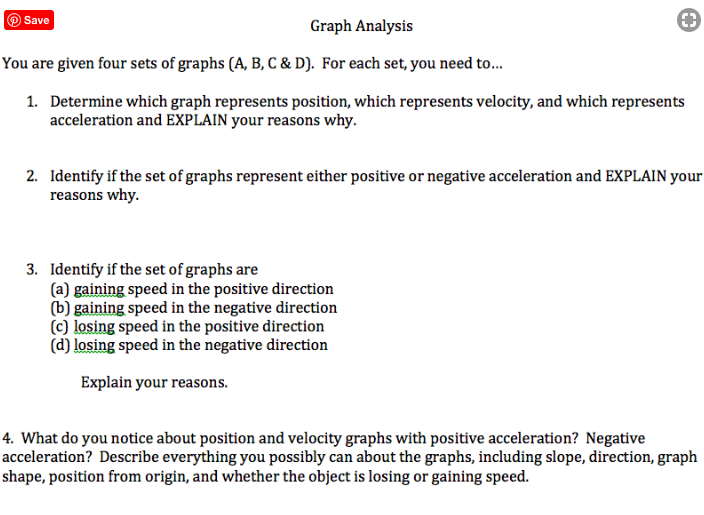 2.  If the velocity-time graph lies in the 4th quadrant, then the object is losing or gaining speed in a negative direction.


For the following exercise, you will work on your own.  You have 60 minutes to complete the problem.  You may use your notes.

You are given the following data. Do the following:  (1) Calculate velocity and acceleration.  (2)  Graph position, velocity, and time.  (3)  Describe the velocity and acceleration graphs in terms of gaining/losing speed and +/- direction. Make sure each graph has a title and labeled axes with units.  Remember that you must have three separate graphs.

Use Excel to do the calculations and graphs.  Put everything in one document and upload it to Managebac under "Motion Practice Problem."

This term's project is to construct a race track for Hot Wheels that has an incline.

Below is the Hot Wheels Presentation Design

Download File
We will use PhysicsTracker to analyze the Hot Wheels data.  You should read through the HowTo and watch the below video to learn how to use it.  PhysicsTracker will automatically incorporate Java, so you don't need to download it.  After you have downloaded the tracker software, open up a new file and drag your video into the video box.  From there, you will calibrate and mark your Hot Wheel as it moves down the track.

You're going to have to watch this several times (I did) to get the hang of it.
Proudly powered by Weebly