Mission 1:  Live or Die; Make Your Choice.
Mission Objectives.  You must be able to...
1.  Define and explain "natural selection" using examples.
2.  Identify the causes of variation between individuals in a species.
3.  Define and describe, using examples, what an adaptation is.
4.  Explain what happens when there are too many offspring.

Natural selection is the mechanism for evolution.  This means that there is an overproduction of offspring and the presence of natural variation in the population.  Eventually, there will be a struggle between competing varieties that leads to survival for some and death for others.
In species where there is variation, a change in the environment will eliminate some but not all members of the population.  There are three main mechanisms that give organisms in a species their variation:  DNA mutations, meiosis, and sexual reproduction.

DNA Mutations.  Sometimes a mutation can produce a characteristic that is advantageous. In each generation, only a few genes mutate and most mutations produce effects that aren't harmful or useful.

Meiosis.  Sexual reproduction is a much more powerful source of variation in a population because thousands of genes are mixed and combined.  As you'll recall, meiosis enables the production of haploid cells to make gametes.  Meiosis produces four cells that are genetically different from each other and only contain 50% of the parent cell's genome.  It is near impossible for a woman to produce the same egg twice. Identical twins come from the same egg.

The variety in gametes comes from random orientation in the lineup during metaphase I.  In addition to this, crossing-over contributes to the shuffling of genetic material and further increases genetic variety.

Sexual Reproduction.  If there is no variety in a population, there is a limited number of outcomes: the whole population will either survive or die.  Read about the potato blight that lead to the Great Famine of Ireland.

More genetic possibilities lead to more possible outcomes; some members of the population survive without any adverse effects, others may be negatively affected but still survive, and others may die.  Variety in the population allows some individuals to be better adapted to whatever change in the environment is harmful to others.

Find five examples of natural selection in populations, describe them and explain the effects.

An organism that has characteristics that are well adapted for its environment is said to be fit.  Natural selection tends to eliminate from a population individuals that show low fitness.  There is no guarantee that fitness will allow survival or that survival will allow reproduction.  In order to reproduce, an organism must survive first.  Plants and animals produce far more offspring than could ever survive.  The reason for this is to maximize the changes of some offspring surviving as it is expected that most of the offspring will die one way or the other.  See the below image from the Pearson text.

There is a high demand for ecosystem resources, but there is a limited supply.  The consequence is competition for these resources in order to stay alive.  This is called the struggle for survival.  Many species of animal defend their resources and as a result, it is difficult for a new arrival to find enough resources.  Because of this, parents send out hundreds of potential offspring into the world.  Parents that do not produce as many may find the probability of their genes being passed on greatly reduced.

Below are the steps of evolution by natural selection from the Pearson text: 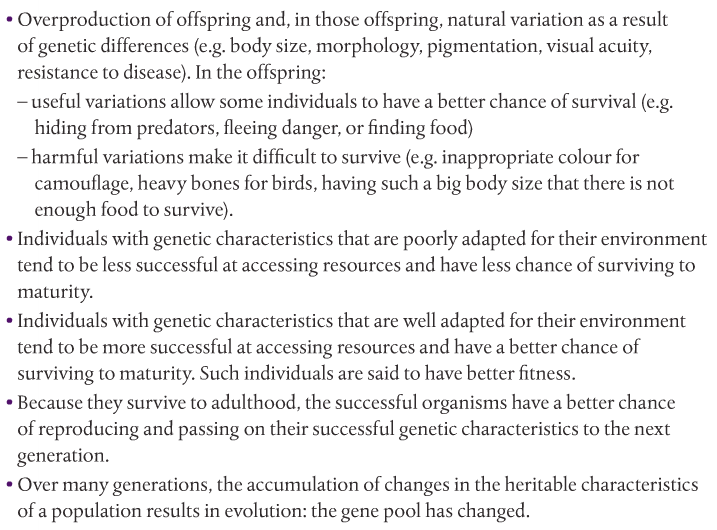 You will be given a reading packet from the Pearson text that describes some examples of natural selection at work.  Evolution is considered to be a long-term process, but the natural selection mechanisms can sometimes be quick and take place over months, years and decades, rather than millennia.  As you read, see if you can identify the main features of how natural selection works: variation in the population making some individuals better suited for their environment than others, overproduction of offspring leading to the struggle for survival, differentiated survival, and the passing on of successful traits to the next generation.

Let's watch a clip from Cosmos about the evolution of the eye.  Pay careful attention to the different perspectives.  How would you explain this in terms of natural selection?
Mission 2:  Follow the Evidence.
Mission Objectives.  You must be able to...
1.  Define and explain "evolution."
2.  List and describe the evidence for evolution.
3.  Explain the reasoning behind and the effects of artificial selection.
​4.  Explain the difference between parallel, convergent and divergent evolution.
5.  Evaluate the evidence of evolution for the peppered moth.

​​Evolution is defined as the process of cumulative change in the heritable characteristics of a population.  "Heritable" means the changes must be passed on genetically from one generation to the next.  "Cumulative" means that one change is usually not enough to have a major impact on a species. "Population" means that the changes do not affect just one individual.  Over time, a new species can arise.  This process is called speciation.  The members of the new population will be different enough from the existing population that they came from that they will no longer be able to interbreed.  All life on Earth is unified by its common origins.

Three examples of evolution by natural selection are focused on: (1) the fossil record, (2) animal breeding, and (3) homologous structures.  Dan Rott gets into it in the following video.
Artificial selection is the deliberate breeding of animals to produce a set of desired genetic characteristics.  Over time, this process has led to certain varieties of animals that have combinations of characteristics that did not exist before.  Artificial selection is not the driving force of evolution in natural ecosystems.

Homologous structures are anatomical structures that are similar in form but are found in seemingly dissimilar species.  An example  of this is the five-fingered limb, which is found in whales, bats, humans, box turtles and dolphins.  These limbs are called pentadactyl limbs ("penta" means 5 and "dactyl" means fingers).  The general format for these limbs are the same, even though the functions of the limbs may be different.  Homologous structures are potential bits of evidence for evolution because the organisms in question have a common ancestor. Watch this video and then complete the activity below. 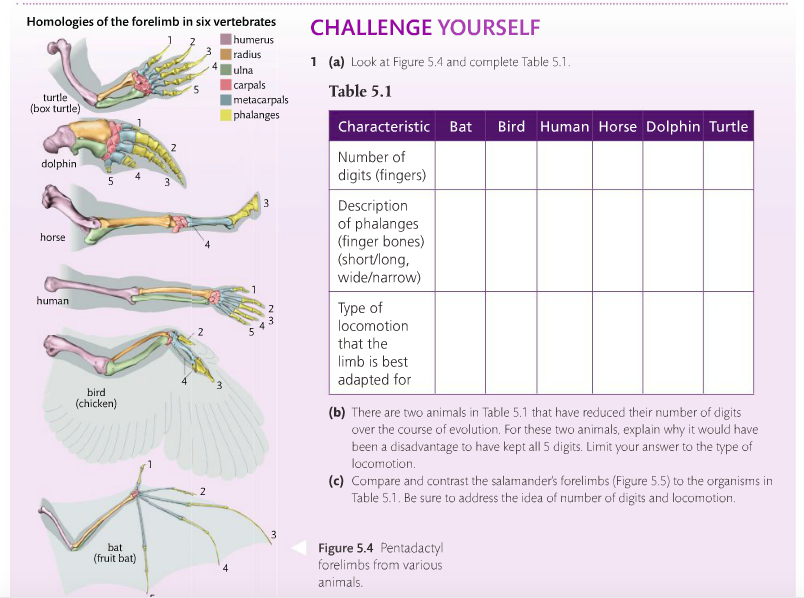 Incompleteness of the fossil record.
Transient polymorphism (different versions of a species ["polymorph" means many shapes]) is demonstrated by the peppered moth (B. betularia).  ​​Read the below passage from the Pearson text and look at the map and then answer the questions.  I included a link to help you out. 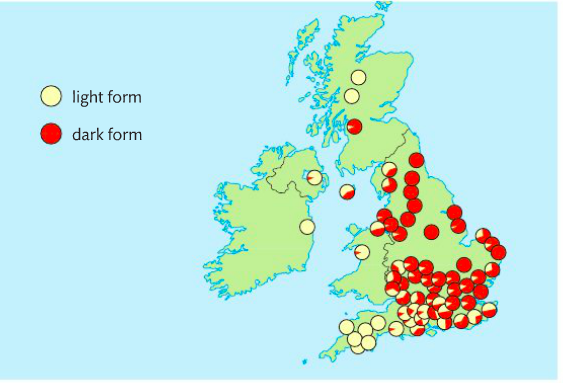 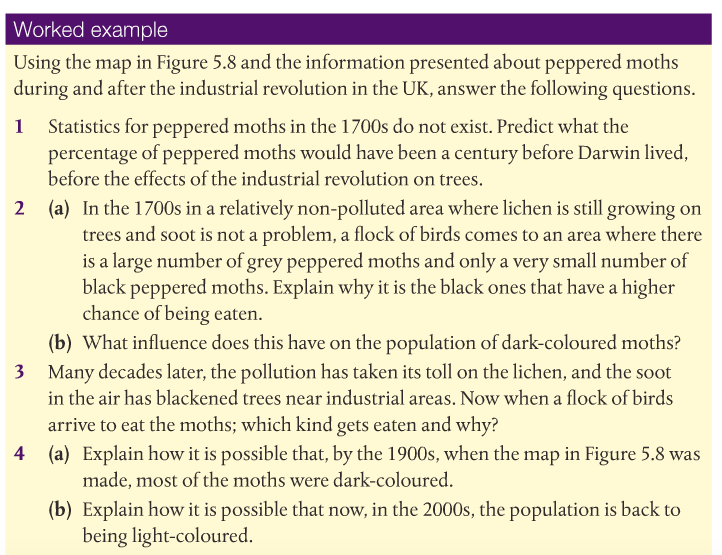 Mission 3: Who Are You...or, What Are You?
Mission Objectives.  You should be able to...
1.  Classify two plant and two animal species from domain to species level.
2.  Recognize features of Bryophyta, Filicinophyta, Coniferophyta and Angiospermophyta.
3.  Recognize features of Porifera, Cnidaria, Platyhelmintha, Annelida, Mollusca, Arthropoda and Chordata.
​4.  Recognize features of birds, mammals, amphibians, reptiles and fish.
5.  Construct a dichotomous key and use it to identify specimens.

Binomial Nomenclature.  "Bi" means "two","nomial" means "name", and "nomenclature" refers to a system used to name things.  This system was developed by Carolus Linneaus in 1735.

The below diagram, from the Pearson text, is a simplified way of showing relationships between eight species from two phyla in one kingdom.  It is impossible to show the relationships of the hundreds of thousands of species in each of the kingdoms in this way.  If you flip this diagram, it resembles a tree with the kingdom being the trunk and the domain being the root.