Mass spectrometers are designed to determine the relative atomic masses of elements. There are five stages in the process: vaporization, ionization, acceleration, deflection and detection.  Samples are heated and vaporized to produce gaseous atoms and molecules and then bombarded by high energy electrons, generating positively charged species.  he positive ions are accelerated into an electric field and deflected by a magnetic field that is perpendicular to their path (recall the video).

The degree of deflection depends on the mass to charge ratio (m/Z).  The species with the smallest mass (m) and highest charge (Z) will be deflected the most.  Particles with no charge are not deflected.  The detector then detects species of a particular m/z ratio.  The ions hit the counter and the electric signal is detected.  It is a plot of relative abundance (of each isotope) versus mass number (A).  Peak height indicates the relative abundance of the isotope.

Study the worked example on pages 48-49 in your text.

When white light is heated and/or passed through a prism, a continuous spectrum is produced.  If a pure gaseous element is subjected to an electrical discharge, the gas emits radiation.  The result is an emission spectrum.

If a cloud of cold gas is placed between a hot metal and a detector, an absorption spectrum is produced.  The gaseous atoms absorb certain wavelengths (which show up on the emission spectrum).  See below.

Absorption and emission spectra are used in astronomy to analyze star light.

The lines in an emission spectrum have specific wavelengths.  Each corresponds to a discrete amount of energy.  This is called quantization.  A photon (discrete packet of light) is a quantum of radiation and relates wavelength and energy.  Look at the relationship between speed of light and Planck's constant (page 52).  As a result, Bohr used this information to describe electron behavior in the hydrogen atom.  The electron orbits the nucleus the same way planets orbit the sun (hence the name "planetary model").  The acceleration of the electron moving at high velocity keeps it in orbit.  Each orbit has a definite energy associated with it: the energy of the orbiting electron is quantized.

When an electron is in the ground state and becomes excited, it absorbs energy and jumps to a higher level.  When the electron falls back down to a lower energy level, it releases energy in the form of light (a photon).  The photon corresponds to a particular wavelength.

​Bohr's model works only for hydrogen.  The reason it doesn't work for other elements is because (1) it assumes that the positions of the electrons are fixed, (2) it assumes that energy levels are circular, and (3) it suggests an incorrect size scale for atoms.
Mission 2:  SUPERMODELS!
​Mission Objectives.  You should be able to...
1.  Describe Heisenberg's and Schrodinger's contributions to atomic theory.
2.  Explain how the quantum mechanical model (QMM) works.

The Bohr model is the standard, and even though it is outdated, it still provides a simplistic understanding of how electrons behave when energized.  Research done by Werner Heisenberg & Erwin Schrodinger in the 1920s & 1930s produced a different understanding of the atom.

The Bohr model fails with elements beyond hydrogen because it assumes that the electron's trajectory can be precisely described.  This is not true because any attempt to measure an electron's position disturbs its motion or velocity.  This principle is called Heisenberg's Uncertainty Principle: an electron's position and velocity cannot be known simultaneously because manipulating one affects the other.  The best that can be hoped for is a probability of where the electron is likely to be.

Schrodinger came along and, using the principles of wave/particle theory, proposed that a wave equation can be used to describe electron behavior in the same way light behavior is described.  The equation works for hydrogen and elements beyond hydrogen, and the solutions to the equation are known as atomic orbitals.  These are regions of space around the nucleus in which there's a 90% chance of finding an electron.  Orbital shape depends on the energy of the electron.
Make note of the chart that she draws to denote the relationship between principal energy level, sublevel, & number of electrons held.  This information corresponds to pages 76-77 and is much easier to understand.  You are expected to know the shapes and names of s and p atomic orbitals.

Mission 3: There Are Always Rules.
Mission Objectives.  You should be able to...
1.  Describe the arrangement of electrons in the quantum mechanical model.
2.  Draw orbital diagrams and write electron configurations for elements 1 - 36.
​
There are three rules for writing electron configurations and drawing orbital diagrams. They are listed here.  Take a look and make sure you understand each one.  Corresponding pages in the textbook: 56 - 58.

This is the shorthand version of all this information: When describing the arrangement of an element's electrons, it is important to understand that (1) you must begin at the ground state, which is the energy level closest to the nucleus (n = 1) and work your way up, (2) there are four sublevels (s p d f) within each principal energy level; each sublevel has a particular shape called an orbital, and (3) each orbital can hold a maximum of two electrons spinning in opposite directions.

This model of the atom, compiled from the research of Schrodinger, Heisenberg, and a few others, is called the Quantum Mechanical Model.  It is a mathematical model explained  by four quantum numbers. 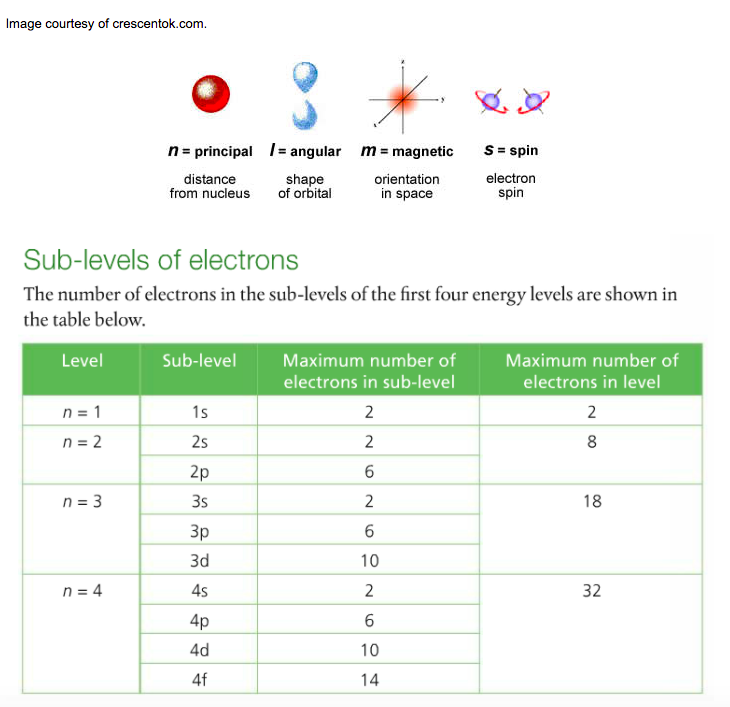 We will work our way through the first 36 elements.  Make sure you have your periodic table on hand.