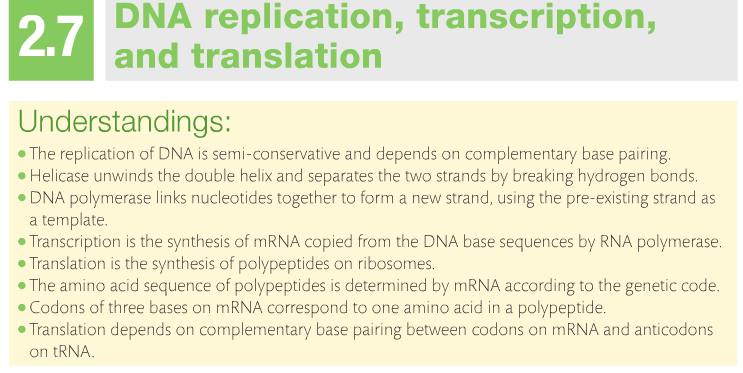 The sections of DNA that code for polypeptides are called genes.  Any gene is a specific sequence of nitrogenous bases found in a specific location on a DNA molecule.  DNA is found in the nucleus, but proteins are synthesized in the cytoplasm.  So a molecule called mRNA is used to carry the DNA message from the nucleus to the cytoplasm where the enzymes, ribosomes, and amino acids are found.  "m" stands for messenger. 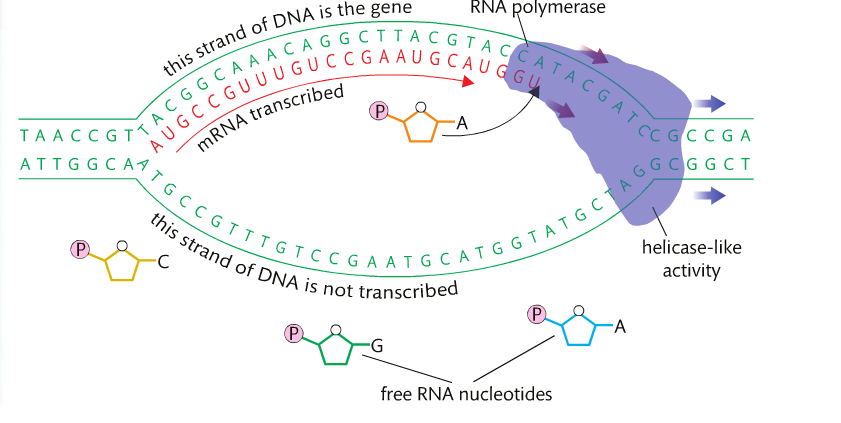 The process of transcription goes as follows:  A section of DNA (a gene) unzips into two single strands.  RNA, a single-stranded molecule, will link with one of the strands to form the mRNA molecule with RNA polymerase used to catalyze the reaction. Free RNA nucleotides float into place by complementary base pairing.  Uracil, a nitrogenous base specific only to RNA, pairs with adenine.

Only one of the DNA strands is copied.  mRNA is a short strand that is a complementary copy of a single gene.  The image above shows the transcription process.  The center oval is the gene that's been split by RNA polymerase.  mRNA (in red) begins transcribing the separated strand using free nucleotides in the cell.  Only one strand of DNA is copied.

The genetic code is written in triplets.  The mRNA molecule is a complementary copy of one gene of DNA.  The sequence of mRNA nucleotides is the transcribed version of the original DNA sequence.  The sequence of nucleotides making up the mRNA is enough to make one polypeptide.  The message written on mRNA is the message that determines the order of the amino acids.  It was since discovered that the genetic code is written in a "language" of three bases that contain enough information to code for one of the 20 amino acids.  These are called triplets.  When a triplet is found in mRNA, it is called a codon or a codon triplet. 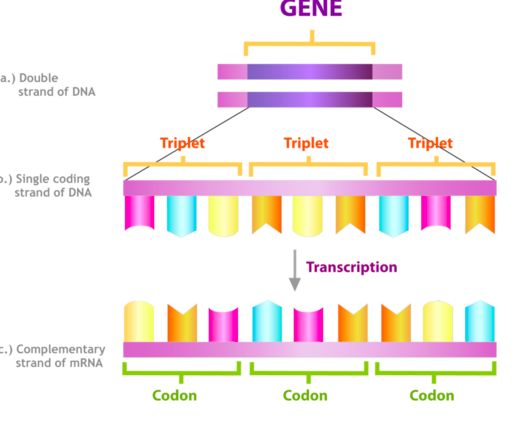 ​The process of translation is like a train that picks up codon triplets and drops off amino acids to form polypeptides.  If you examine the above image, the messenger RNA has come from the nucleus with the complementary copy of the DNA molecule. It passes through the ribosome where it meets up with a tRNA molecule that has a complementary anticodon to the first codon triplet of mRNA.  Then a second tRNA "train car" enters the ribosome with its own specific anticodon to bond with the codon on mRNA, and so on.

Once there are at least two amino acids formed, an enzyme then catalyzes a condensation reaction between the aminos to create a peptide bond.  The final codon is not an amino acid, but a signal to stop the translation process.

There are 20 naturally occurring amino acids.  Each one has a specific genetic code.

PCR, or polymerase chain reaction, is a process that is used frequently in forensic science.  It is a method by which short segments of DNA can be replicated in the  lab to produce enough of the molecule for testing.  An enzyme used in PCR called Taq polymerase, found in hot springs bacteria, is very stable at high temperatures and as a result, does not denature in the PCR process.

Practice problem:  Imagine that an mRNA leaves the nucleus of a eukaryote with the following base sequence:  AUGCCCCGCACGUUUCCAAGCCCCGGG.  Find a mRNA codon chart and answer the following:
​
1.  Determine in sequence the amino acids that are coded for by the mRNA molecule.
2.  Determine the DNA code sequence that produced the mRNA codons.
3.  What would the amino acid sequence be if the first cytosine of the mRNA molecule was replaced by uracil?  **This would be the result of a change occurring in the DNA molecule that transcribed the mRNA**

Homework:  This is an online quiz.  You cannot take it until you have completed Missions 1 & 2.  There are some questions being asked that only HL will need to know, but for the other 20 or so questions, the material is covered by Missions 1 & 2.