Agenda:
1.  Work through each mission.
2.  Complete the interactives and simulations.

Student Missions:
Mission 1: EAT ME!!!
Mission Objectives.  You should be able to...
1. List and describe the major organs of the digestive system and their functions.
2. Trace the path of food through the digestive system.
3. Name the enzymes that digest carbs, proteins and fats.
4. Explain how nutrients are absorbed into the bloodstream.
​
​The alimentary canal is the entirety of the digestive system.  It begins at the mouth and ends at the anus.  Major organs of the alimentary canal are: mouth, pharynx, esophagus, stomach, small intestine, large intestine, and colon.  The canal wall contains mucosa, submucosa, smooth muscle and serosa.  The canal has both mixing movements and propelling movements.

Learn about the major organs here.

The digestive system is responsible for turning the food we eat into nutrients we can use.  The process has four steps: ingestion, digestion, absorption and transport. Ingestion is the act of eating.  Digestion begins in the mouth, when food is chewed and starting to be broken down with the help of saliva.  Absorption occurs when the digested molecules are absorbed through cells.  Transport is when the blood delivers the nutrients to body cells. 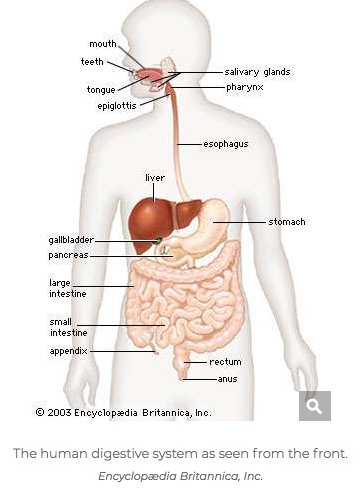 Get familiar with the organs.  Download this labelling handout.

Food must be broken down into macromolecules (proteins, carbohydrates, nucleic acids and lipids) before it can be absorbed by the body.  The molecules must be able to pass through the cell membranes in the intestines and then capillaries.  So food must be chemically digested to the right size for this to take place.

Digestive enzymes add to food as it moves through the alimentary canal.  Enzymes are specific to macromolecules (example: lipase, which breaks down lipids; amylase, which breaks down amylose [or starch], and pepsin [protease], which breaks down proteins).  Enzymes lower activation energy, which means less energy is required for the biochemical reactions to take place. The energy is usually in the form of heat.  Our body temperature is ideal for metabolic reactions to occur.
Smooth muscle keeps food moving forward.  Smooth muscle contractions are controlled by the autonomic nervous system.  These contractions are called peristalsis.  Peristalsis begins when you swallow and the semi-digested food moves down the esophagus.  In the stomach, peristalsis mixes food with digestive secretions including protein-digesting enzymes.  This process is called churning.  Peristalsis is fast in the esophagus but slow in the intestines.  Why do you think this is?

The inner lining of the small intestine (SI) is called mucosa.  Mucosa contains small fingerlike folds called villi.  Villi, in turn, contain tiny folds called microvilli.  This increases the surface area of the small intestine.  Increased surface area leads to more and faster absorption.  The role of the villi and microvilli is to selectively absorb molecules found in the lumen (cavity) of the SI.  Eventually, most monomers are absorbed into the inner capillary bed and transported via blood to cells.

Let's watch this awesome interactive.  Cool digestive interactive can be found here. Check it out, take the quiz.

Here's an interactive jigsaw puzzle over the digestive system.

Homework:   Do a step-by-step list of how food moves through the gut.
​
Mission 2: Blood Laundromat
Mission Objectives.  You should be able to...
1. List and describe the major organs of the excretory system and their functions.
2. Identify the major wastes produced by the human body and describe how they are eliminated.
3.  Draw and annotate a nephron.
4.  Explain how urine is formed.
5.  Trace the flow of urine through the urinary tract.

This PowerPoint provides a detailed overview of the excretory system.

Learn about the major organs of the excretory system here.

Excretion is the process by which waste and excess substances are removed from the body.  The liver removes harmful substances from the blood such as bacteria, certain drugs, and hormones.  The liver breaks down excess amino acids to form urea.  Kidneys filter urea from the blood to make urine.  Urine passes through the ureter from each kidney to the bladder, where it's stored until it's time to evacuate.  The urethra carries urine from the bladder to the outside.  The large intestine removes solid waste from the body after food has been digested and nutrients absorbed.

Lungs rid the body of carbon dioxide and water vapor.  Skin removes excess heat via sweat, which evaporates and cools the body.  Sweat is made up of 98% water and 2% salt. 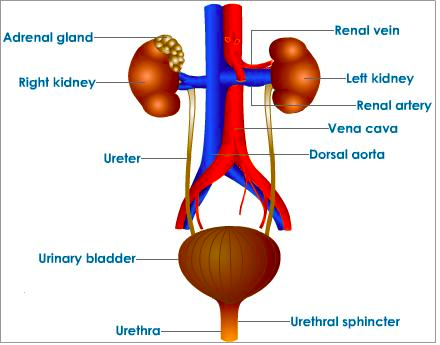 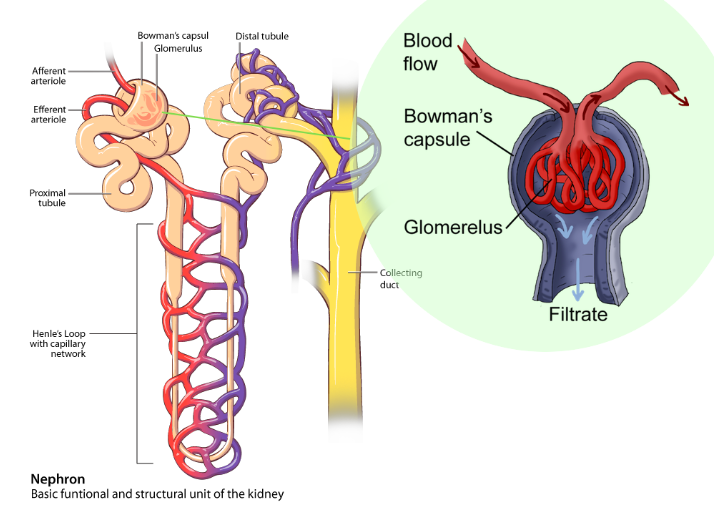 Above is a diagram of a nephron.  Nephrons are the basic structural unit of the kidney.  Its function is to regulate the concentration of water and soluble substances by filtering the blood, reabsorbing what's needed and excreting the rest as urine.
Now let's see what you've learned with this Build-A-Body interactive.
​
Homework:  Sketch a nephron and annotate it.  Trace the movement of urine through the excretory system.

​Mission 3: Being Hormonal
Mission Objectives.  You should be able to...
1. Describe advantages that hormones have over the electrical signals sent through nerves.
2. Compare and contrast hormones with non-endocrine chemical signals.
3. Explain how the hypothalamus regulates the activities of hormones.
4.  State the difference between peptide hormones and steroid hormones. 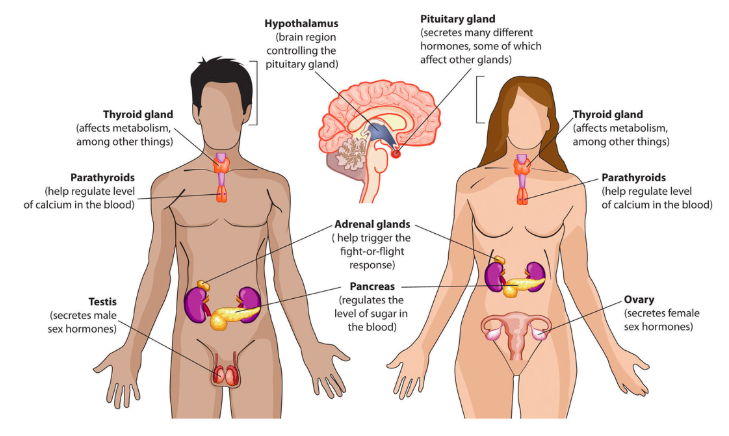 The hypothalamus is a tiny organ located above the brainstem.  It is responsible for maintaining homeostasis via production of hormones.  Hormones are chemical substances  that control different cells and organs.  Temperature regulation, thirst, hunger, mood and sleep cycle are regulated by hormones released by the hypothalamus.

Hormones are slow acting, but their effects last for a long time.  They have advantages over the electrical signals transmitted by nerves.  (1) Scope: Hormones can spread to all cells via blood, whereas electrical signals have to reach all the cells involved.  (2) Specificity:  Hormones are sent to specific places.  They have a particular shape that matches a particular receptor on a target cell.  (3)  Flexibility: The same hormone can be used by the body to achieve different effects in different tissues.
The body also uses non-endocrine chemical signals to regulate cell activity.  They affect cells in a way similar to hormones, but are not called hormones because they act over short distances.  Examples include neurotransmitters, neuropeptides, and prostaglandins.  Be sure you know what each of these terms mean.  See page 970 in your text.