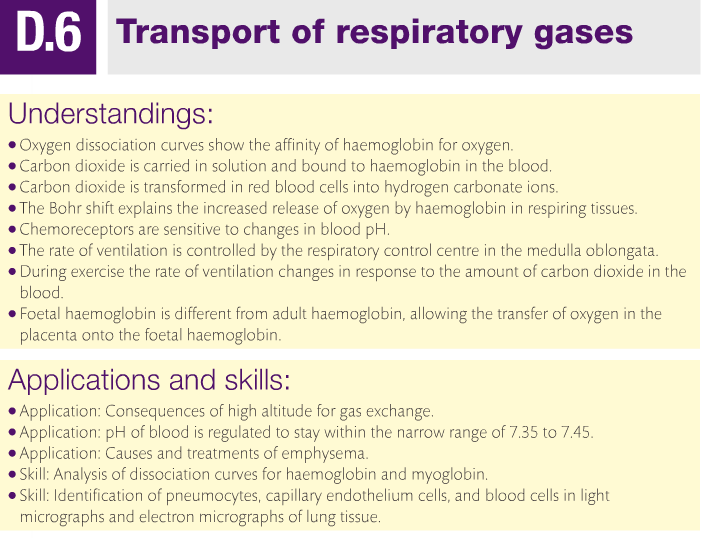 Mission 1: Oxygen Disassociation Curves
Mission Objectives.  You should be able to...
1.  Describe oxygen disassociation curves under different conditions.
2.  Explain how the structure of hemoglobin relates to its ability to attract oxygen molecules.

Hemoglobin is an oxygen transport protein in the blood.  Hemoglobin contains four polypeptide chains, each with an iron-containing heme group that binds oxygen.  Each hemoglobin molecule can bind up to four oxygen molecules.  As each oxygen molecule binds, it alters the conformation of hemoglobin, making subsequent binding easier (Bioninja). 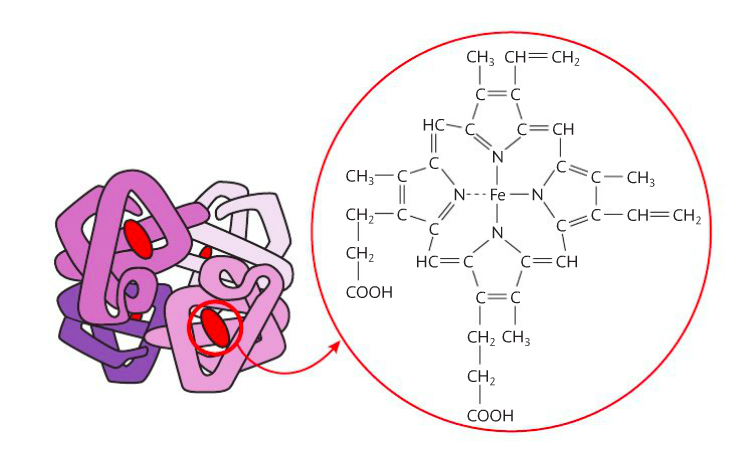 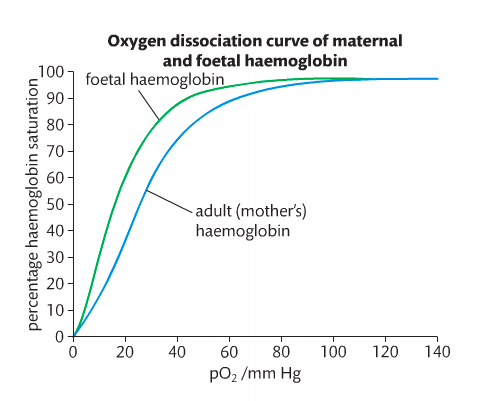 Myoglobin is a specialized oxygen transport protein in muscles.  It has a much higher affinity for oxygen and will only release its oxygen when the pO2 is low, for example in the muscles during heavy exercise.  The shapes of the two curves are different because hemoglobin has four chains with with four heme groups whereas myoglobin has one.  The release of each oxygen from hemoglobin triggers a conformational change to more rapidly release subsequent O2 molecules.  The below image is from the Pearson (2014) text.  There is a similar figure on page 703 in the Oxford (2014) text. 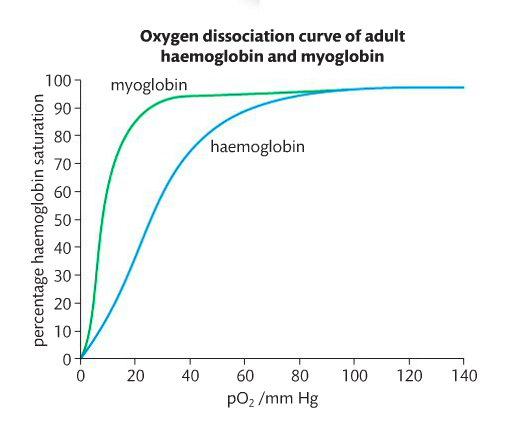 Mission 2:  Carbon Dioxide Transport
Mission Objectives.  You should be able to...
1.  Describe how carbon dioxide is transported in the blood.
2.  Explain the Bohr shift.
3.  Describe the causes and treatment of emphysema.

Carbon dioxide is transported in three forms in blood plasma: (1) dissolved as CO2, (2) reversibly converted to bicarbonate ions (HCO3-) that are dissolved in plasma, and (3) bound to plasma proteins.  The table on page 700 in the Oxford (2014) shows the amounts of each form in arterial blood and in venous blood at rest and during exercise (Oxford 2014).

The majority of CO2 produced by the body during cellular respiration is converted to the more soluble and less toxic bicarbonate ion.  The reaction occurs inside red blood cells and is catalyzed by an enzyme (carbonic anhydrase).  The reaction is reversible.  See the below left image.  In the tissues where CO2 is generated, the reaction proceeds to the right; more bicarbonate and hydrogen ions are formed.  This lowers the pH of the blood.  In the lungs, when CO2 leaves the blood, the reaction favors the left side and the bicarbonate ion is converted to CO2 (Oxford 2014).
From BioNinja. 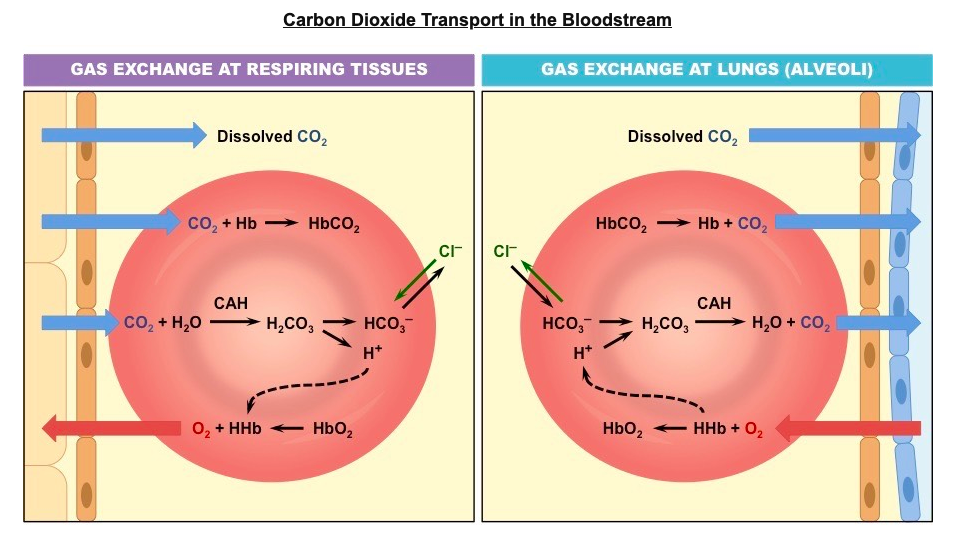 The Bohr Shift.  Increased metabolism results in the greater release of CO2 into the blood, which lowers the blood pH (becomes more acidic).  The increased acidity shifts the oxygen disassociation curve to the right, which results in a decreased affinity of the hemoglobin fo oxygen; that is, a greater release of O2 from hemoglobin at the same partial pressure of O2.  Examine Figure 2 on page 701 in the Oxford (2014) text.  This is known as the Bohr Shift.  This ensures that respiring tissues have enough O2 when their need for O2 is the greatest.  Also, in the lungs, pCO2 is lower, so saturation of hemoglobin can occur at lower partial pressures of O2 (Oxford 2014).

This video simplifies the concept.  Make sure you understand what happens to the blood when it becomes too acidic.
Watch the below video for the causes and treatment of emphysema.
Proudly powered by Weebly