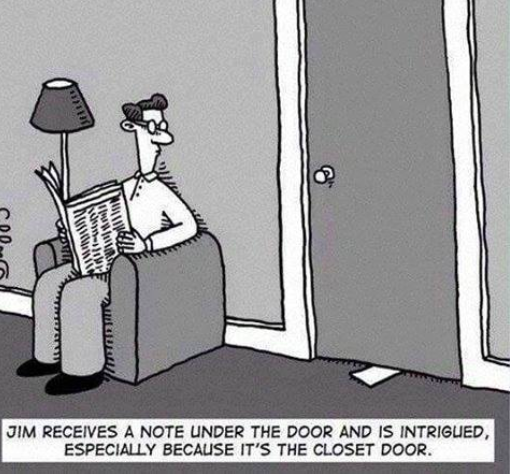 VSEPR stands for Valence Shell Electron Pair Repulsion.  This theory helps us to predict the shape of molecules using their valence electrons.  There are six steps to drawing Lewis structures using the VSEPR theory.   Mr. Anderson walks you through the process.  We will work some practice problems in class.
Mission 2:  Keeping Things Straight.
Mission Objectives.  You should be able to...
1. Identify and sketch the shapes and bond angles of different covalent compounds.
​
Remember that the book (and therefore the exams) will refer to shared pairs of electrons as electron domains.  Here is what we know so far:

Molecules (or species) with two electron domains tend to be linear with bond angles of 180 degrees.

Species with four electron domains tend to be tetrahedral and have bond angles of 109.5 degrees.

Pages 108-109 provide excellent summary tables of these shapes.
Mission 3:  Resonance.
Mission Objectives.  You should be able to...
​1.  Draw and describe resonance structures of different compounds, such as benzene, carbonate, and ozone.
2.  Explain the properties of giant covalent compounds in terms of their structures.
​3.  Define and explain coordinate covalent bonding.
​
Delocalization is when bonding electrons are not restricted to specific positions in molecules.  They can spread out and give greater stability to thee molecule or ion.  This happens frequently in molecules when there is more than one possible position for a double bond within a molecule.  Example: Ozone.  See below.
​
As a result, molecules like these demonstrate resonance.  The Lewis structures are called resonance structures, as there are multiple versions of where the delocalized electrons can be.  Look at the benzene example below.  This is a specific example you are expected to know.  You can look up carbonate on your own.

Resonance gives special properties to the structures where it occurs.  It affects bond lengths and strengths, which influence reactivity.  Acid and base strengths can be explained by resonance.

Play with this simulation. 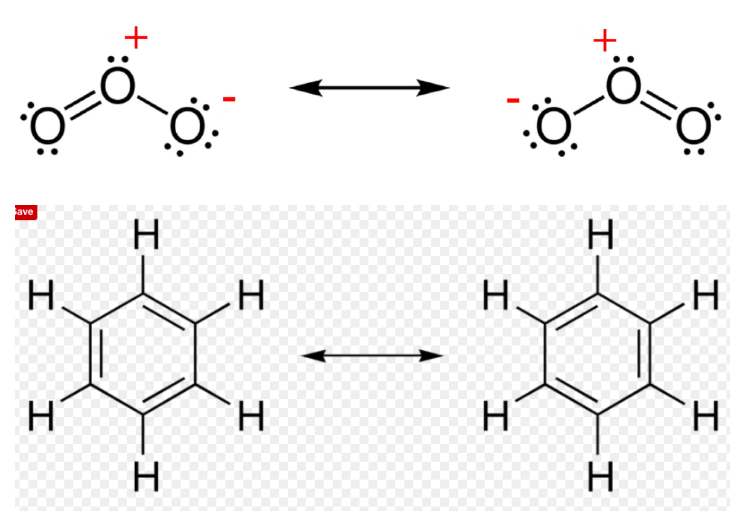 Carbon has four allotropes: graphite, diamond, graphene and buckminsterfullerene.  An allotrope is a structural modification of the same element.  Each of the four examples contain nothing but carbon bonded in different ways.  Graphite, diamond, and graphene are covalent network solids, in which the atoms are held together in a giant 3D lattice structure.  Quartz is another example (SiO2).  By contrast, buckminsterfullerene is molecular.

Read up on graphite, diamond, graphene, buckminsterfullerene and quartz.  This is covered in pages 117-120.  You're expected to know the properties of covalent network solids and details about each allotrope of carbon and silicon dioxide.

Dispersion forces (aka London forces):  These are weak forces of attraction that occur between opposite ends of two temporary dipoles, usually with nonpolar molecules.  A dipole occurs when the density of an electron cloud at any one moment be greater in one region of a molecule or atom.  These dipoles are called temporary or instantaneous because they do not last long.  When temporary dipoles influence the electron behavior of a nearby atom or molecule, induced dipoles result.

Polarizability is the ease of distortion of the electron cloud.  Remember, most molecules that are asymmetric are polar.  This means that they have a clear negative and positive end.

Hydrogen bonding:  When a molecule contains hydrogen covalently bonded to a very electronegative atom (fluorine, oxygen, or nitrogen), these molecules are attracted to each other by a particularly strong force called a hydrogen bond.  These are specific instances of dipole-dipole attraction.  The large electronegativity difference results in the electron pair being pulled away from hydrogen.  It now exerts a strong attractive force on a lone pair of electrons in a nearby molecule.

Hydrogen bonds are the strongest intermolecular force.  As a result, they cause the boiling points of substances to be higher than normal. 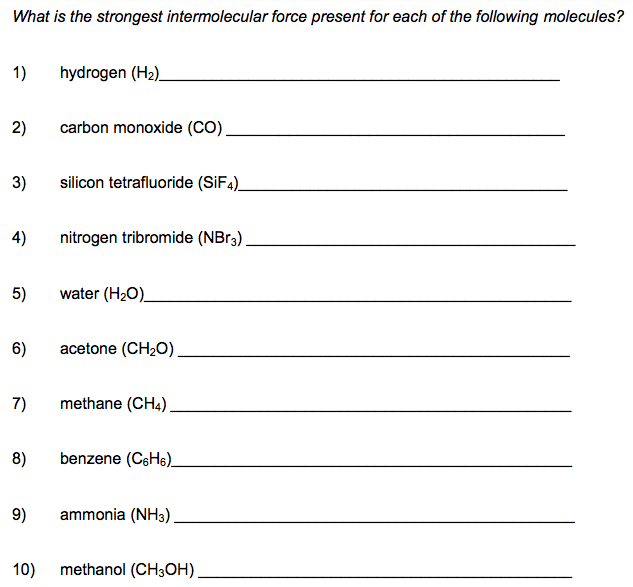 Mission 5: Metallic Hook-Ups
Mission Objectives.  You should be able to...
1. Explain the electrical conductivity and malleability in metals.
2. Explain the trends in melting points of metals.
3. Explain the properties of alloys in terms of non-directional bonding.
​
Metallic bonding is the electrostatic attraction between a lattice of cations and delocalized electrons.  Remember that delocalized electrons are not tied to a nucleus and free to move throughout the structure.

The strength of a metallic bond depends on three things: (1) number of valence electrons that can be delocalized, (2) charge of the metal ion, and (3) ionic radius of the metal cation.
Metals are good conductors of electricity because of the delocalized electrons. Charged species have to be free to move in order to conduct electricity.  Metals are malleable, which means they can be hammered into shapes without breaking.  Malleability is the result of cations sliding past each other, which leads to a rearrangement of the shape of the solid.  The metallic bonds within the lattice structure do not have a defined direction; therefore, they are non-directional.

Melting points of metals depend on the strength of the attractive forces that hold the cations within the sea of delocalized electrons.  The melting point of calcium is higher than potassium for the following reasons:

**Calcium forms a 2+ cation and potassium forms a 1+.  Therefore the electrostatic attraction between the positive ions and delocalized electrons is greater in calcium.

***Calcium has a smaller ionic radius that potassium.  This implies that the delocalized electrons will be more strongly attracted to the Ca2+ ion.

Alloys, which are metallic solutions, can have a number of improved properties compared to their parent metallic element: increased strength, resistance to corrosion, enhanced magnetic properties, and greater ductility (ability to be drawn into wire).  Adding additional atoms to the lattice reduces the ability of the cations to slide past each other and makes the metal stronger. 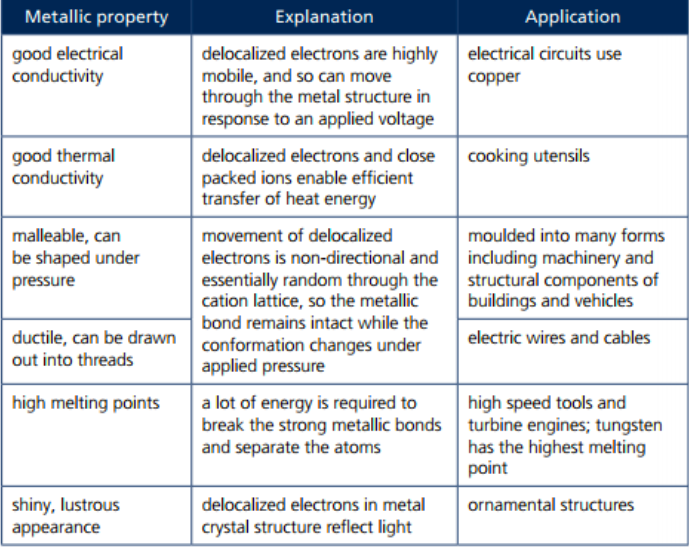 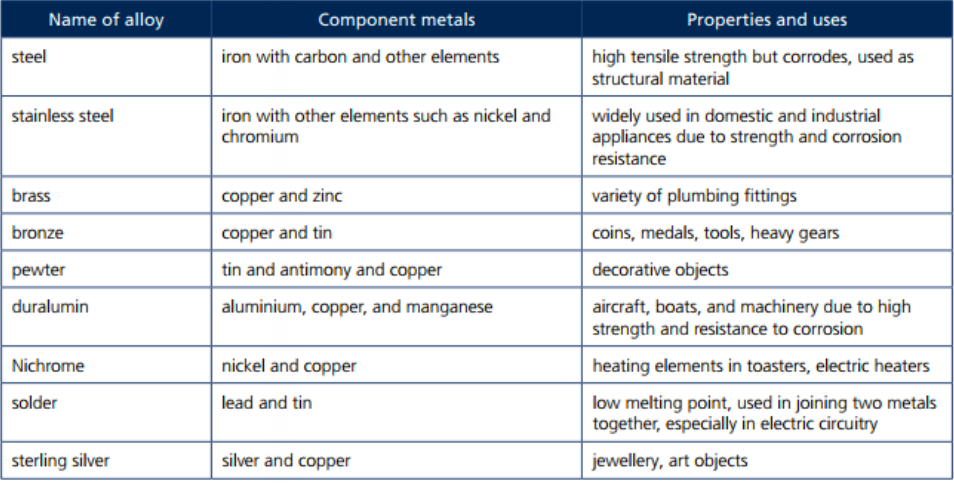