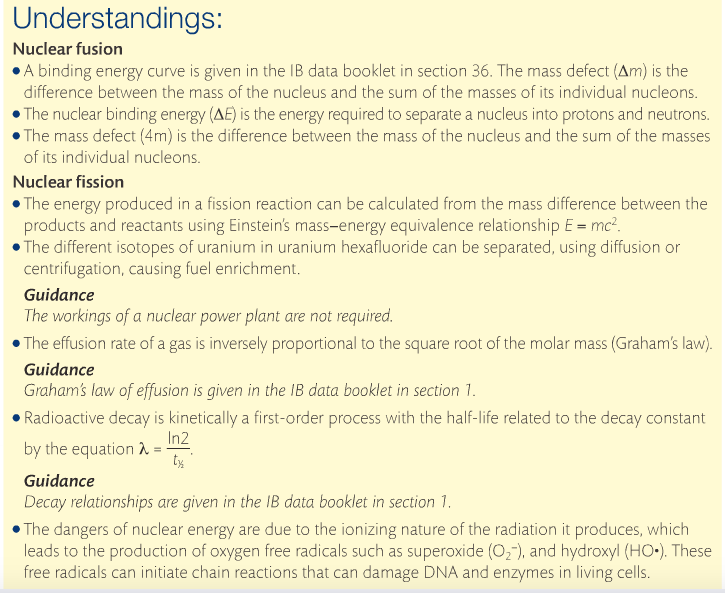 Nuclear energy allows humans to obtain large quantities of energy from small quantities of matter.  The energy produced from a chemical reaction can be calculated from the mass difference between the products and reactants using E = mc2.  The mass defect is the difference between the mass of the nucleus and the sum of the masses of its nucleons and its relationship to the nuclear binding energy.  The nuclear binding energy (delta E) is the energy required to separate a nucleus into protons and neutrons (Oxford 2014).

When a nucleus contains too many or too few neutrons, it is radioactive.  In order to achieve stability, the nucleus emits radiation.  The major forms are alpha (a helium nucleus), beta (an electron), and gamma.  See below, from the Pearson text. 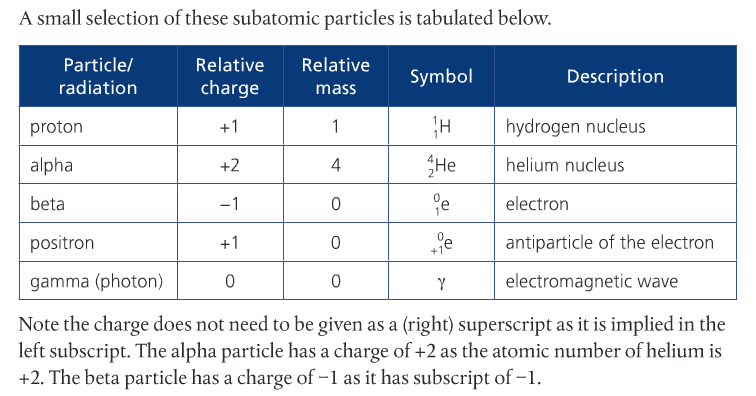 For a fissile material to sustain a chain reaction, there must be enough fissionable material to allow the neutron released in one fission process to have a good chance of finding another fissile nuclei before escaping from the bulk material. Critical mass is defined as the minimum mass of a fissionable material needed to sustain a chain reaction (Pearson 2014).  The exact value depends on the exact nature of the fuel being used and the shape of the assembly.  Naturally occurring uranium contains less than 1% of U-235, so enriched uranium fuel is needed to sustain the reaction.  Enrichment is the process by which the percent composition of U-235 is increased to make nuclear fission more likely (Pearson 2014).  To do this, the U-235 isotope must be separated from the U-238 isotope.  Pages 704-705 in the Oxford text goes into detail how this is done.

Fuel enrichment involves the separation of different isotopes of uranium.  Gaseous uranium hexafluoride (UF6) is forced through a semipermeable membrane.  Molecules containing the different isotopes of uranium will move at different average speeds.  This produces a slight separation between molecules containing U-235 and U-238.  UF6 is the only compound sufficiently volatile enough to be used in the gaseous diffusion process.  It sublimes if heated to 56.5 degrees C. 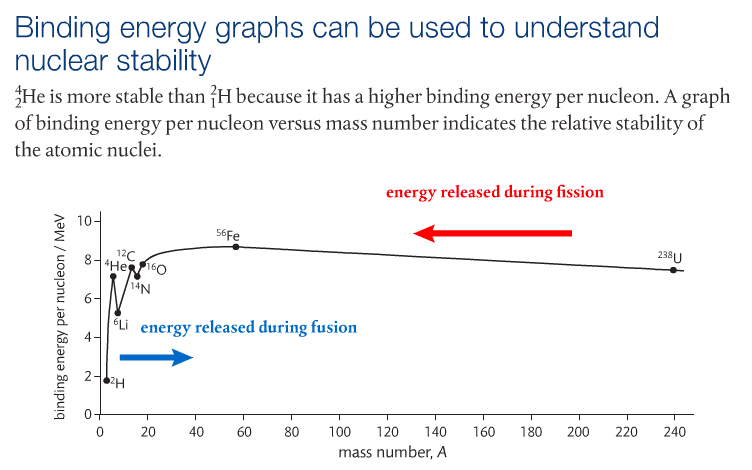 The curve in the binding energy graph indicates that the binding energy per nucleon tends to increase sharply to a peak at Fe-56, which corresponds to the most stable isotope and then diminishes.  As binding energy is the energy that is released when nuclei are formed, it is important to know that Fe-56 is the most stable nuclei because it has the least energy (Pearson 2014).  Nuclear fusion, which is the fusing of very light nuclei, can occur for isotopes found to the LEFT of the Fe-56 nuclei on the graph.  Nuclear fission, which is the splitting of heavy nuclei, occurs to the RIGHT of the Fe-56 nuclei (Pearson 2014).
Radioactive decay is a first order process.  The time it takes for half a sample to decay is called half-life.  The decay constant is related to the half-life (see page 706).  This is the time taken for (1) half the mass of an isotope to decay, (2) the concentration of an aqueous isotope to fall to half its initial value, (3) the number of atoms of the isotope to fall to half their original number, and (4) the activity of an isotope to fall to half its initial value (Pearson 2014).

Below is a decay curve from the Pearson text. 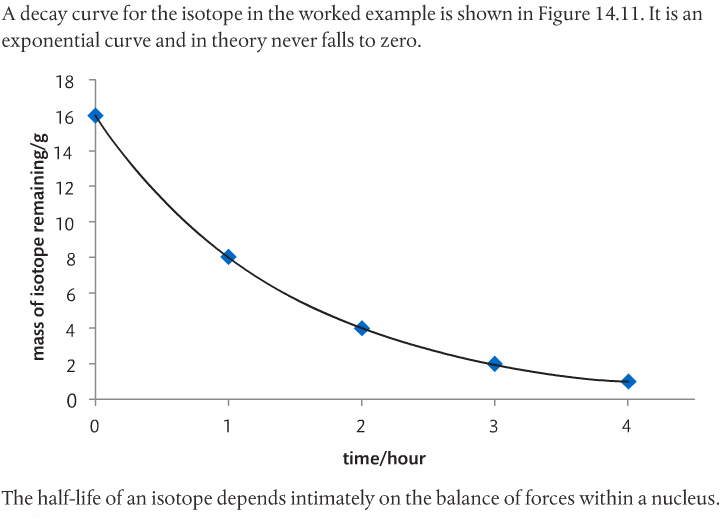