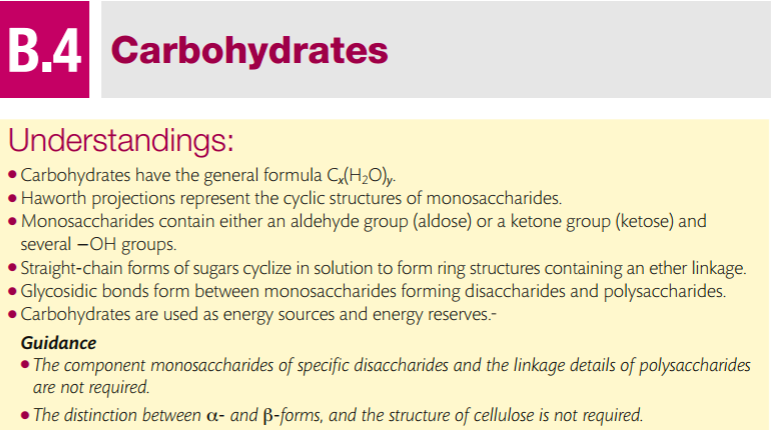 Carbohydrates (hydrated carbon) are composed of the elements C, H & O and the ratio of hydrogen and oxygen always in the same ratio as in water (2:1).  They can be expressed in the general formula Cx(H2O)y.  This higher ratio of oxygen represents a more oxidized state for the carbon atoms than in lipids.  There are two kinds of carbohydrates: monosaccharides (simple sugars; ex: glucose and fructose) and polysaccharides (condensation polymers of monosaccharides).  Monosaccharides are soluble in water and are used as the main substrate for respiration, releasing energy for all cell processes.  They also act as precursors in a large number of metabolic reactions, leading to the synthesis of other molecules such as fats, nucleic acids and amino acids (Pearson, 2014).

Polysaccharides are insoluble and are used as the storage form of carbohydrates.  Animals mostly use glycogen for storage of carbs in the liver and muscles, while plants store starch in their cells.  These energy reserves can be broken down into monosaccharides, which are then oxidized in respiration to release energy for the cell's activities.  Plant cells are dependent on carbohydrates for their structure.  The polysaccharide cellulose is found in the walls of all plant cells (Pearson, 2014).


Image below from researchgate.net 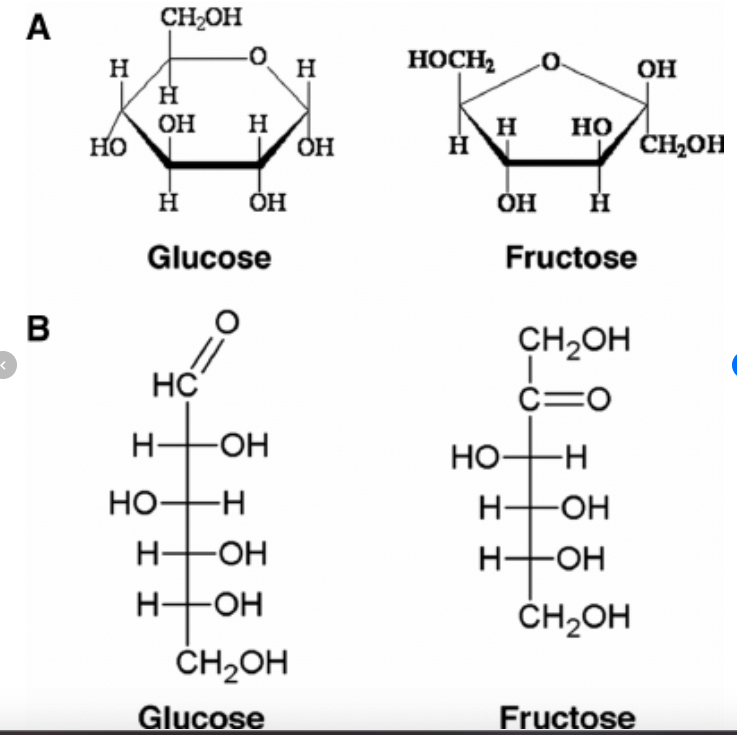 Monosaccharides are the simplest form of carbs and are classified according to the number of carbon atoms that they contain.  Common monosaccharides include triose sugars (C3), pentose sugars (C5), and hexose sugars (C6).  Monosaccharides can be represented by the empirical formula CH2O.  Hexose sugars, for example, have the same molecular formula of C6H12O6.  These sugar molecules all have two or more hydroxyl groups (-OH) and a carbonyl group (-C=O).  The large number of polar hydroxyl groups is responsible for their ability to be soluble in water.  Many isomers of sugars exist, representing different structural arrangements of the same number and type of atoms in different molecules (Pearson, 2014).  Above is an image of the structures of glucose and fructose, both monosaccharides, in their straight-chain forms and their ring forms. Notice the subtle difference between the two in the location of the C=O bond.  The representation of the ring forms of sugars are called Haworth projection formulas.
Disaccharides are formed from the linkage of two monosaccharides in a condensation reaction.  A water molecule is eliminated as an -OH group from each sugar react together.  The resulting bond between the monosaccharides is known as a glycosidic link.  Disaccharides are all soluble molecules that can be hydrolyzed into two monosaccharides by acid hydrolysis or by enzyme-catalyzed reactions.  Two glucose molecules condense to form maltose (first image below).  Glucose and fructose condense to form sucrose (Pearson, 2014).

First image from wikimedia commons.  Second image from wikipedia.
Polysaccharides are sugar polymers.  They are formed by repetitions of disaccharide condensation reactions, leading to a long chain or monosaccharide units held together by glycosidic bonds.  Due to their large size, polysaccharides are insoluble and make an ideal storage form of the energy-rich carbohydrates.  Cellulose found in plants form a rigid structure that support plant cells.  Common polysaccharides: starch (carb storage in plants), cellulose (structural material in plants), and glycogen (carb storage in animals).  They're all polymers of glucose, but differ from each other in the isomer of glucose used and in the amount of cross-linkage in the chain.  Starch, seen below, consists mostly of a straight-chain polymer of alpha glucose with 1-4 linkages (carbon locations) (Pearson, 2014).