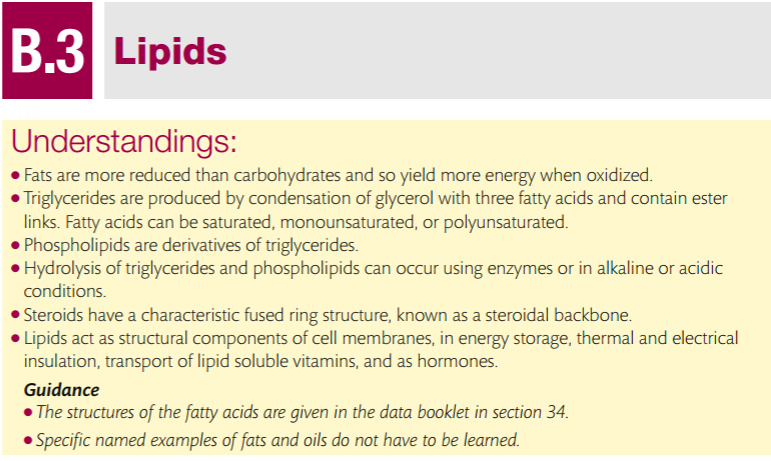 Mission 1: Phat Is Where It's At!!!
Mission Objectives.  You should be able to...
1.  Deduce the structural formulas of reactants and products in condensation and hydrolysis reactions between glycerol and fatty acids and/or phosphate.
2.  Predict the relative melting points of fats and oils from their structures.
3.  Compare the processes of hydrolytic and oxidative rancidity in fats with respect to the site of reactivity in the molecules and the conditions that favor the reaction.
4.  Apply the concept of iodine number to determine the unsaturation of a fat.
5.  Compare carbohydrates and lipids as energy storage molecules with respect to their solubility and energy density.
6.  Research and discuss the impact of lipids on health, including the roles of HDL and LDL cholesterol, saturated, unsaturated, and trans fats and the use and abuse of steroids.

The term lipid is an umbrella term for a range of biomolecules such as fats, oils, steroids, and phospholipids.  They are characterized as hydrophobic and insoluble in water.  They are soluble in non-polar solvents and this property is often used in extracting them from cells.  Lipids contain the elements CHO, but the H:O ratio is greater than in carbohydrates. This means that lipids are more reduced molecules (Pearson, 2014).
Lipids​ contain stored energy that is released when they are broken down in the reactions of cellular respiration.  Because lipids are more reduced than carbohydrates, they can undergo more oxidation and thus, release more energy per unit mass when used as a respiratory substrate.  There is a significant difference: a gram of lipid releases almost twice as much energy as a gram of carbohydrate.  However, due to their insolubility, the energy in lipids is not as readily available as it is in carbohydrates because more reactions are involved in their breakdown, and so the energy is released more slowly (Pearson, 2014).

Fat stores in animals is known as adipose tissue or blubber and serve as reservoirs of energy, swelling and shrinking as fat is deposited and withdrawn.  Plants can sometimes store lipids for energy.  Stored fat acts as a thermal insulator and can protect some body organs.  Lipids can also act as electrical insulators as well.  Neurons contain a special layer of fat called myelin sheath that allows for the increase of electrical signals.  Some hormones, such as estrogen and testosterone, are made of lipids in the form of steroids.  Lipids help to absorb fat-soluble vitamins such as A, D, E & K.  Phospholipids are a major component of membranes that bind cells.  They help determine the selective transport of metabolites across cell boundaries.  Cholesterol, another lipid, is important in plasma membrane structure.  It influences the fluidity and permeability of the membrane (Pearson, 2014).
Triglycerides are the major constituents of fats and oils.  They are esters formed by condensation reactions between glycerol and three fatty acids.  Fatty acids are long-chain carboxylic acids R-COOH.  Look up the structure of palmitic acid.  An esterification reaction takes place between a -COOH group and each -OH group in glycerol, eliminating water as each ester link forms.  So one glycerol condenses with three fatty acids to form a triglyceride (Pearson, 2014).  See below.
​
Image from www.researchgate.com 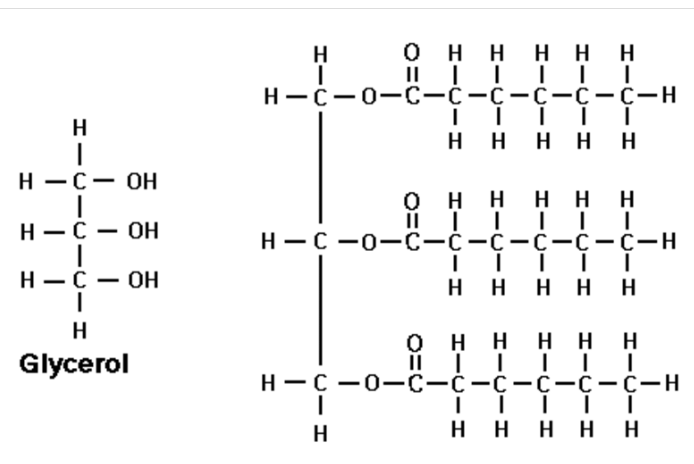 In most oils and fats, the three fatty acids that form one triglyceride are not all the same, so they have designations of R1, R2 and R3.  They differ in two ways, which gives rise to the specific properties of different fats and oils.

(1)  The length of the hydrocarbon chain; the most abundant fatty acids have an even number of carbon atoms with chains between 14 and 22 carbon atoms long.  (2) The number and position of the C=C bond in the hydrocarbon chain:
Saturated fatty acids have the general formula: Cn+H2n+1COOH.  The carbon chain is made up of nothing but C-C bonds that have tetrahedral bond angles (109.5) which allows the structure to pack close together.  This leads to significant dispersion forces between them, and as a result they form saturated triglycerides with high melting points and are solid at room temperature.  These are known as fats and are derived mostly from animals.  Examples: lard and butter (Pearson, 2014).

Unsaturated fatty acids contain at least one C=C bond with 120 bond angles have kinks in the chain which makes it difficult for the molecules to pack closely together.  They form unsaturated triglycerides that have weaker intermolecular forces and lower melting points and are liquid at room temperature.  These are known as oils and are found mostly in plants and fish.  Examples: corn oil and cod liver oil (Pearson, 2014).

Commonly occurring fats and oils consist of a mixture of triglycerides so they don't have sharp melting points.  Melting point tends to increase with increasing molar mass (length of the carbon chain) and with increasing degree of saturation (Pearson, 2014).  Compare the properties of linolenic, linoleic, oleic and stearic fatty acids.
To determine the degree of unsaturation in a fat, iodine is used.  Unsaturated fatty acids (UFAs) can undergo addition reactions by breaking the C=C and adding incoming groups to the new bonding locations on the C atoms.  This is a characteristic reaction for alkenes.  Iodine can react with UFAs like this.  One mole of iodine will react with each mole of double bonds in the fat.  Therefore, the higher the number of double bonds per molecule, the larger the amount of iodine that can react.  This is called the iodine number, which is defined as the number of grams of iodine which reacts with 100g of fat.  It is a measure of the amount of unsaturation in the fat.  The lower the iodine number, the higher the proportion of saturated fatty acids in the fat.  Saturated fats will have an iodine number of zero (Pearson, 2014).
Rancidity of Fats.  When fats used in the food industry are stored for long periods of time, they can undergo chemical changes which causes them to become rancid.  Effects of rancidity include bad smells, tastes, textures and/or appearance.  There are two causes of rancidity:

(1)  Hydrolytic rancidity.  This occurs when the fat breaks down by hydrolysis reactions, using the water present in food.  The site of reactivity is the ester linkages in the triglycerides.  The reaction occurs more readily in the presence of heat, such as during deep-fat frying.  It is also catalyzed by lipase and can be favored in the presence of certain bacteria.  Hydrolytic rancidity is favored by higher temperatures, so refrigeration can reduce the process (Pearson, 2014).

(2)  Oxidative rancidity.  This occurs when unsaturated fats react with oxygen from the air.  The site of reactivity is the C=C in unsaturated triglycerides.  The products responsible for the rancidity are volatile aldehydes and ketones.  This process is known as auto-oxidation and is often accelerated by light, enzymes and/or metal ions.  Oxidative rancidity is characteristic of fats and oils that have a high proportion of C=C.  It can be controlled by the addition of antioxidants (Pearson, 2014). 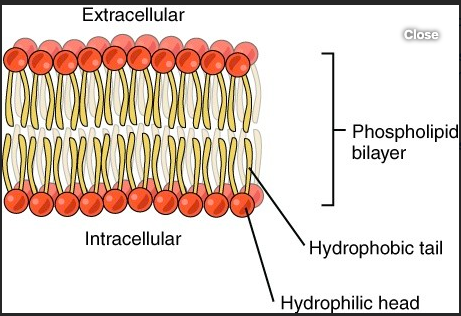