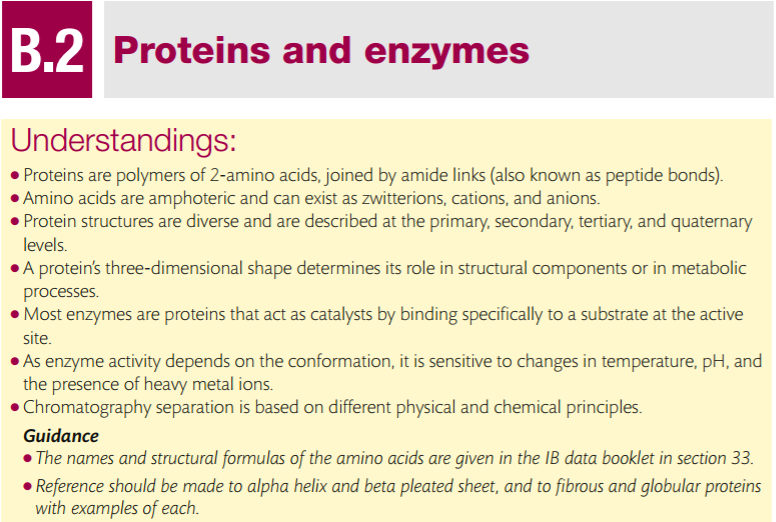 Mission 1:  Proteins. The Meat of it All.
Mission Objectives.  You should be able to...
1.  Explain how polypeptides are formed.
2.  Describe the different shapes proteins can form.
​3.  List five examples of proteins and their functions.
4.  Deduce the structural formula of reactants and products in condensation reactions of amino acids and hydrolysis reactions of peptides.
5.  Explain the solubilities and melting points of amino acids in terms of zwitterions.
6.  Explain the relationship between charge, pH and isoelectric point for amino acids and proteins.

Proteins are organic substances consisting of covalently bonded amino acids and they are ready to carry out their functions.  Polypeptides are single amino acid chains with their own primary structures.  If the polypeptide is able to carry out its function as is, then it is considered to be a protein.  In short, all proteins are polypeptides, but not all polypeptides are proteins.  There are two kinds of proteins: fibrous and globular.  Fibrous proteins are responsible for structure, support and movement.  Globular proteins drive metabolic reactions.  See the table below.

Each amino acid has a name and a three-letter code.  Amino acids are crystalline compounds with high melting points (200 C and up) and are more soluble in water than in non-polar solvents.  They move in an electric field.  AAs contain charged groups as a result of acid-base behavior.  In aqueous solutions and in crystalline form, AAs commonly exist with both positive and negative charges within the molecule, called zwitterions.  They are sometimes referred to as internal salts because the charges result from an internal acid-base reaction with the transfer of an H+ from the acidic -COOH group to the basic -NH2 group (Pearson, 2014).  Because amino acids contain both acidic and basic properties, they are amphoteric or amphiprotic.  In aqueous solutions, they will accept and donate H+ according to changes in pH of the medium (Pearson, 2014). 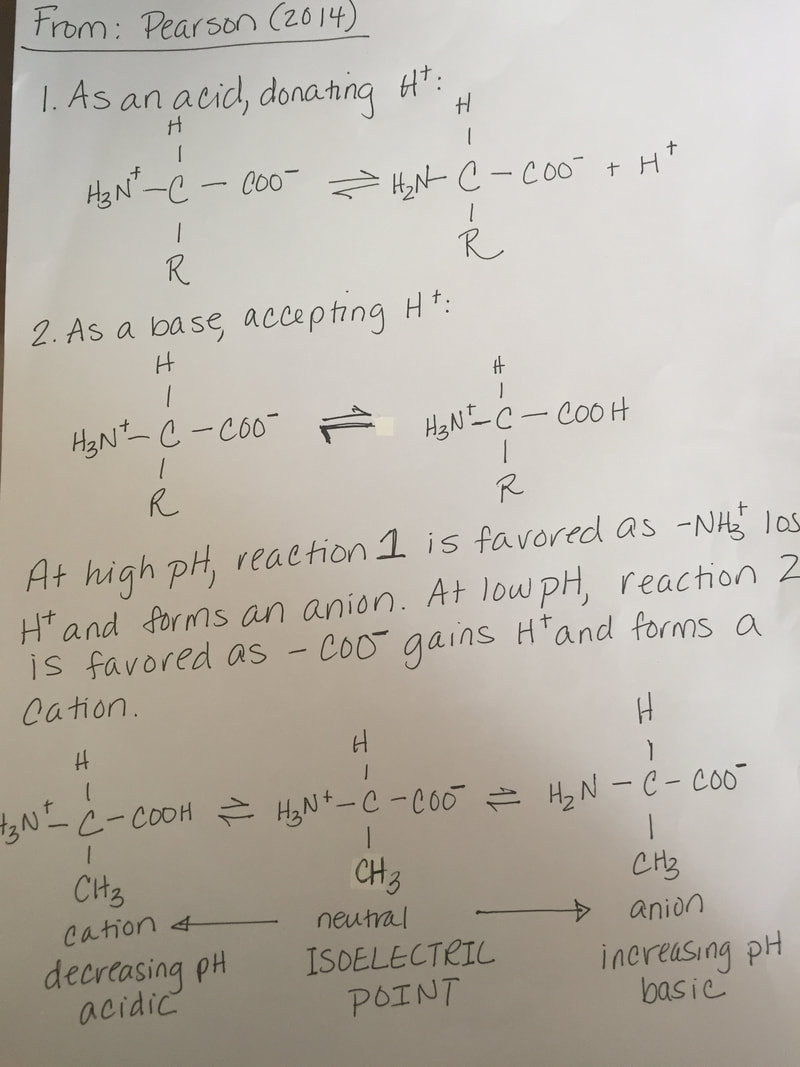 So amino acids tend to be positively charged at low pH and negatively charged at high pH.  The intermediate pH at which the amino acid is electrically neutral is called its isoelectric point.  With no net charge, amino acids will not move in an electric field.  Also at this point, the molecules will be the least soluble.  Section 33 in the Data Booklet gives the pH of each amino acid.

Amino acids linked together in different sequences make different peptides.  The sequence in which the AAs are linked are extremely significant as it will determine the exact nature of the polypeptide, and this is where the variety of protein structures come from.  Protein structures are typically formed from polypeptide chains that have at least 50 amino acids, so the number of possible structures becomes extremely enormous.  A polypeptide with 50 AAs has 20^50 possible sequences (Pearson, 2014)

The primary structure of a protein refers to the number and sequence of amino acids in its polypeptide chain.  Held together by peptide bonds, this forms the covalent backbone of the molecule.  Once the primary structure has been determined, all the other levels of protein structure follow.  Below is an example of a small polypeptide (Pearson, 2014).

Proteins have a variety of functions. As a result, they have many different forms and structures.  Function follows form, which means the function of any particular protein is closely related to its structure.  Protein structures are 3D; they can be folded, elongated, and helical.  When proteins are folded, hydrogen bonds stabilize the molecule.  There are four levels of protein structure:  primary, secondary, tertiary, and quaternary.

The secondary structure of proteins is regular hydrogen bonding.  It refers to the folding of polypeptide chain as a result of hydrogen bonding between peptide bonds along the length.  Hydrogen bonds can form between the -C=O group of one peptide bond and the -N-H group of another peptide bond further along the chain which will cause the chain to fold.  There are two types of secondary structures: alpha-helix and the beta-pleated sheet.  The alpha helix is a regular coiled configuration of the polypeptide chain resulting from hydrogen bonds forming between two peptide bonds for AA units apart.  This causes the chain to twist into a tightly coiled helix.  The alpha helix is flexible and elastic.  Examples of the alpha helix structure is found in keratin, the structural protein found in hair, skin and claws (Pearson, 2014).

Below are examples from BioNinja.

The tertiary structure refers to the further twisting, folding and coiling of the polypeptide chain as a result of interactions between the R-groups, known as side chains.  The structure that results is a very specific compact 3D structure known as the protein’s confirmation.  It is the most stable arrangement of the protein, taking into account all of the possible interactions along the entire length of the polypeptide.  This conformation is important in globular proteins, which include enzymes and protein hormones.  They are water-soluble because their structure positions nearly all of the polar (hydrophilic) side chains on the outer surface of the molecules where they can interact with water, and most of the non-polar (hydrophobic) side chains in the interior out of contact with water.  The interactions that stabilize this conformation are of the following types:

These interactions can be upset by changes in the medium such as to temperature, pH, or the presence of metal ions.  When a protein loses its specific tertiary structure as a result of such a disruption, it is said to be denatured.  Denaturation of enzymes renders them biologically inactive, which is one of the reasons why intracellular conditions must be tightly controlled. (Pearson, 2014)

The protein collagen, which is found in skin and tendons, and is actually the most abundant protein in the human body, is a triple helix of three polypeptide chains, with inter-chain hydrogen bonds between them.  This helps to give it a rope-like structure that is resistant to stretching.  Hemoglobin, responsible for carrying oxygen in the blood, is made up of four polypeptide chains that fit together tightly in the protein assembly.  Many proteins consist of only one polypeptide chain and so do not have a quaternary structure (Pearson, 2014).

Mission 2:  Enzymes.  All We Do is Catalyze!!
Mission Objectives.  You should be able to...
1.  Describe the purpose of an enzyme.
2.  Explain how an enzyme-substrate complex works.
3.  Compare and contrast competitive and non-competitive inhibition.
4.  Describe the effects of pH, temperature and heavy metal ions on the conformation of an enzyme.
5.  Interpret graphs of enzyme activity involving changes in substrate concentration, pH and temperature.
6.  Explain the process of paper chromatography and gel electrophoresis in amino acid and protein separation and identification.
Enzymes are biological catalysts that control every reaction in biochemistry.  They are specific for each reaction and can be individually controlled, they determine the cell’s reactivity at the molecular level.  They are globular proteins and exist in compact spherical shapes when in aqueous solutions.  Their tertiary structures give them specific 3D shapes, which is essential for enzyme activity (Pearson, 2014).

Enzymes are typically large molecules, containing several hundred amino acids, and some also have a quaternary structure.  An example of this would be that the enzymes involved in the first stage of respiration are dimeric proteins, meaning they contain two polypeptide chains.  In addition, some enzymes require non-protein molecules to be bound for activity.  These are known as co-factors and may be organic, when they are known as co-enzymes, or inorganic, such as metal ions (Pearson, 2014).

​Enzymes form a complex with the substrate.  Enzymes are catalysts and increase the rate of a chemical reaction without themselves undergoing permanent chemical change.  The reactant catalyzed by the enzyme is called a substrate.  The presence of the enzyme provides a reaction route of lower Ea and so enables the reaction to occur more quickly at the same temperature.

The action of the enzyme is due to its ability to form a temporary binding to the substrate where it is held by weak forces of attraction, forming an enzyme-substrate complex.  This binding occurs on a small region of the enzyme called the active site.  The substrate is smaller than the enzyme and is able to fit within it.  Formation of the complex depends on the compatibility between the substrate and the side chains of the amino acids at the active site.  This involves non-covalent interactions such as hydrophobic interactions, dipole-dipole attractions, hydrogen bonding and ionic attractions.  The binding in the complex puts a strain on the substrate and this facilitates bond breaking and bond making.  Once the substrate reacts, the product formed won’t fit into the active site and so it detaches.  The enzyme is then released unchanged and is able to catalyze further reactions (Pearson, 2014).

All enzymes show this saturation effect, but they vary widely with respect to the substrate concentration required to produce saturation.
Most enzymes in the human body have an optimum value close to 37 degrees C, which is body temperature.  The effect of temperature on enzymes and other proteins is one of the main reasons why controlling temperature is so important to many organisms, and why a change in the human core temperature of a couple of degrees C is usually fatal (Pearson 2014).
Heavy Metal Ion Effects.  Heavy metal ions such as lead, copper, mercury and silver are poisonous, primarily due to their effects on enzymes.  When these metals are present as positive ions, they react with sulfhydryl groups (-SH) in the side chains of cysteine residues in the protein, forming a covalent bond with the sulfur atom and displacing a hydrogen ion.  This disrupts the folding of the protein and may change the shape of the active site and its ability to bind the substrate.  This is a form of inhibition (Pearson, 2014). 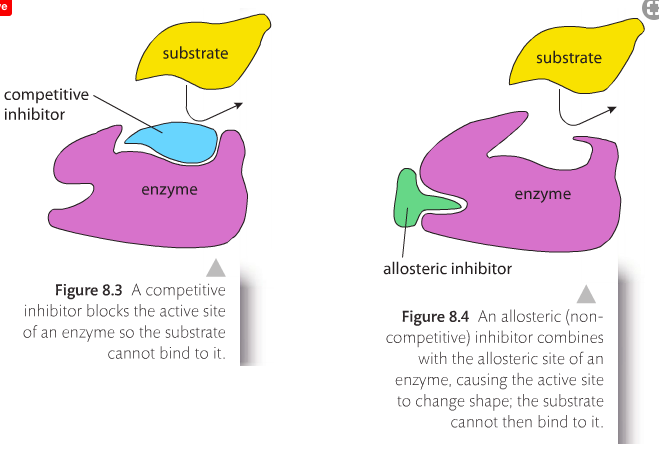 ​Protein Analysis.  Analysis of protein content is a major aspect of research in biochemistry.  Clinical analysis of protein levels in body fluids can be used to confirm pregnancy or can be used to help diagnose a variety of diseases.  Fppd analysts are interested in knowing the total concentration and types of proteins in foods, and the pharmaceutical industry uses altered protein levels to test the efficacy of a drug.  The IB asks that we focus on two approaches: chromatography and gel electrophoresis (Pearson, 2014).

Chromatography is a technique used for separating and identifying the components of a mixture.  The basic principle behind chromatography is that the components have different affinities for two phases: a stationary phase and a mobile phase, and so are separated as the mobile phase moves through the stationary phase (Pearson, 2014).
Gel Electrophoresis is a technique used for the analysis and separation of mixtures based on the movement of charged particles in an electric field.  Amino acids carry different charges based on their pH, and these differences can be exploited to separate them when placed in a buffer solution at a particular pH.   Things to note:  (a) When the pH is equal to their isoelectric point, amino acids will not move as they have no net charge, (b) when the pH > their isoelectric point, the amino acids exists as anions and move to the anode, and (c) when the pH < their isoelectric point, the amino acids exist as cations and move to the cathode (Pearson, 2014).
Practice problem:  Gel electrophoresis was carried out using a buffer at pH 6.0 on a mixture of glycine, alanine, lysine, glutamic acid and aspartic acid.  Use section 33 of the Data Booklet to identify which amino acids will remain close to the origin, which will move towards the cathode and which will move towards the anode.
Proudly powered by Weebly