B1: Introduction to Biochemistry

Mission 1: Metabolic Processes
Mission Objectives.  You should be able to...
1.  Explain the difference between condensation and hydrolysis reactions.
2.  Describe anabolic and catabolic processes and give examples.
3.  Explain the processes of photosynthesis and respiration.
4.  Interpret the photosynthesis and respiration equations in terms of explaining the balancing of oxygen and carbon dioxide in the atmosphere.

It is generally understood that life began in an aqueous environment and that the main event was the development of a membrane that enclosed and defined a volume of space known as a cell.  Within the cell, conditions such as pH, temperature and chemical concentrations can be controlled.  Inside a cell, there are thousands of chemical reactions occurring.  The sum of these reactions taking place is called metabolism (Pearson 2014).  Some features of metabolism are:

1.  Reactions are controlled in sequences and cycles known as metabolic pathways.  The product of each step is the reactant for the next step.  Compounds taking part in metabolism are known as metabolites.
2.  Every reaction is controlled by a specific enzyme.
3.  Similar pathways and enzymes exist in a wide range of different organisms.
4.  Reactions can be coupled so that energy from one reaction can be used to drive another.

Metabolism has two components: catabolism and anabolism.
Images from Pearson (2014).
Anabolic and catabolic processes take place simultaneously in a cell, but are separately controlled.  27 elements have been found to be essential components of living things and they are present in small amounts.  They are known as trace elements.  Molecules found in cells are mostly organic containing 96% by mass C, H, O and N.  S, P, Ca and Fe are also present (Pearson 2014).

Biomolecules have a diverse amount of structures due to the bonding abilities of carbon.  Many of them are macromolecules.  Macros consist of building blocks linked together by covalent bonds.  Most macros are polymers, so the building blocks are called monomers.  A recurring theme in biochemistry is the relationship between molecule structure and function.  Certain molecules are "built" for particular tasks in cells on the basis of their chemical nature and often, 3-D shape (Pearson 2014).

Photosynthesis occurs in two stages: the light-dependent and light-independent.  Light-dependent reactions (LDR) obviously involve the sun.  Light energy is converted into ATP and split water into hydrogen and oxygen (called photolysis).  The oxygen is released as a waste product (which we need to breathe).  So the products of L​DR are hydrogen and ATP.  Light-independent reactions (LIR) do not necessarily require sunlight in order to take place.  The ATP and hydrogen are used as forms of chemical energy to convert carbon dioxide and water into useful molecules for the plant.  It takes six carbon dioxide molecules to form one glucose molecule (Pearson 2014).

Photosynthesis is an anabolic process and an endothermic reaction (delta H is positive).
Respiration is the process by which energy is released in a controlled way inside cells.  Energy-rich molecules (glucose and oxygen) are broken down.  Like photosynthesis, respiration is essential to life.  It involves oxidation where the amount of energy released depends on the extent of oxidation achieved.  There are three stages in respiration: glycolysis, Krebs Cycle, and the electron transport chain.  Glycolysis is the only stage that does not require oxygen, and two molecules of ATP are released.  In the absence of oxygen (anaerobic respiration), this is the only energy that is released.  Products of anaerobic respiration are lactate and ethanol, which are energy-rich.  In the presence of oxygen, the oxidation of glucose is complete and much more energy is released (via the electron transport chain).  This is why most cells are dependent on a continuous supply of oxygen.  End products are the energy-poor carbon dioxide and water (Pearson 2014).

Respiration is a catabolic process and an exothermic reaction (delta H is negative). 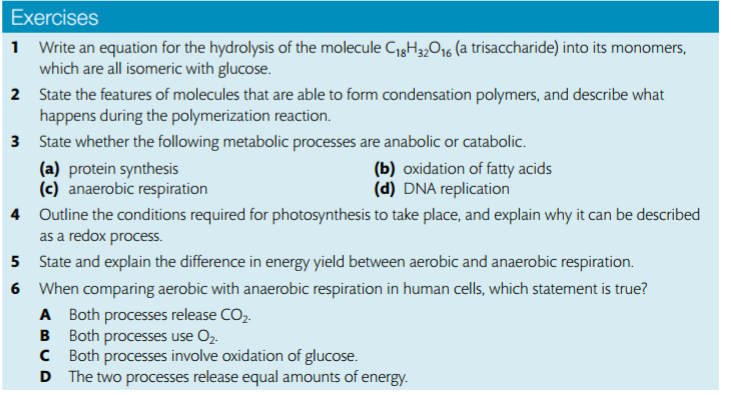