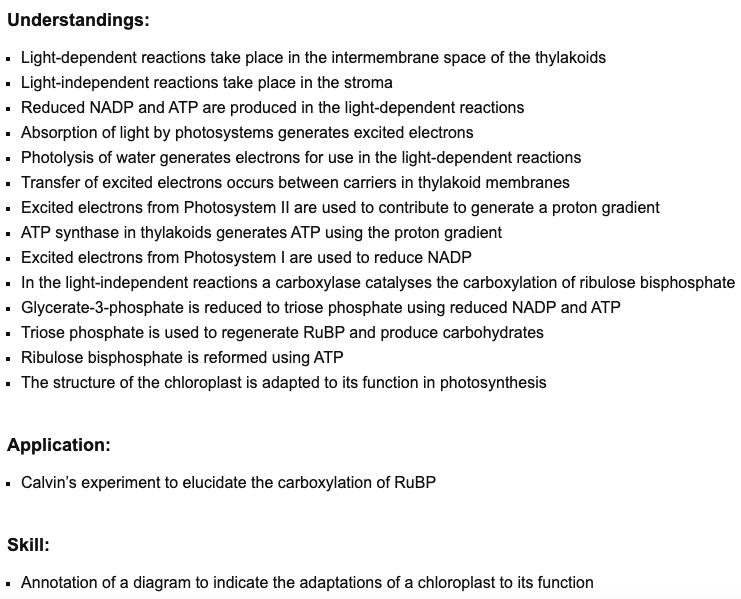 Mission 1:  Gang GREEN!
Mission Objectives.  You should be able to...
1.  Explain the process of photosynthesis in stages.
2.  Explain how the structure of a chloroplast is related to its function.
​
Recall that photosynthesis is the process by which plants convert carbon dioxide and water into glucose and oxygen. It is the reverse process of respiration that takes place in plant chloroplasts.  The pigment chlorophyll absorbs sunlight.

We can see a portion of the electromagnetic spectrum as visible light, and even though chlorophyll absorbs most of the light wavelengths except green, we will focus on the red end, the blue end, and the green middle.  When light energy is absorbed, it may be used.  When energy is reflected, we see it at a particular wavelength as color.  When all colors are reflected, we see white.  When all colors are absorbed, we see black.  So again, we see green because chlorophyll reflects it, but all other wavelengths are absorbed. Therefore, green light isn't used by plants.

​Images courtesy of fibercore.com and wikipedia.
Photosynthesis occurs in two main stages: the light-dependent and light-independent.  Light-dependent reactions (LDR) obviously involve sunlight.  Light energy is converted into ATP and split water into hydrogen and oxygen (called photolysis).  The oxygen is released as a waste product (which we need to breathe).  So the products of L​DR are hydrogen and ATP, which are used as forms of chemical energy.  Light-independent reactions (LIR) do not necessarily require sunlight in order to take place.  The ATP and hydrogen are used as forms of chemical energy to convert carbon dioxide and water into useful molecules for the plant.  It takes six carbon dioxide molecules to form one glucose molecule (Pearson, 2014).

Fixation is the process by which this happens.  Carbon dioxide and water are fixed into glucose and oxygen is produced as a waste product.  Fixation requires energy, which comes from the ATP and hydrogen created in the LDR, which came from sunlight.  The rate of photosynthesis is dependent upon environmental factors, such as intensity of light and air temperature.  During the daytime, the rate may be very high for a particular plant.  At night, the rate of photosynthesis may drop to zero.  Measuring the rate of oxygen production or carbon dioxide intake is an indicator of photosynthetic rate as long as a correction is made for cell respiration (Oxford, 2014).
Chlorophyll absorbs red and blue light and reflects green.  Light energy is used to produce a small amount of ATP, split water molecules (photolysis) and form oxygen and hydrogen.  The ATP and hydrogen (from photolysis) are used to fix carbon dioxide to make organic molecules.  ENDOTHERMIC REACTION.  The energy to do this comes from absorbing sunlight (Rott, 2020).

Limiting factors:  light intensity, temperature and CO2. A limiting factor is a reactant that is available in short supply.

Light Dependent Reactions.  Takes place in the thylakoid.  There are chlorophyll molecules grouped together called photosystem II.  Photosystem II absorbs photons of light from the sun and that energy bounces around the chlorophyll until it reaches a specific chlorophyll molecule.  The electrons become excited and get pushed to a higher energy level.  Then the electrons move through different enzymes in the membrane of the thylakoid.  This is the process of the ETC.  The electrons move through the ETC and through this process, produce ATP similar to what happens in respiration (Rott, 2020).

The electrons come from photolysis, which is the splitting of water to produce H+, O2 and electrons.  4e- get moved into photosystem II.  The H+ moves into the lumen of the thylakoid, and the oxygen is released as waste.  Water is necessary for providing H+ and electrons (Rott, 2020).

The electrons are moving through the enzymes until they get to the second photosystem (I) in the thylakoid membrane.  Additional light photons are absorbed, and the electrons get more excited and then move through a second ETC.  In this process, two NADPH will be produced (to be used in the Calvin cycle).

Summary of LDR:
Light Independent Reactions.  Sugar is produced here and CO2 is required.  The Calvin Cycle (CC) is the process by which the sugar is produced. There are 3 phases in the LIR: Carbon fixation, reduction and regeneration.

Carbon fixation: The chloroplasts take in 3 CO2 and these CO2s combine with RuBP (5C molecule) that has 2 phosphates attached to it.  When it combines with a CO2, it gets 6C with 2 phosphates.  It is a very unstable molecule, so it quickly splits into a 3C molecule with a single phosphate each.  At this point, there are 6 3C molecules (for a total of 18 carbons).  An ATP molecule for each of the 3-phosphoglycerates is used, and that phosphate is added to the 3C molecules and produces 1,3-biphosphoglycerate.  6 NADPH created in the LDR are used in order to convert the 1,3-biphosphoglycerate into glyceraldehyde-3-phosphate (G3P; this is what is produced when glucose splits during glycolysis) (composed of 3C and 1 phosphate) (Rott, 2020).  See below. 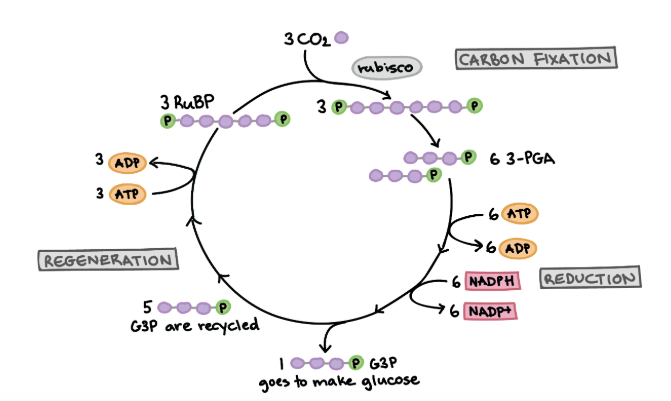 Reduction:  A phosphate group is released when the electrons were donated to 1,3-biphosphoglycerate. This is reduced in order to form the G3P molecules, and there are six of them.  Five G3Ps get recycled, and one gets released.  The one that is released has to wait around for the cycle to complete once more and produce another G3P molecule, and then when there are two G3Ps, they combine to form glucose (Rott, 2020).

Quick summary:  Phosphate is added to each 3C molecule from ATP.  A pair of electrons from NADPH reduce carbon molecule.  The carbon molecule loses a phosphate group and becomes G3P.  This is a 3C sugar.  One G3P exits cell for use and the remaining 5 get recycled.

Regeneration of RuBP (CO2 acceptor):  5 G3P molecules and 3 ATP are required to combine and rearrange the 5 G3Ps into 3 RuBP molecules with 2 phosphates each.  Then the RuBP is used by rubisco (enzyme that combines CO2 with RuBP) and starts the process all over again (Rott, 2020).

Net Reaction: 1 G3P sugar is produced and 9 ATP and 6 NADPH are consumed.

It takes six turns of the CC to produce one molecule of glucose.  Source
Photolysis.  Once the plastoquinone becomes reduced, the chlorophyll in the reaction center is then a powerful oxidizing agent and causes the water molecule nearest to it to split and give up electrons to replace the ones lost:

This is how oxygen is generated in photosynthesis, and is a waste product.  The useful product of photosystem II is the reduced plastoquinone which carries a pair of electrons and a lot of light energy.  This energy will drive all of the rest of the photosynthesis reactions (Oxford, 2014).

The Electron Transport Chain.  Transfer of excited electrons occur between carriers in thylakoid membranes.  The production of ATP, using energy derived from light is called photophosphorylation, carried out by the thylakoids.  The thylakoid membranes contain the following structures: photosystem II, ATP synthase, a chain of electron carriers, and photosystem I.  Reduced plastoquinone is needed to carry the pair of excited electrons from the reaction center of photosystem II.  Plastoquinone carries the electrons to the start of the chain of electron carriers (Oxford, 2014).

Electrons are used to generate a proton gradient.  Once plastoquinone transfers its electrons, they are then passed from carrier to carrier in the chain.  As the electrons pass, energy is released, which is used to pump protons across they thylakoid membrane, into the space inside the thylakoids.  A concentration gradient of protons develops across the thylakoid membrane, which is a store of potential energy.  Photolysis takes place inside the thylakoids and contributes to the proton gradient (Oxford 2014).
​
Image courtesy of Dirty Medicine. 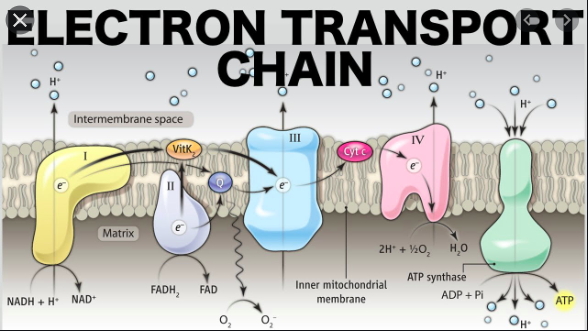 Chemiosmosis.  ATP synthase in thylakoids generate ATP using the proton gradient.  The protons can travel back across the membrane and down the gradient by passing through the enzyme ATP synthase (on the right).  The energy released by the passage of protons down their concentration gradient is used to turn ADP into ATP.  THis method of producing ATP is similar to the process that occurs inside a mitochondrion and is given the same name of chemiosmosis.  When the electrons reach the end of the chain of carriers, they are passed to plastocyanin which is a water-soluble electron acceptor in the fluid inside the thylakoids.  Reduced plastocyanin is needed in the next stage of photosynthesis (Oxford, 2014).
Reduction of NADP.  Excited electrons from photosystem II are used to reduced NADP.  The remaining parts of the LDR involve photosystem I.  The useful product of these reactions is reduced NADP, which is needed for the light independent reactions.  Reduced NADP has a similar role to reduced NAD in respiration: it carries a pair of electrons that can be used to carry out reduction reactions.  Chlorophyll molecules within photosystem I absorb sunlight and pass it to the special chlorophyll molecules (of which there are two) in the reaction center.  This raises an electron in one of the chlorophylls to a higher energy level (photoactivation).  The excited electrons passes along a chain of carriers in photosystem I, at the end of which it is passed to ferredoxin, a protein in the fluid outside of the thylakoid.  Two molecules of ferredoxin are then used to reduce NADP to form reduced NADP (Oxford, 2014).

The electron that photosystem donated to the electron carrier chain is replaced by an electron carried by plastocyanin. This is how photosystem I and II are linked: electrons excited in photosystem II are passed along the chain of carriers to plastocyanin, which transfers them to photosystem I.  The electrons are re-excited with light energy and are eventually used to reduce NADP (Oxford, 2014).
Carbon Fixation.  Carbon dioxide is the carbon source for all organisms that carry out photosynthesis.  The carbon fixation reaction in which it is converted to another carbon compound is one of the most important in living things.  In plants and algae, it occurs in the stroma, which is the fluid that surrounds the thylakoids in the chloroplast.  The product of carbon fixation is a 3-C compound called glycerate 3-phosphate.  The formation of this compound is the reaction between carbon dioxide and a 5-C compound called ribulose biphosphate (RuBP) to produce two molecules of glycerate 3-phosphate.  The reaction that catalyzes this reaction is called ribulose biphosphate carboxylase, commonly called rubisco.  The stroma contain large amounts of rubisco to maximize carbon fixation (Oxford, 2014).

RuBP is a 5-C sugar derivative, but when it is converted to glycerate 3-phosphate by adding C and O, the amount of hydrogen in relation to oxygen is reduced.  In sugars and other carbs, the ratio of H to O is 2:1.  Hydrogen has to be added to glycerate 3-phosphate by a reduction reaction to produce carbohydrate.  This involves ATP and reduced NADP, produced by the LDR.  ATP provides the energy needed to perform the reduction and reduced NADP provides the H atoms.  THe product is a 3-C sugar derivative, triose phosphate (Oxford, 2014).
The Calvin Cycle.  Triose phosphate is used to regenerate RuBP.  Two triose phosphate molecules can be combined to form hexose phosphate and hexose phosphate can be combined by condensation reactions to form starch.  Some triose phosphate in the chloroplast must be used to regenerate RuBP.  This process converts 3-C sugars into 5-C sugars and takes place in a series of steps.  This series of steps is called the Calvin Cycle. For the Calvin Cycle to continue indefinitely means as much RuBP must be produced as consumed.  Three RuBP are used and six triose phosphates are produced.  Five of the triose phosphates are needed to regenerate the three RuBPs.  This leaves one triose phosphates for conversion to hexose, starch or other products of photosynthesis.  To produce one molecule of glucose, six turns of the Calvin Cycle are needed, each of which contributes one of the fixed carbon atoms in the structure (Oxford, 2014).
Proudly powered by Weebly