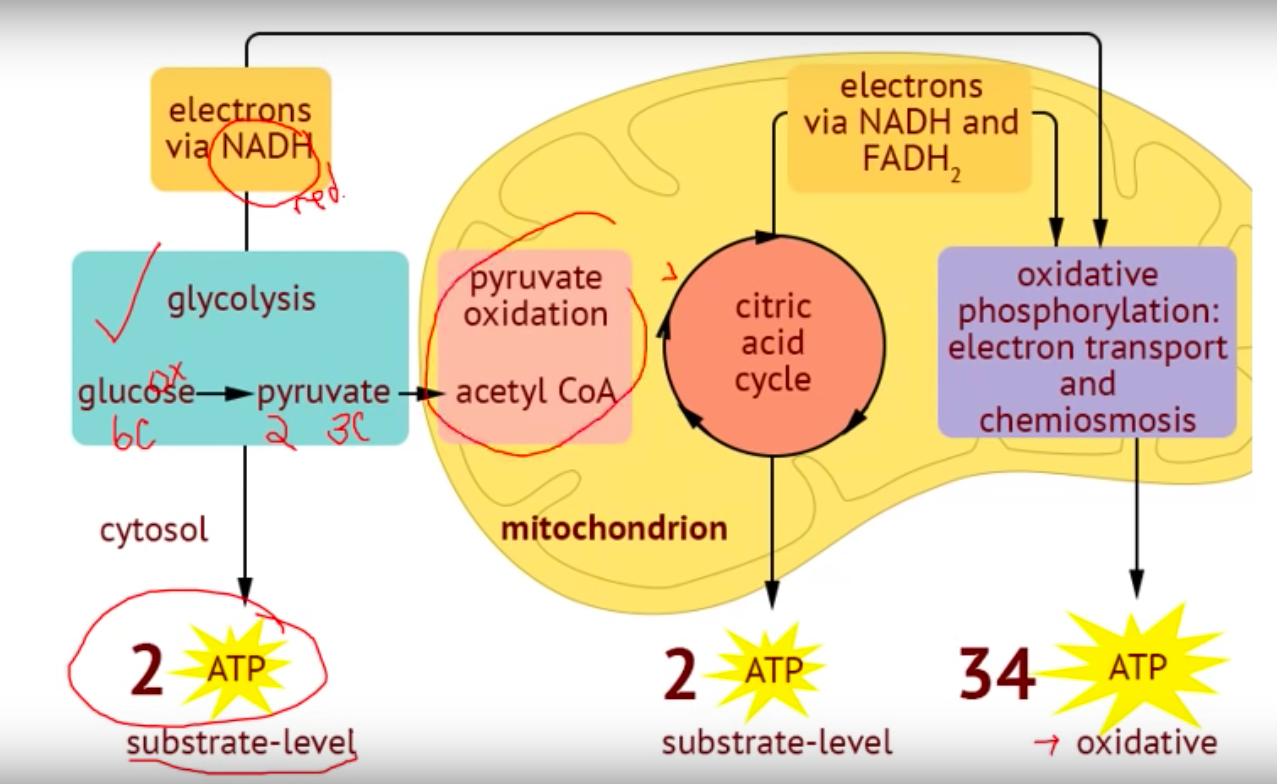 Image courtesy of Cheryl Hickman.  Video can be found HERE. 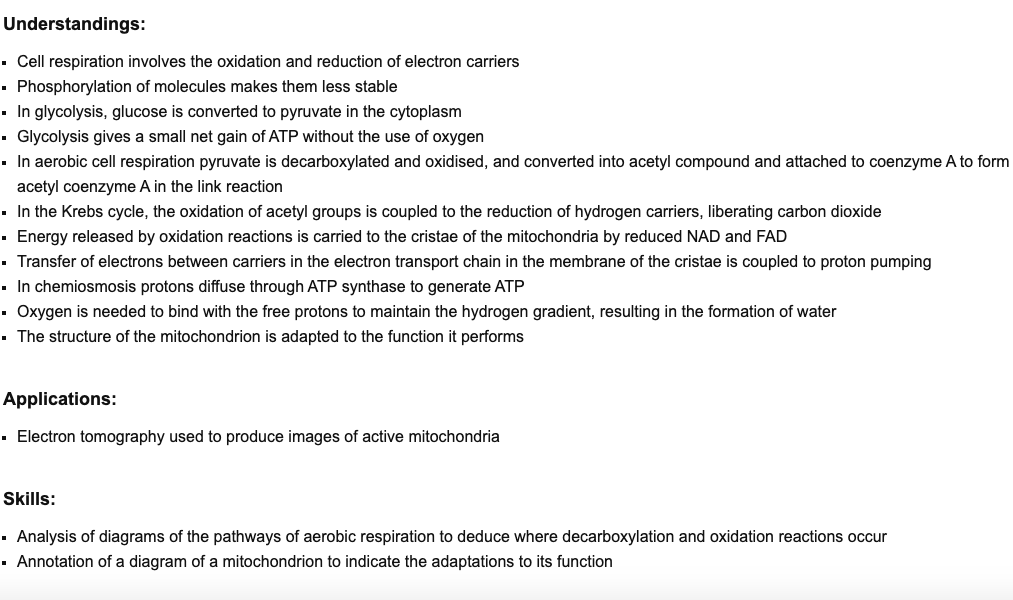 Mission 1: Respiration.  It's NOT breathing, yo!
Mission Objectives.  You should be able to...
1.  Explain the process of cellular respiration in stages.
2.  Explain how the structure of the mitochondrion is adapted to its function.
3.  Analyze diagrams of pathways of aerobic respiration to deduce where decarboxylation and oxidation reactions occur.

NAD works like this:  NAD + 2 electrons --> reduced NAD (because electrons are gained).

NAD initially has one positive charge and exists as NAD+.  It accepts 2 electrons like so: two hydrogen atoms are removed from the substance being reduced.  One of the hydrogen atoms is split into a proton and an electron.  The NAD+ accepts the electron and the proton (H+) is released.  The NAD accepts both the electron and proton of the other H atom (Oxford, 2014).

This reaction demonstrates that reduction can be achieved by accepting atoms of hydrogen because they have an electron. Oxidation can be achieved by losing H atoms. Oxidation and reduction can also occur through loss or gain of oxygen atoms.  Phosphorylation of molecules makes them unstable.  It is the addition of a phosphate ion to an organic molecule.  For many reactions, the purpose of phosphorylation is to make the phosphorylated molecule more likely to react.  Another way of saying this is that phosphorylation can activate the molecule (Oxford, 2014).

The hydrolysis (splitting) of ATP releases energy to the environment and is therefore considered exothermic.  Many reactions in the body are endothermic and therefore are non-spontaneous unless they are coupled with an exothermic reaction.  Many metabolic processes are coupled to the hydrolysis of ATP (Oxford, 2014).

Cellular Respiration a nutshell: Cells metabolize organic nutrients by slow oxidation.  Enzymes break the covalent bonds holding nutrients (such as glucose) together.  Energy is released in the form of ATP (adenosine triphosphate). Glycolysis is the first step.  It takes place in the cytoplasm.  A 6-carbon glucose is broken down into two 3-carbon molecules called pyruvate.  Two ATP are required for glycolysis to take place and the process yields 4 ATP.  This is a net gain of two ATP at the end of glycolysis.

The two pyruvate enter a mitochondrion and each loses a carbon dioxide to become acetyl-CoA.  The Krebs Cycle begins here.  Two more carbon dioxide molecules are released during this process.  More ATP is generated during the Krebs Cycle.  The final step is the electron transport chain (ETC), which is a series of oxidation-reduction reactions.  The majority of ATP comes from the ETC (34-38 molecules from one molecule of glucose).
Glycolysis.  This takes place in the absence of oxygen.  It produces pyruvate and two molecules of ATP.  It converts a 6-C glucose into 2 3-C pyruvate molecules.  This is not a single-step process; it is a metabolic pathway of many small steps.  The phosphorylation reactions reduce the activation energy required for reactions that follow and make them more likely to occur.  Page 382 in your text shows you the metabolic pathway of how glucose becomes fructose-1,6-biphosphate.  The fructose-1,6-biphosphate is split to form two molecules of triose phosphate.  These molecules are then oxidized to form glycerate-3-phosphate in a reaction that yields enough energy to make ATP.  The oxidation is carried out by removing hydrogen atoms.  The hydrogen is accepted by NAD+, which becomes NADH and H+.  The phosphate group is transferred to ADP to produce more ATP and pyruvate.  Page 383 shows the metabolic pathway for triose phosphate to become glycerate-3-phosphate.

Two molecules of pyruvate are produced in glycolysis.  If oxygen is present, it is absorbed into the mitochondrion where it is fully oxidized.

This is not a single step process.  Carbon and oxygen are removed in the form of carbon dioxide in reactions called decarboxylations.  The oxidation of pyruvate is achieved by the removal of pairs of H atoms.  The H carrier NAD+ and a related compound called FAD accept the H atoms and pass them on to the electron transport chain (ETC where oxidative phosphorylation will occur.  See p. 383, figure 2.
​
The Link Reaction.  Here the pyruvate is converted into acetyl coenzyme A (a-coe-A).  The pyruvate is sent to the mitochondrial matrix.  Once there, the pyruvate is decarboxylated and oxidized to form an acetyl group.  Two high energy electrons are removed from pyruvate.  These react with NAD+ to produced reduced NAD.  This is called the link reaction because it links glycolysis to the Krebs Cycle and the Electron Transport Chain.
The Krebs Cycle.  In this cycle, there are two more decarboxylations and four more oxidations.  Most of the energy released in the oxidations of the link reaction and the Krebs Cycle (KC) is used to reduce the H carriers NAD+ and FAD).  The energy therefore remains in chemical form and can be passed on to the next part of respiration: oxidative phosphorylation.  For every turn of the cycle, the production of reduced NAD occurs three times, decarboxylation occurs twice, and the reduction of FAD occurs once, and one molecule of ATP is generated (Oxford, 2014).

Oxidative Phosphorylation.  Energy released by oxidation reactions is carried to the cristae of mitochondria by reduced NAD and FAD.  Reduced NAD is produced during glycolysis, the link reaction and the KC.  The final part of aerobic respiration is called oxidative phosphorylation (ox-phor) because ADP is phosphorylated to produce ATP using the energy released by oxidation.  The substances oxidized include FADH2 generated in the KC, and the reduced NAD generated in glycolysis, the link reaction and the KC.  Thus, these molecules are used to carry the energy released in these stages to the cristae (Oxford, 2014).
​
​Image courtesy of Khan Academy. 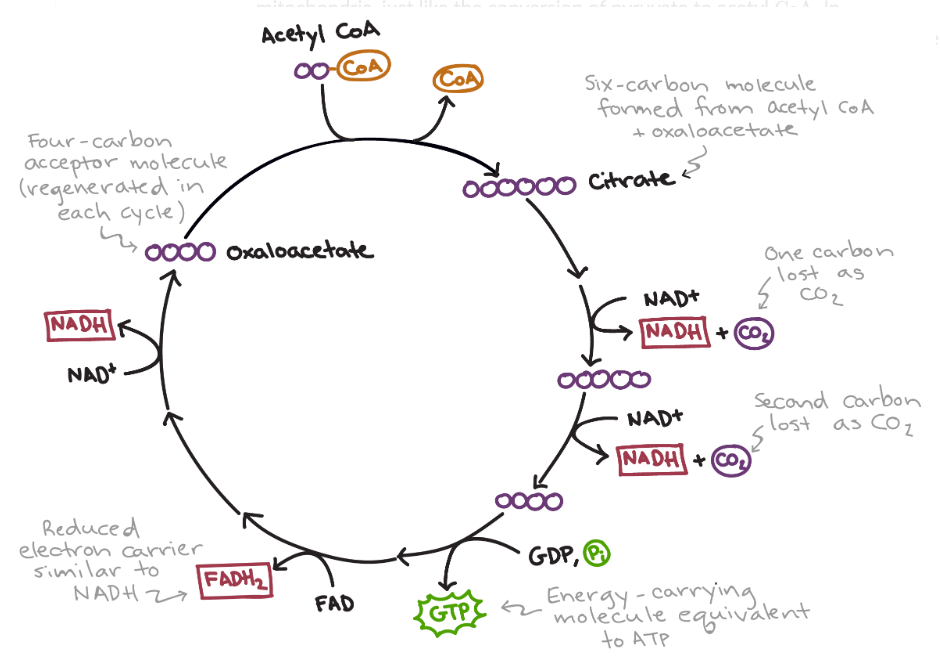 The Electron Transport Chain.  Transfer of electrons between carriers in the ETC is coupled to proton pumping.  The final part of aerobic respiration is called oxidative phosphorylation because ADP is phosphorylated to produce ATP using energy released by oxidation.  The main substance oxidized is reduced NAD.  The energy is released in a series of small steps carried out by a chain of electron carriers.  As electrons are passed from carrier to carrier, energy is utilized to transfer protons across the inner membrane from the matrix into the inter membrane space.  The protons then flow through ATP synthase down their concentration gradient providing the energy needed to make ATP (Oxford, 2014).

Chemiosmosis.​  Protons diffuse through ATP synthase to generate ATP.  This happens in the inner mitochondrial membrane. A chemical substance (H+) moves across a membrane down the concentration gradient.  This releases the energy needed for ATP synthase to make ATP.  See p. 385 for the pathway.  Oxygen is needed to bind with the free protons to form water to maintain the H gradient.  Oxygen is the final electron acceptor in the mitochondrial ETC.  The reduction of the oxygen molecule involves both accepting electrons and forming a covalent bond with H2.  By using up the hydrogen, the protein gradient across the mitochondrial membrane is maintained so chemiosmosis can continue (Oxford, 2014). 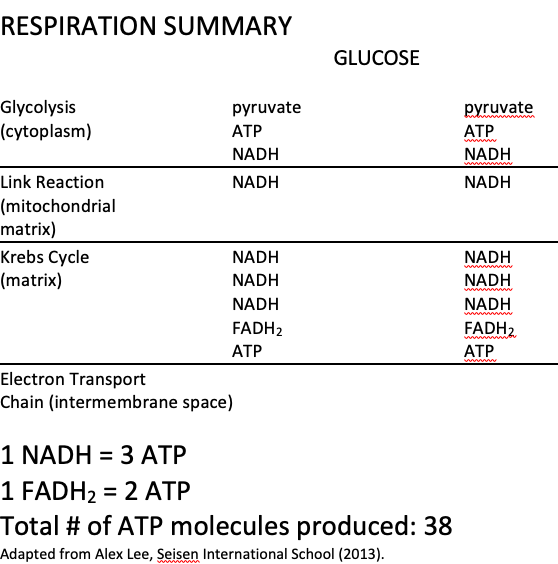