​Mission 1: Do the Neuron Dance!!!
Mission Objectives.  You should be able to...
1. Describe the structure of a neuron.
2. Explain how the structure of a neuron is suited for its function.
3. Outline the process of action potential.
4. Describe the Na+/K+ pump and explain its function.
5. Explain what happens at a synapse in terms of chemistry.
6.  Explain the secretion and reabsorption of acetylcholine by neurons at synapses.
7.  Describe how blocking of synaptic transmission at cholinergenic synapses in insects by the binding of neonicotinoid pesticides to acetylcholine receptors.

​The brain and spinal cord make up the central nervous system.  The CNS receives sensory information from receptors before interpreting them.  If a response is required, some part of the CNS initiates a response called a motor response.

When there is a bundle of neurons, a nerve is formed.  Two sets of nerves make up the connection between the CNS and the body.  (1) spinal nerves which emerge directly from the spinal cord.  Some are sensory and some are motor. There are 31 pairs of spinal nerves. (2) Cranial nerves emerge from the brain stem.  There are 12 pairs of cranial nerves.

Neurons can be long or short.  There are three main parts to the structure of a neuron: dendrites, axon, and the cell body.  At the end of the axon are terminal buttons that release neurotransmitters that continue the impulse.  Impulses are carried away from the dendrites along the axon and results in the release of a neurotransmitter at the synaptic terminal.  This is a one-way trip; impulses do not travel in the opposite direction.

Below is a diagram of a neuron from the Pearson textbook.
​ 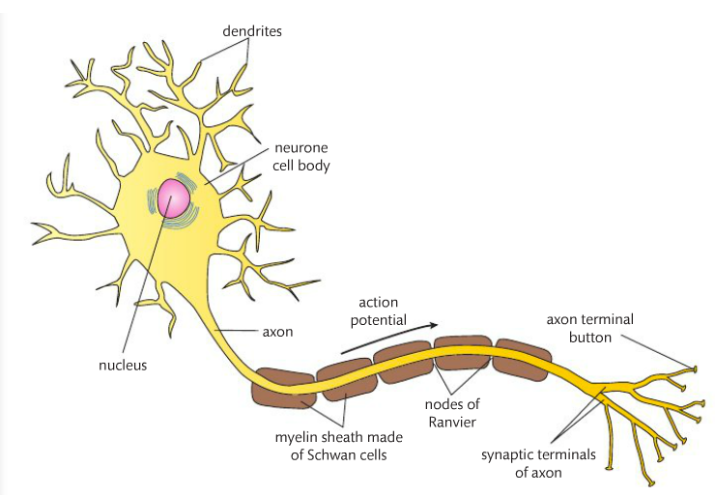 In regards to impulses (or action potentials) being transmitted, there are two components: repolarization and depolarization.  Repolarization is sometimes called resting potential and it is the time when there is no impulse being sent.  The resting potential is created by the active transport of sodium and potassium ions in different directions.  Sodium ions are transported out of the axon and into the intercellular fluid.  Potassium ions are transported into the cytoplasm.  This is called the Na+/K+ pump.  For every three sodium atoms out, there are two potassium ions in.  The result of the position of the charged ions leads to a net positive charge outside the axon and a net negative charge inside the axon.

In order for action potentials to "go" there is a minimum threshold that must be reached.  After depolarization, there is a return to the resting potential. 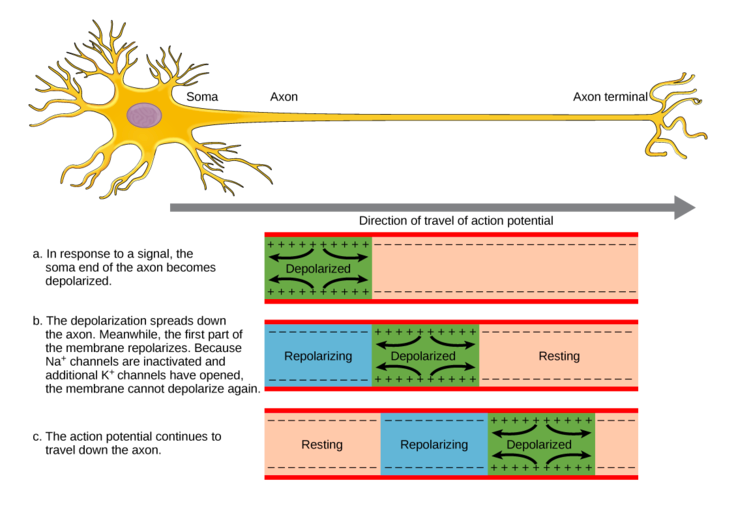 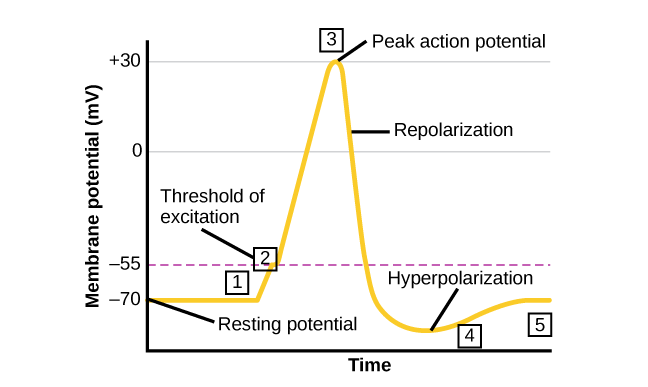 Here is a cool animation with questions.  Check it out!!!  Here's another link too.

Saltatory conduction is when an action potential skips from one node of Ranvier to another as the impulse progresses along the axon.  The myelin sheath acts as an insulator and prevents charge leakage (ions falling out).  The cytoplasm within the axon is electrically conductive and this allows the action potential to skip from one node to the next.  This has two benefits: the impulse travels faster than it would in non-myelinated tissue, and less energy (in the form of ATP) is used for the transmission of impulses.

Mission 2: Synapses...Where the Party At?
Mission Objective.  You should be able to...
1. Describe what happens at a synapse.

The acetylcholine diffuses across the gap and binds with a receptor on the dendrite end of another neuron.  This results in an ion channel opening and sodium ions (Na+) diffusing through the channel.  This process initiates the action potential to begin moving down the neuron because it is depolarized.

Then acetylcholine breaks down via an enzyme (acetylcholinesterase) and is released from the receptor protein.  The ion channel closes so that Na+ can't get through.  The acetylcholine fragments diffuse back across the gap to be reassembled.

Let's look at the animation one more time.  Then let's watch this short video.
Homework:  The following lessons can be found in your Human Physiology work packet.  Lessons #192, #193, #194 and #195 review everything from section 6.5.  I encourage you to use it as a test review.  Also, complete the below problems.  You will dissect sheep brains on November 30, 2018.  Go HERE to review prior to the dissection. 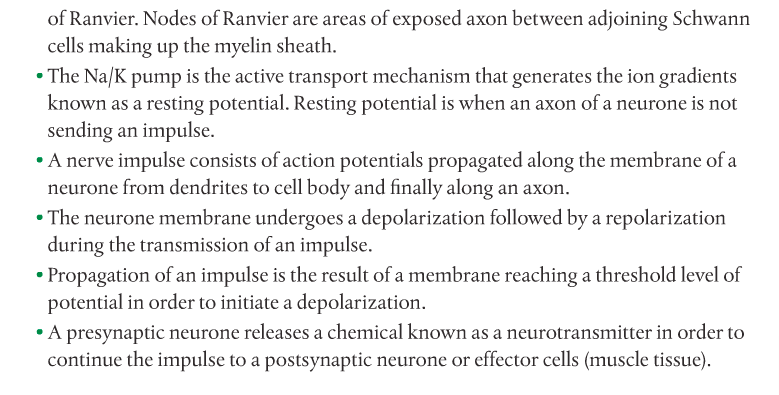 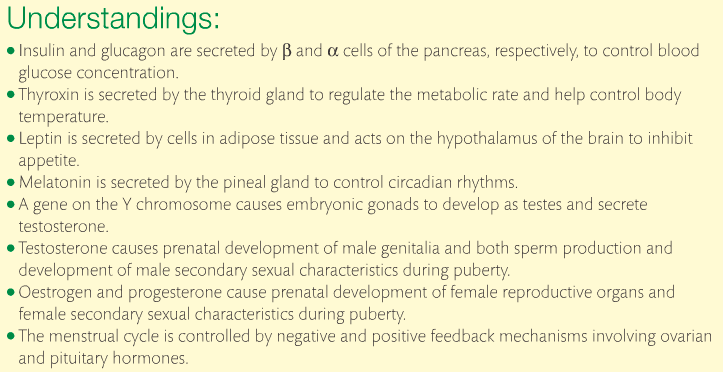 ​Mission 1: Sugar Daddy
Mission Objectives.  You should be able to...
1. Define "homeostasis" and list some indicators of it.
2. Explain how negative feedback mechanisms work to maintain homeostasis.
3. Describe how glucose is regulated.
4. Explain how diabetes is contracted and differentiate between Types I and II.

When the body stays within certain limits for many physiological variables, it it called homeostasis. Homeostasis is a kind of internal balance, and the body has triggers that alert us when the balance is off.  Examples of physiological variables include: blood pH, blood pressure, blood glucose, blood carbon dioxide levels, body temperature, and water balance in tissues.  Each of these variables have an expected "normal" point or range.  For instance, the average body temperature for humans is 98.6 degrees F (37 degrees C).  Average blood pressure is considered to be 120/80, and average blood pH is 7.4.

​Semi-random question:  What is positive feedback?

Below are two short videos discussing homeostasis in more detail.
Cells rely on glucose for respiration.  Respiration, the metabolic process that produces energy in the form of ATP, is continuous.  Therefore, the blood glucose concentration (from now on I'll refer to this as [glucose]) fluctuates. Glucose that comes from the food you eat is absorbed into the bloodstream.  In spite of the fluctuations, blood glucose levels have to be maintained around its normal point.  Negative feedback mechanisms ensure this happens.

The glucose ends up in the hepatic portal vein (which connects to the liver).  Here, the [glucose] has large fluctuations depending on when you last ate.  ​
When [glucose] is too high...

Cells that produce insulin in the pancreas are called beta cells.  The insulin is secreted directly into the blood and all cells are exposed to  it.  The function of insulin is to open protein channels that allow glucose to diffuse into the cells via facilitated diffusion.  When [glucose] is too high, insulin stimulates liver cells (called hepatocytes) to absorb the excess glucose and turn it into glycogen.  Glycogen is a polysaccharide.  The glycogen then is stored in the cytoplasm of liver cells.

When the body has not received any nutrients for a long time, [glucose] is low.  The body then has to use the stored glycogen for energy.  Alpha cells of the pancreas secrete the hormone glucagon.  Glucagon stimulates hydrolysis of glycogen and turns it back into glucose, which increases [glucose] in the blood.

Diabetes.  This is a disease that is characterized by too much glucose in the blood. There are two types.  Type I is when the beta cells do not produce enough insulin.  Type II occurs when there is enough insulin in the blood, but it cannot diffuse into the body cells where it is needed.  Type I is controlled by insulin injections and Type II is controlled by diet.  Type I is an autoimmune diseases, which means that the body is attacking its own beta cells and therefore little to no insulin is produced.  Type II is more common, where the body cells do not respond to the insulin in the blood.
Mission 2: The Blood Curse.
Mission Objectives.  You should be able to...
1. Explain how sex is determined when eggs and sperm unite.
2. Compare the effects of progesterone, estrogen and testosterone on secondary sexual characteristics.
3. Describe the menstrual cycle.

When eggs fuse with sperm, the resultant zygote gets 50% of its genetic makeup from Mami and 50% from Papi.  This process allows for genetic variation in our species.  Hormones play a role in the regulation of sexual physiology. Testosterone in males determines the development of male genitalia, ensures the development of secondary sex characteristics during puberty, and ensures sperm production following puberty.  In females, progesterone and estrogen do the same thing.  The structure of the female and male reproductive systems are adapted for the production and release of gametes (sex cells; eggs (or ova) and sperm). The female reproductive system ensures a suitable location for fertilization and provides an environment for fetal growth until birth.

The sex of the zygote is determined by the father.  Females produce X chromosomes, always and forever.  Males produce either an X or a Y.  XX is the genotype for female and XY is the genotype for male.  XX alleles result in the production of high levels of estrogen and progesterone, which yields female reproductive structures.  Genes on the Y chromosome are responsible for dictating growth as a male.  Below is a detailed list of the role of sex hormones during puberty.

Before the 8-week mark, the structures that will become sex organs are the same in male and female zygotes.  The same embryonic tissue that becomes a clitoris in women becomes a penis in men.  The same embryonic tissue that becomes ovaries in females becomes testes in males.  It is accurate to say that prior to the 8th week of pregnancy, female and male organs are homologous. 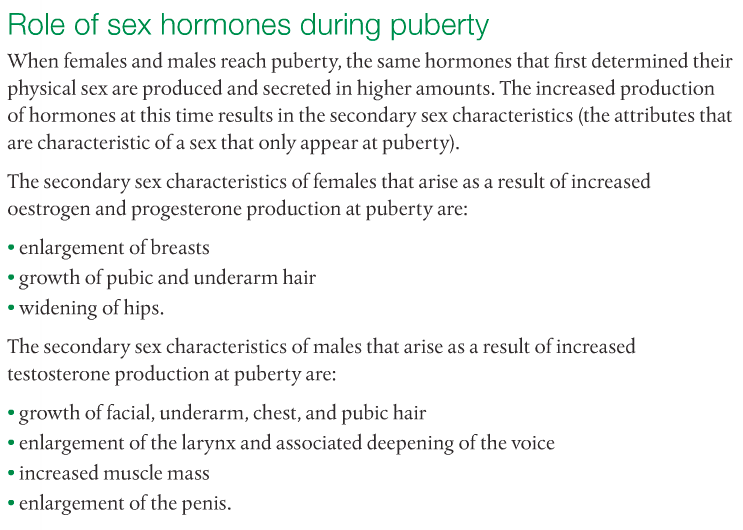 The hypothalamus produces a hormone called gonadotrophin-releasing hormone (GnRH).  Its target is the pituitary gland, which responds by releasing two hormones: follicle-stimulating hormone (FsH) and lutenizing hormone (LH). The target of these hormones are the ovaries.  The effects of FsH and LH include secreting and increasing the production of estrogen.  When estrogen is released into the bloodstream, its target is the blood vessels in the endometrium. The blood vessels become dense and the endometrium becomes highly vascular.  Estrogen also signals the pituitary gland to release more FsH and LH.  This is a positive feedback mechanism.  Below is an image from the Pearson textbook. 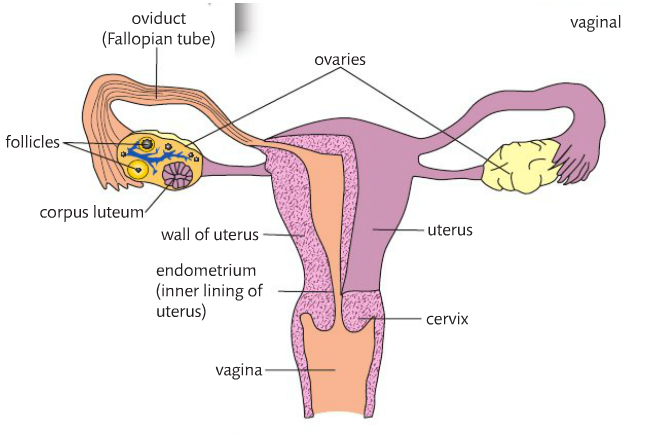 FsH and LH also cause the growth of Graafian follicles.  Inside the follicles are oocytes. When FsH and LH spike, ovulation occurs.  This is when the oocyte bursts out of the Graafian follicle.  The oocyte enters the Fallopian tube soon after ovulation.  The leftover follicle cells remains in the ovary and begin to produce and secrete another hormone, progesterone.  The cells of the outer ring fill in the broken area left by the oocyte and forms a structure called the corpus luteum.  The corpus luteum will be actively producing progesterone for only 10-12 days.  Progesterone maintains the thickened endometrium, and as long as it is produced, the endometrium will not break down and an egg is free to implant.  The high levels of progesterone and estrogen let the hypothalamus know not to secrete any more GnRH so that another follicle isn't produced at this time.

After the 10-12 day period, if there is no implantation, the levels of estrogen and progesterone break down.  Without any progesterone to maintain it, the endometrium breaks down and menstruation begins.  This would be called the "first" day of the cycle because it's noticeable.  But being an actual cycle, there is no true beginning or end of the menstrual cycle. 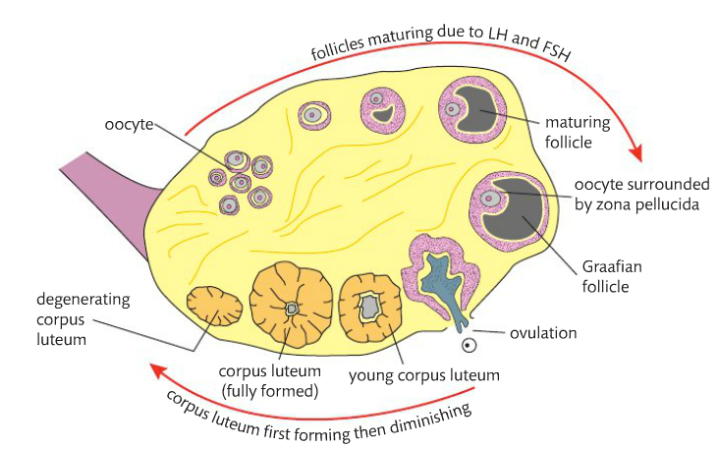 Below is Figure 6.28 from the Pearson textbook. The X-axis represents time in days.  The Y-axis does not have a scale, but it illustrates the hormone behavior, ovarian activity and endometrium thickness over a 28-day cycle. Halfway (the middle line) is ovulation, the release of the egg from the ovary.   Between this time and menses, the egg is ready for fertilization.

Gonadotrophin levels are highest during ovulation (when LH and FsH are released). Estrogen levels are higher just before ovulation, corresponding to the release of the egg and begin to decrease afterwards.  Progesterone levels increases after ovulation, corresponding to the thickness of the endometrium.  At the point where the endometrium is thickest, if there is no implantation, the lining sheds and menses begins.

So if you were to see this on an actual graph, how would you explain it?  Try using these: 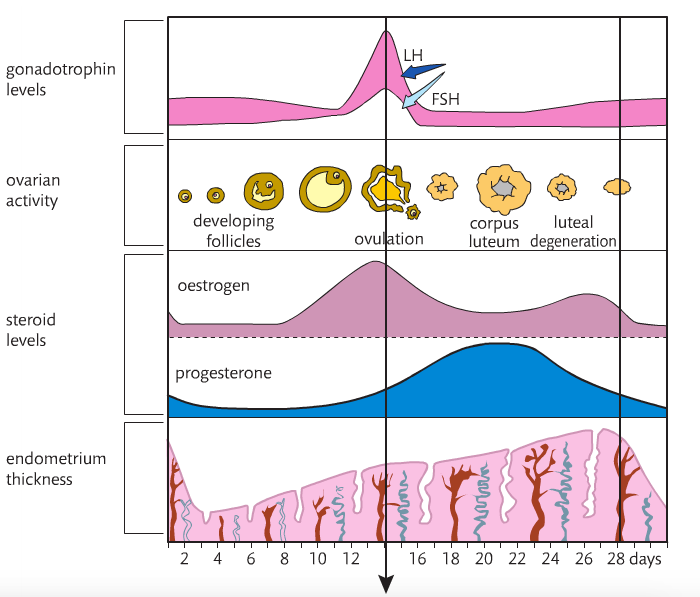 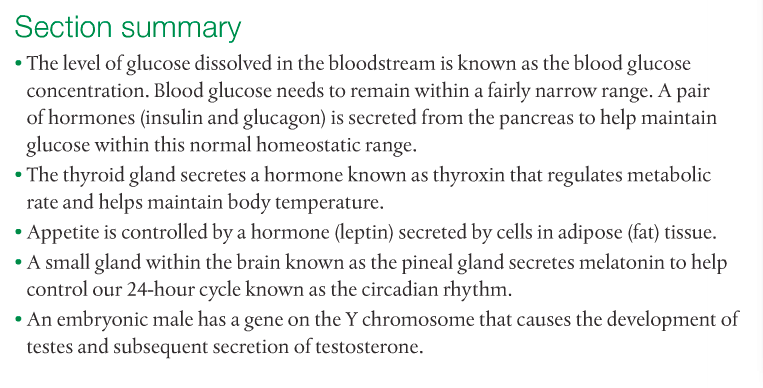 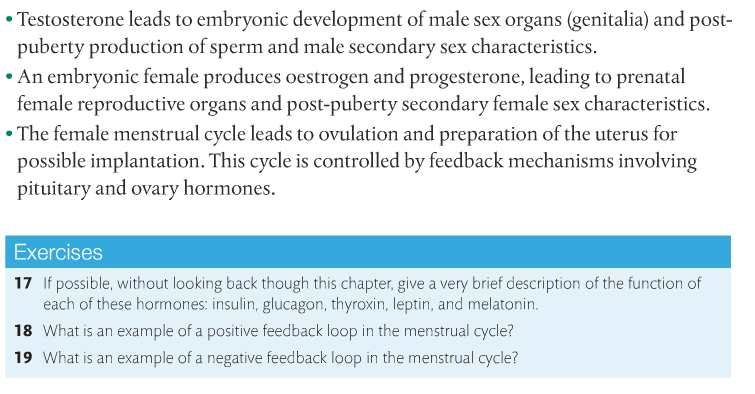 HOMEWORK: I sent you guys a list of questions from the Kognity database that you should have finished a week from now.
Proudly powered by Weebly