6.3: Immunity
​
Mission 1: The Skin You're In.
Mission Objectives. You should be able to...
1.  Explain the causes and consequences of blood clot formation in coronary arteries.
2.  Understand the ways in which the body is able to keep out pathogens.
3.  Explain the roles of white blood cells, platelets and macrophages.
4.  Describe what happens when a blood vessel is damaged.
​5.  List the steps of a typical primary immune response.
6.  Explain Florey & Chain's experiments to test penicillin on bacterial infections in mice.
7.  Describe the effects of HIV on the immune system and methods of transmission.

Our bodies are built to keep out pathogens.  Your skin  has two layers: dermis and epidermis.  The epidermis is what you see, and it is mainly dead cells that we lose constantly.  The dermis is alive by comparison.  It contains blood vessels, sweat glands, sensory receptors and structural cells called dermal cells.  Dermal cells rise to the top and become the epidermis.  As long as your skin remains intact, you are protected from most pathogens.  This is why open cuts and sores need to be cleaned and treated. 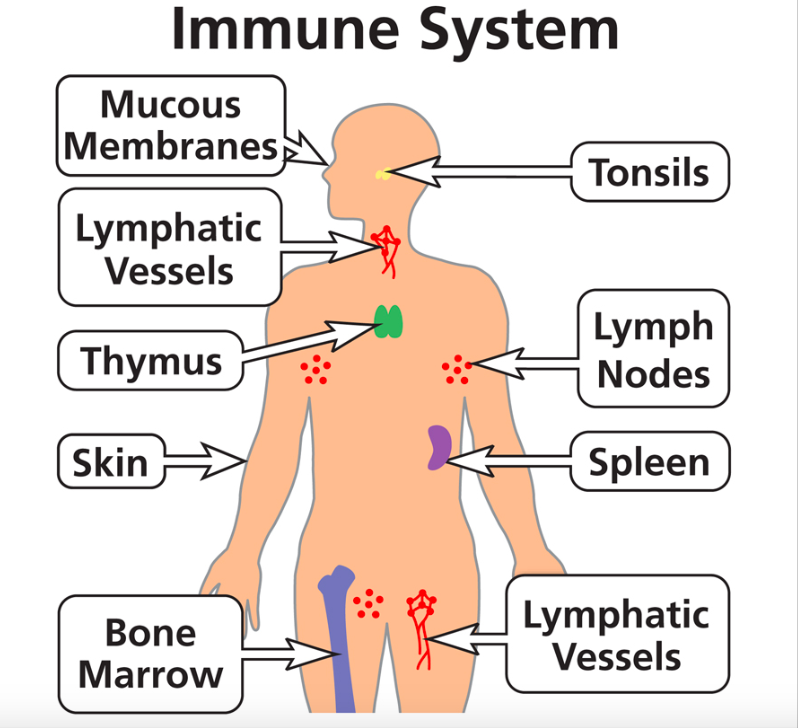 Some locations are not covered by the epidermis.  They keep pathogens out via mucous membranes.  These membranes produce mucus which trap incoming pathogens and prevent them from reaching cells they could possibly infect.  Such areas include the nasal passages, trachea, urethra and the vagina.

Blood Clotting:  When blood vessels rupture, blood can escape the circulatory system.  If these damaged vessels are in the skin, pathogens have an entryway into the body.  The process of blood clotting seals damaged blood vessels to prevent blood loss and pathogens from entering.  Two clotting proteins (prothrombin and fibrinogen) hang out in the blood and are inactive until they receive a signal to start the clotting process. Platelets also help in clotting.

This video walks you through the clotting process.
Primary & Secondary Immune Response.  When a pathogen dares enter the body, the immune response begins.  The primary immune response (PIR) takes place when there is a first encounter with a particular pathogen.  If the pathogen has been in the body more than once, then secondary immune response (SIR) takes place.  PIR takes at least a week before any success is experienced.  By comparison, SIR is shorter and more intense, which is why symptoms are rarely experienced.

White blood cells (WBCs; also called leucocytes) fight off pathogens.  They also provide a level of immunity for pathogens we encounter more than once.  Macrophages are large WBCs that can change their shape to surround an invading cell through the process of phagocytosis.  As a result, they can get small enough to fit into capillaries.

Below are the steps of a typical PIR from the Pearson text. 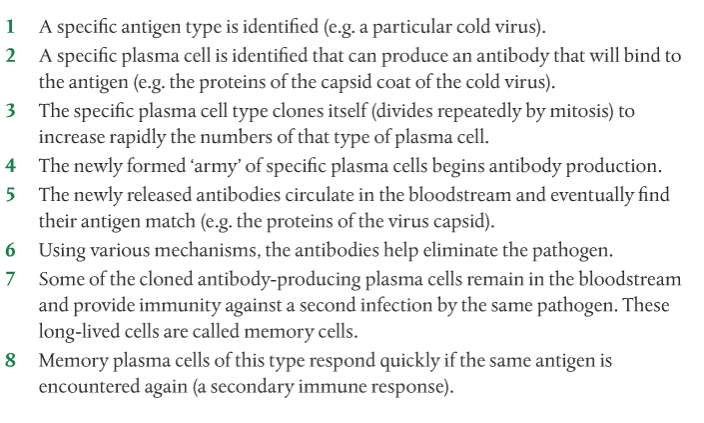 Homework:  Review Mission 1.  Complete Workbook Lessons: #177-180.  Read about Florey & Chain's testing of penicillin using mice.  What were the ethical issues they faced and would they be able to conduct that same research today?  Explain your reasoning using evidence.

Mission 2: HIV/AIDS
Mission Objective.  You should be able to...
1.  Describe how HIV attacks cells.
​
HIV attacks T-cells.  T-cells (T-lymphocyte) are a specialized cell that assists in immune response.  The virus injects its DNA into the T-cell and the infected cell replicates to make more infected cells.  As a result, the T-cell’s ability to fight infections is reduced.

These infected cells in humans are key lymphocytes that are involved in immune response.  Someone with HIV will experience a drop in lymphocyte population and will lose the ability to produce enough antibodies.  HIV takes a long time to manifest before an infected person loses their immune response capability.  The resulting immune disease is called AIDS.

Below is an image taken from www.aids.gov.  It describes the HIV life cycle, which is not something you need to know. 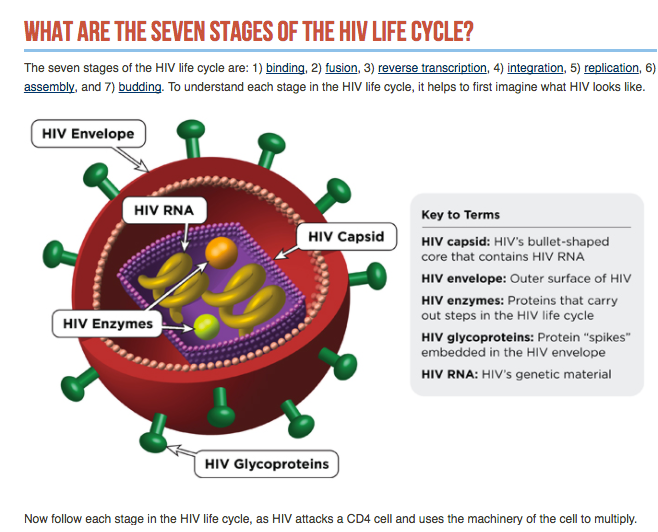 Complete workbook lessons #180-183.
6.4 Respiration
Mission 1: Breathe, Baby...Breathe!
Mission Objectives. You should be able to...
1.  Describe the process of ventilation.
2.  Compare and contrast type I and type II pneumocytes.
3.  Describe how air is carried into the lungs and reach the alveoli.
4.  Explain how the muscles contract and release to bring air into the lungs and out of the lungs.
5.  List three examples of antagonistic muscle action.

The process of aerobic respiration requires oxygen and releases carbon dioxide.  This is a biochemical pathway in which the bonds within a glucose molecule are broken down to release energy.  The energy is stored as molecule of ATP (adenosine triphosphate).

Ventilation is the process by which we fill our lungs with air and then expelling that air.  Within the lungs are small sacs called alveoli.  Oxygen in the alveoli diffuses into the bloodstream and carbon dioxide from the bloodstream diffuses into the alveoli.  Each breath maintains the concentration gradients that allow diffusion of oxygen into and carbon dioxide out of the nearby capillary beds that are near the alveoli.

The mechanism of ventilation is a complex series of events that occur without us realizing it.  Lung tissue is passive, not muscular, so the lungs aren’t capable of purposeful movement.  Muscles that surround the lungs (diaphragm, abdominal, and intercostal) allow for purposeful movement.  Breathing is based on the inverse relationship between pressure and volume.  When volume increases, pressure decreases.  When pressure increases, volume decreases.  Air comes into the lungs via the trachea, and only the trachea.  Your lungs are enclosed in a cavity called the thorax.

Examine the image below, courtesy of the Pearson textbook. 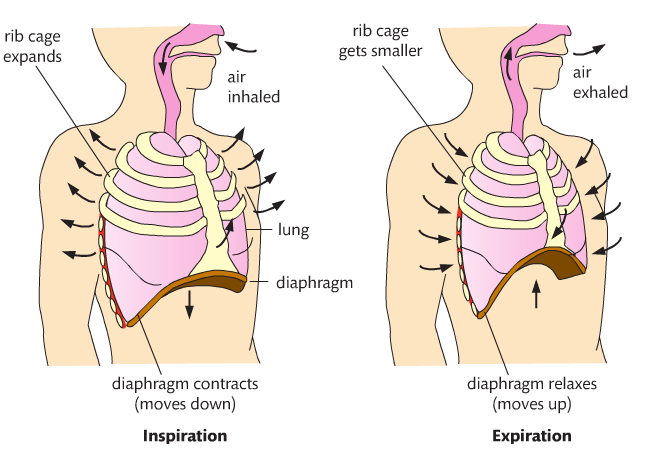 Gas exchange occurs in the alveoli.  When you inhale, the air enters the trachea, and then moves into the left and right primary bronchi.  After that, the air moves into progressively smaller and smaller bronchi, and then into smaller branches called bronchioles.  After passing through the bronchioles, the air enters alveoli.  Alveoli are found in clusters at the end of bronchioles.  They look like bunches of grapes.  Capillary beds surround the alveoli. 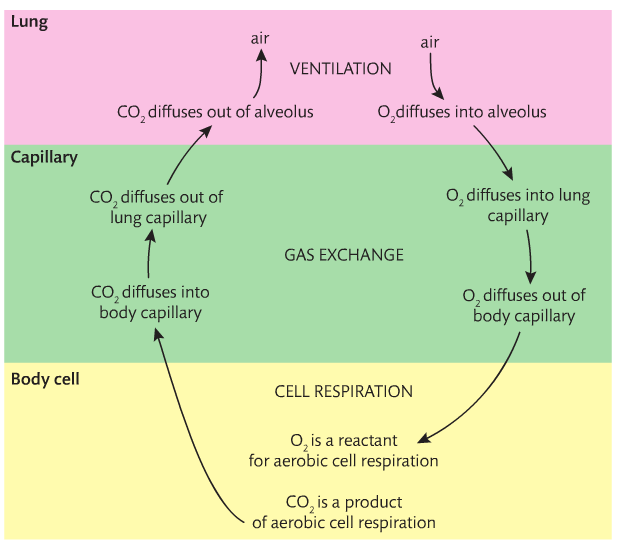 Alveoli are composed of specialized cells called pneumocytes.  They are composed of a single layer of cells that allow for gas exchange.  There are two kinds of pneumocytes: type I and type II.  Type I are thin with large membrane surface area.  They cannot undergo mitosis.  Type II are cube-shaped and does not have as much surface area as a type I.  Type II secretes a surfactant that reduces the surface tension of the inner surface of alveoli, which keeps them from sticking to each other.  These pneumocytes  are able to undergo mitosis.

​Mission 2: That Mess'll Kill Ya!
Mission Objective.  You should be able to...
1. Describe and explain the causes and consequences of emphysema and lung cancer.

Emphysema is a disease where the alveoli are progressively destroyed.  One of the major causes is smoking.  Other causes include marijuana smoke, coal dust, air pollution and fumes from manufacturing plants.  Over time, emphysema turns healthy alveoli into large, irregular-shaped structures with gaping holes (see below).  This reduces the amount of surface area for gas exchange and leads to shortness of breath.  Over time, the inability to catch one's breath becomes constant.  There is no cure for emphysema, but to prevent it, one should not smoke, wear protective masks when in contact with air pollution and working around dust or chemical fumes.

Image from the Pearson text. 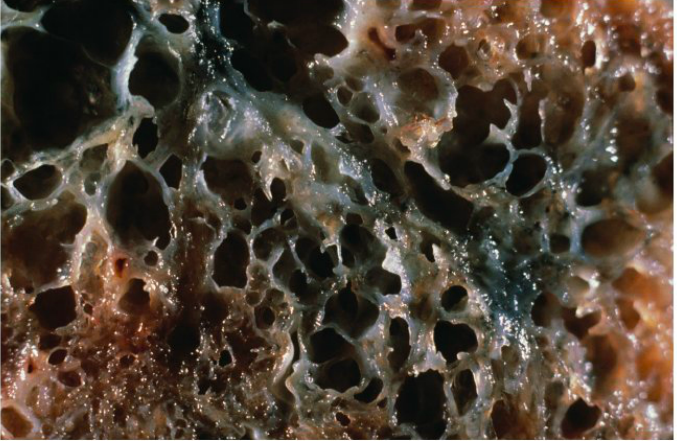 Lung cancer comes from the formation of malignant tumors in the lungs, obviously.  It is a cancer that is easily spread (metastasizing).  Targets for the spreading of lung cancer include the brain, bones, liver and adrenal glands.  The tumor takes over the alveoli and bronchioles.  The larger the tumor, the more the lung tissue becomes dysfunctional.  Internal bleeding can result.  Lung cancer is caused by one or more carcinogens, including cigarette smoke.  Early detection is the best treatment for lung cancer, as it has a very high mortality rate.

​Section summary from the Pearson text. 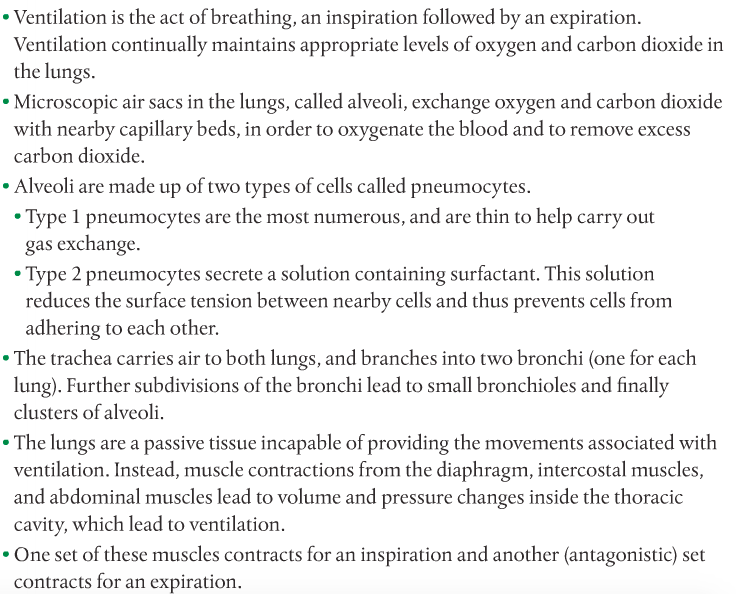