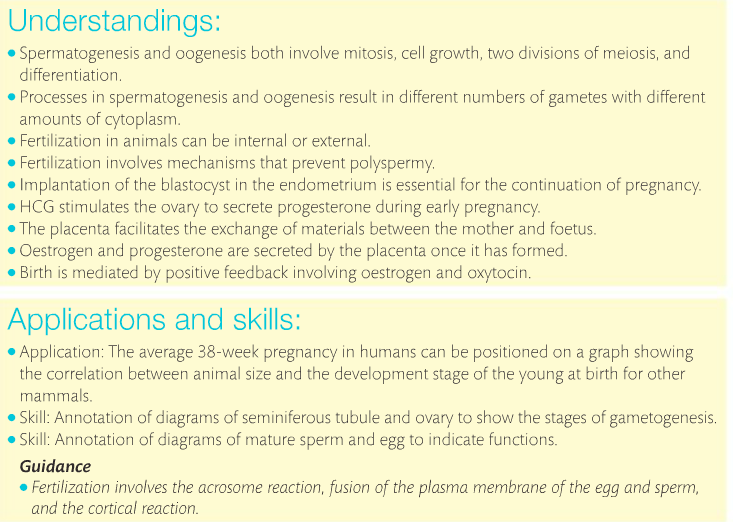 Mission 1: Gametogenesis I
Mission Objective: You should be able to...
1.  Explain the process of gametogenesis for sperm.

Gametogenesis is the process by which diploid precursor cells undergo meiosis to become haploid gametes.  In males, this is called spermatogenesis and in females, this is called oogenesis.  Spermatogenesis produces sperm and oogenesis produces ova or eggs.  The process of gametogenesis includes the following steps (1) multiple mitosis divisions and cell growth of precursor germ cells, (2) two meiotic divisions (meiosis I and II) to produce haploid daughter cells, and (3) differentiation of the haploid daughter cells to produce functional gametes (Bioninja, 2019).

Mitosis: Spermatogonia undergo mitosis to replenish their numbers.  Sperm cell production starts at puberty and continues throughout life.  Millions of sperm cells may be produced in a single day and mitosis replaces cells which become spermatozoa.  Meiosis: Spermatogonia undergo meiosis to produce spermatozoa.  The diploid number of chromosomes is reduced by half; the 23 homologous pairs becomes 23 individual chromosomes (Pearson, 2008).

Spermatogenesis is the production of spermatozoa (sperm, which is the term I'll use) in the seminiferous tubules of the testes.  At the beginning of puberty, the germline epithelium of the tubules undergo mitosis and the cells, called spermatogonia, undergo a period of cell growth and become spermatocytes.  The spermatocytes undergo meiosis I and II to form four haploid daughter cells called spermatids.  The spermatids then undergo differentiation in order to become functional sperm cells (Bioninja, 2019).

The below images come from the Pearson (2014) textbook. 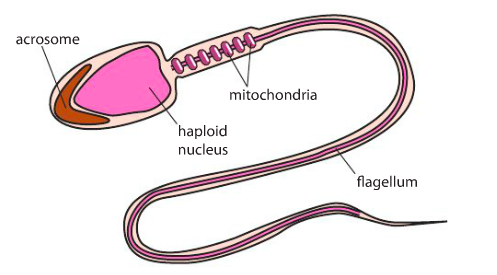 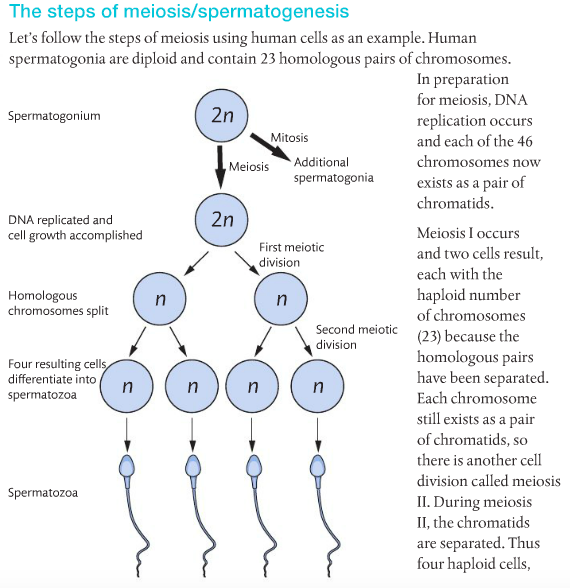 The above image is from Bioninja.

Mission 2: Gametogenesis II
Mission Objectives: You should be able to...
1.  Explain the process of gametogenesis for ova.
2.  List and describe the differences in the products for oogenesis and spermatogenesis.


​Oogenesis is the production of female ova within the ovaries and oviduct.  The process begins during fetal development when a large number of primordial cells are formed via mitosis.  These cells are called oogonia and undergo cell growth until they are large enough to undergo meiosis and become primary oocytes.  The primary oocytes begin meiosis but are paused in prophase I when granulosa cells surround them to form follicles.  This process lasts until puberty when the menstrual cycle starts.  Each month, FSH triggers the continued division of some of the primary oocytes and they will complete meiosis I to form two cells of unequal size.  One cell retains all of the cytoplasm to form a secondary oocyte and the other cell forms a polar body.  The polar body remains trapped in the follicle until it degenerates and the secondary oocyte undergoes meiosis II but pauses during metaphase II (Bioninja, 2019).

The secondary oocyte is released from the ovary during ovulation and enters the fallopian tube (oviduct).  The follicular cells surrounding the oocyte form a shell called a corona radiata and function to nourish the secondary oocyte.  If the oocyte is fertilized, chemical changes will trigger the completion of meiosis II and the formation of another polar body.  Once meiosis II is complete, the mature egg forms an ovum before fusing its nucleus with the sperm nucleus to form a zygote (Bioninja, 2019).

The below images are from the Pearson (2014) text and Bioninja. 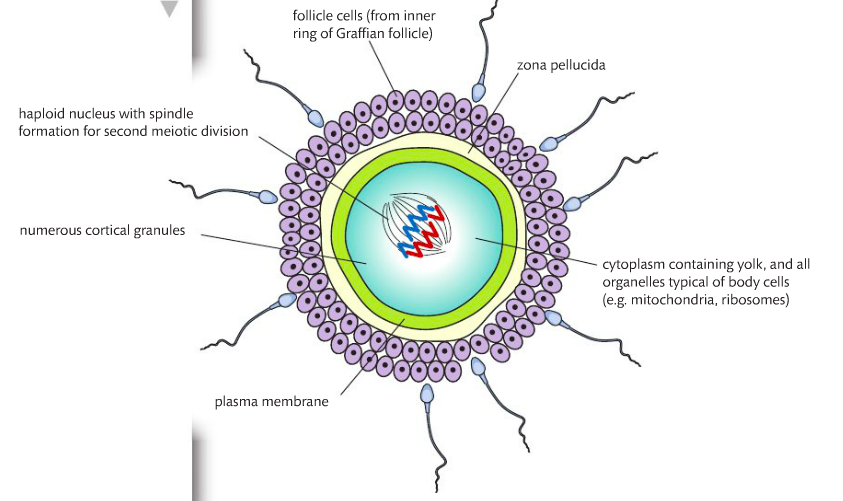 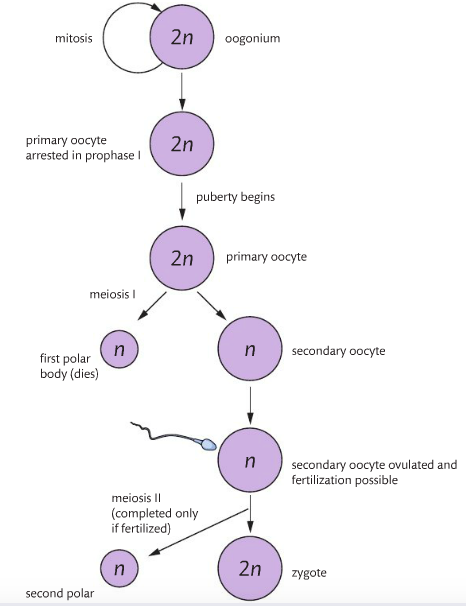 The processes of oogenesis and spermatogenesis have similarities and differences.  Below, taken from the Pearson (2014) text, is a table that compares and contrasts the two. 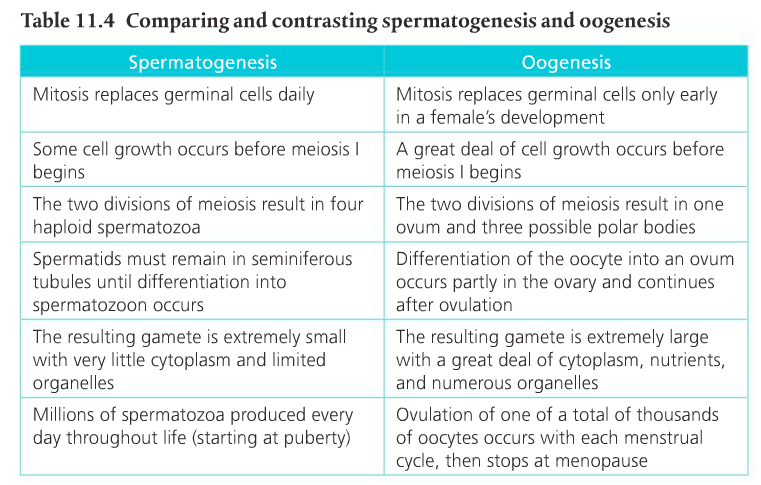 Mission 3: They Meet!!!
Mission Objectives: You should be able to...
1.  Describe the process of fertilization.

Fertilization is the union of an egg and a sperm to form a zygote.  Below is a clip from a movie titled "Look Who's Talking."  For those of you that prefer a classier video, go here.  For the record, the classy video is more comprehensive and worth a look.
Sperm membranes have receptors that can detect chemicals released by the egg, allowing directional swimming towards the egg, as shown in the video.  Once the egg is reached, certain events take place.  These events allow for the union of a single sperm with the egg. 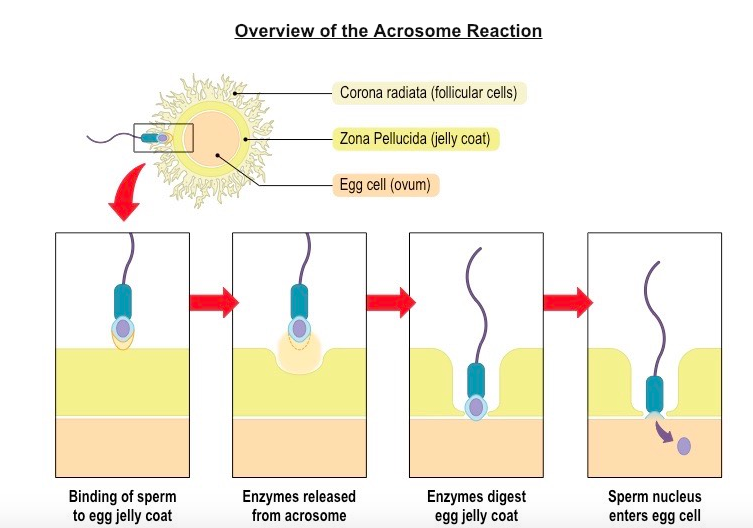 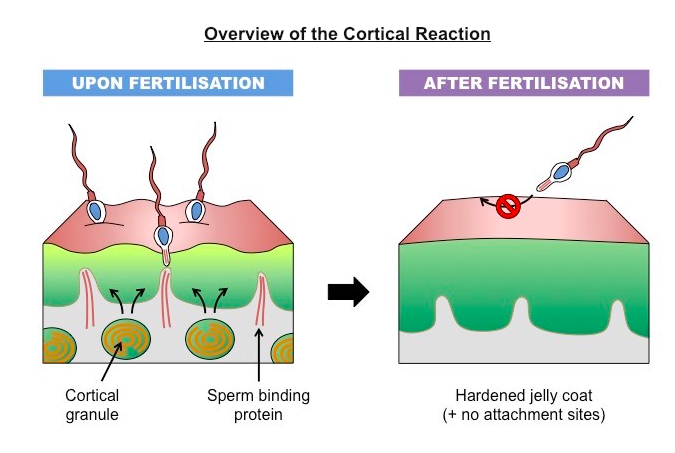 The fertilized egg divides via mitosis to form two diploid nuclei and the cytoplasm of the fertilized egg divides equally to form a two-cell embryo.  The two cells replicate their DNA, undergo mitosis again and become a four-cell embryo and so on and so forth.  Further cell divisions occur but some of the divisions are unequal and there is a migration of cells, giving the embryo the shape of a hollow ball.  This is called a blastocyst.  At 7 days old, the blastocyst reaches the uterus and the ZP breaks down.  The blastocyst now requires an external food supply, and so attaches itself to the endometrium.  The outer layer of the blastocyst penetrates the endometrium and is now able to exchange materials with the mother's blood, including absorbing foods and oxygen (Oxford, 2014).

The placenta is necessary because the body surface area to volume ratio becomes smaller as the fetus grows larger.  The placenta's functional unit is a fingerlike piece of tissue called the placental villus.  The villi increase in number during pregnancy to cope with the increasing demands of the fetus.  Maternal blood flows into the spaces around the villi.  Fetal blood is in the capillaries that are close to the surface of each villus.  The cells that separate maternal and fetal blood is called the placental barrier, which is selectively permeable for obvious reasons (Oxford, 2014).

The placenta releases hormones estrogen and progesterone at about nine weeks. 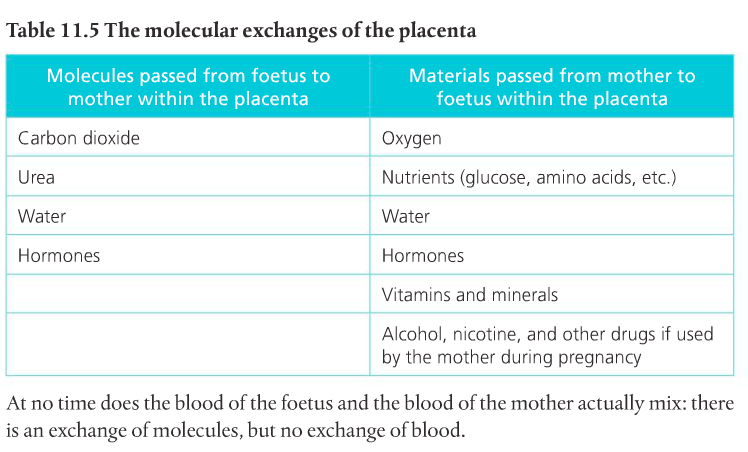 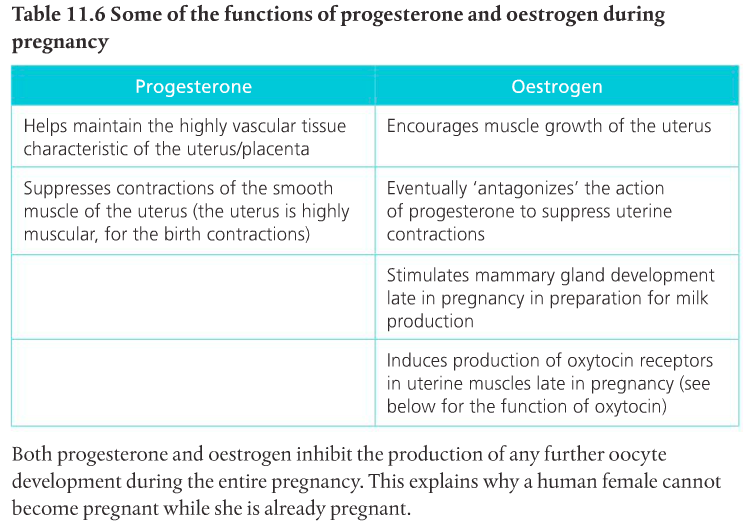