Mission 1:  Blood Laundromat, Part 1
Mission Objectives.   You should be able to...
1.  Draw and annotate a diagram of the human kidney
2.  Define "osmoregulator" and "osmoconformer."
3.  Explain how a Malphigian tubule system works.
4.  Explain why blood differs between the renal artery and the renal vein.
5.  Describe the ultrastructure of the glomerulus and Bowman's capsule and explain how they facilitate ultrafiltration.
6.  Draw and annotate a diagram of a nephron.

Osmoregulation is a form of homeostasis whereby the concentration of hemolymph, or blood in the case of animals with closed circulatory systems, is kept within a certain range.  When animals break down amino acids, the nitrogenous waste product is toxic and needs to be excreted.  In insects, the waste product is usually in the form of uric acid and in mammals, it is in the form of urea.  See the below table from the Pearson (2014) text. 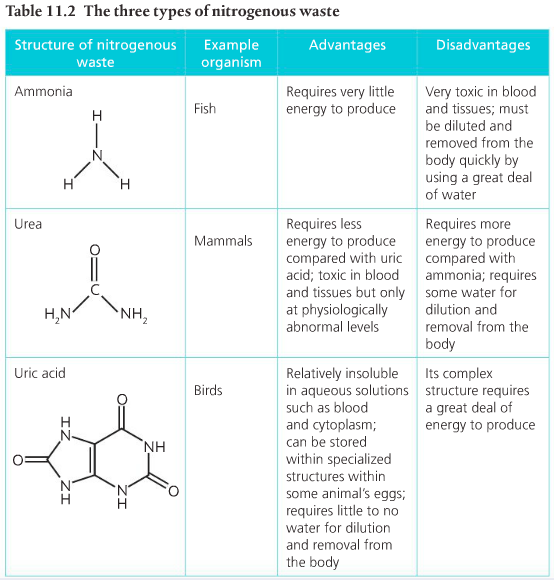 The Human Kidney.   The functional unit of the kidney is called a nephron.  Kidneys function in both osmoregulation and excretion.  They are responsible for removing substances from the blood that are not needed or are harmful.
As a result, the composition of blood in the renal artery (through which blood enters the kidney) is different from that in the renal vein (through which blood leaves).  Substances that are present in the renal artery and not the renal vein include (1) toxins and other substances that are ingested and absorbed but are not fully metabolized by the body, and (2) excretory waste products including nitrogenous wastes, mainly urea (Oxford 2014).

Other substances removed from the blood by the kidney that are not excretory products include (1) excess water, produced by cellular respiration or absorbed from food in the gut, and (2) excess salt, absorbed from food in the gut.  These are not excretory products because they are not produced by body cells.  Removal of excess water and salt is part of osmoregulation.  While blood in the renal artery might contain a variable water or salt content, blood in the renal vein has a more constant concentration because osmoregulation has occurred (Oxford 2014).

The kidneys filter about 20% of the volume of plasma from the blood flowing through them.  This filtrate contains all of the substances in plasma apart from large protein molecules.  The kidneys then actively reabsorb the specific substances in the filtrate that the body needs.  The result of this process is that unwanted substances pass out of the body in the urine.  These substances are present in the renal artery but not the renal vein (Oxford 2014).

Plasma proteins are not filtered by the kidney, so they should be present in the same concentration in both vessels.  Presence in the urine indicates abnormal function, which can be detected via physical examination (Oxford 2014).

The Glomerulus.  The ultrastructure of the glomerulus and Bowman's capsule facilitate ultrafiltration.  Blood pressure in the capillaries is high and the capillary wall is permeable, so the volume of fluid forced out is about 100X greater than in other tissues.  The fluid forced out is called glomerular filtrate. Table 2 on page 489 of the Oxford text lists the composition of blood plasma and filtrate.  Most of the solutes are filtered out freely from blood plasma, but almost all proteins are retained in the capillaries of the glomerulus.  This is separation of particles differing in size by a few nanometers and is thus called ultrafiltration.  All particles with a molecular mass below 65,000 amu can pass through.  The permeability of larger molecules depends on shape and charge (Oxford 2014).

​Below are diagrams of a nephron, a Bowman's capsule and its glomerulus.  These are from the Pearson (2014) text. 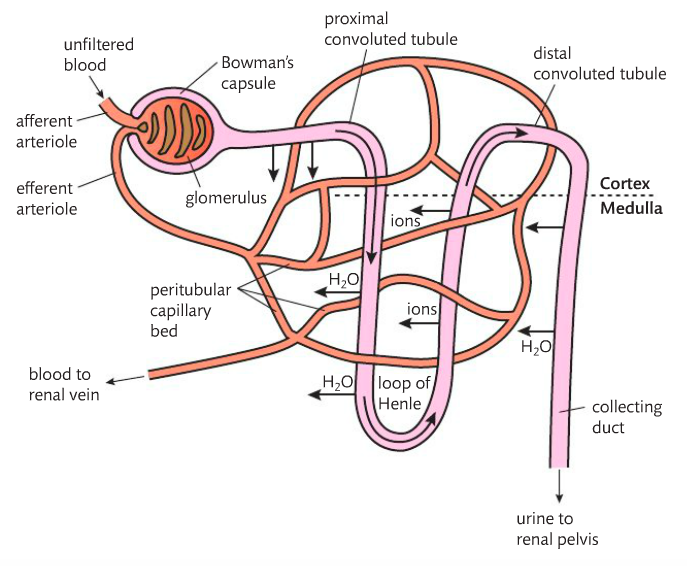 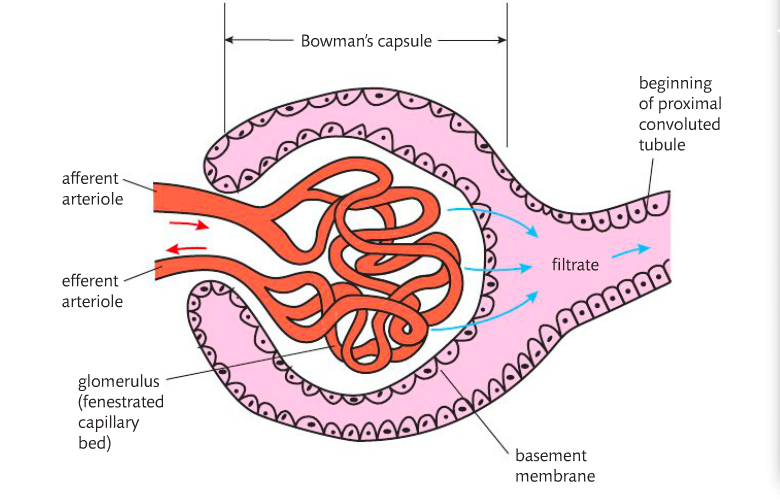 There are three parts to the ultrafiltration system:

1.  Fenestrations lie between the cells in the wall of the capillaries.  These are about 100nm in diameter and they allow fluid to escape, but not blood cells.
2.  The basement membrane covers and supports the wall of the capillaries.  It is made of negatively-charged glycoproteins, which form a mesh.  It prevents plasma proteins from being filtered out, due to their size and negative charges.
3.  Podocytes form the inner wall of the Bowman's capsule.  These cells have extensions that wrap around the capillaries of the glomerulus and many short side branches called foot processes.  Very narrow gaps between the foot processes help prevent small molecules from being filtered out of blood in the glomerulus

If particles pass through all three parts, they become part of the glomerular filtrate (Oxford 2014).
The proximal convoluted tubule selectively reabsorbs useful substances by active transport.  The glomerular filtrate flows into the proximal convoluted tubule.  The volume of glomerular filtrate produced per day is about 180dm3, which is a lot.  The filtrate consists of nearly 1.5kg of salt and 5.5kg of glucose.  As the volume of urine produced per day is only about 1.5dm3 and it contains no glucose and way less than 1.5kg of salt, almost all of the filtrate must be reabsorbed into the blood.  Most of this takes place in the first part of the nephron--the proximal convoluted tubule.  By the end of the proximal tubule, glucose and amino acids and 80% of the water, sodium and other mineral ions have been absorbed (Oxford 2014).  On page 491, Table 3 shows the the process by which specific ions and compounds are absorbed.

The below image comes from the Pearson (2014) text. 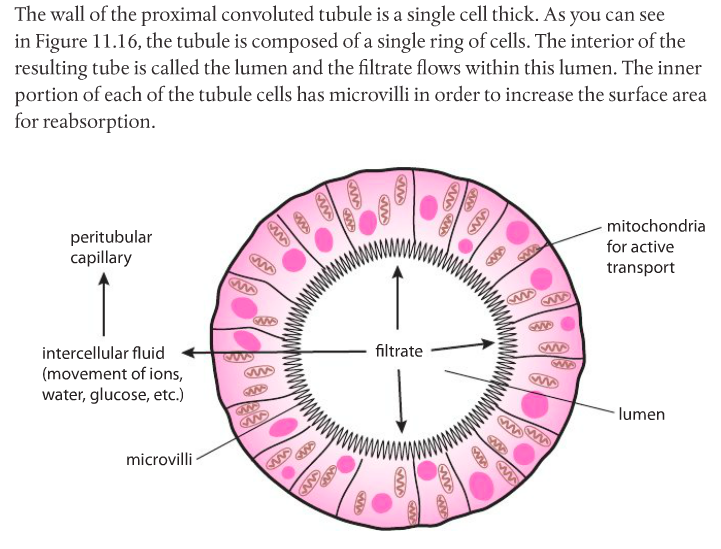 Mission 2:  Blood Laundromat, Part 2
Mission Objectives.  You should be able to...
1.  Describe the structure and function of the loop of Henle.
2.  Describe the process of osmoregulation.
3.  Explain how hypertonicity is created in the medulla.
4.  Explain the function of ADH.

The role of the loop of Henle is to maintain hypertonic conditions in the medulla of the kidney. The overall effect of the loop is to create a gradient of solute concentration in the medulla.  The energy to create the gradient is expended by cell walls in the ascending limb.  Sodium ions are pumped out of the filtrate to the fluid between the cells in the medulla, called the interstitial fluid.  The wall of the ascending limb is unusual in that it is impermeable to water, so water is retained in the filtrate, even though the interstitial fluid is now hypertonic relative to the filtrate.  This means that it has a higher solute concentration (Oxford 2014).

The images below are from the Pearson (2014) text and Bioninja. 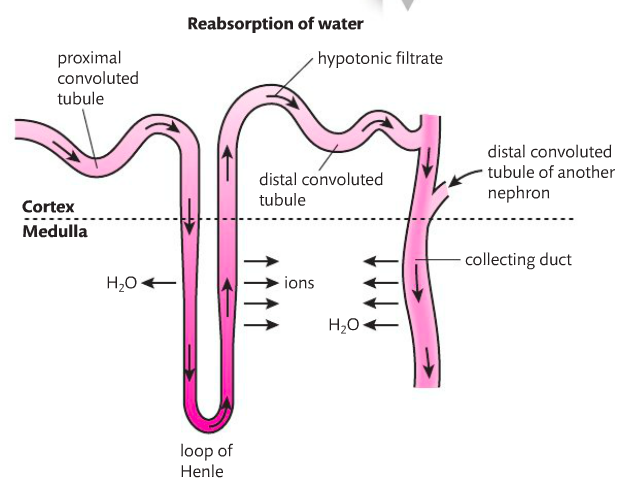 This system for raising solute concentration is an example of a countercurrent multiplier system  It is a countercurrent system because of the flows of fluid in opposite directions.  It is a countercurrent multiplier because it causes a steeper gradient of solute concentration to develop in the medulla than would be possible with a concurrent system.  This prevents the blood flowing through this vessel from diluting the solute concentration of the medulla while allowing the vasa recta to carry away the water removed from the filtrate in the descending end (Oxford 2014).
Function of ADH.  Antidiuretic Hormone (ADH) controls the reabsorption of water in the collecting duct (CD).  The filtrate that enters the CD can be considered urine in a dilute form.  The water content is very high, making the urine hypotonic in relation to the surrounding interstitial fluid of the medulla.  If the amount of water was to be lost as urine, the person would need to have a large intake of water to replace what was lost.  So, in most circumstances, some of the water is reabsorbed through the wall of the CD.  The CD is differentially permeable to water.  It depends on the presence or absence of ADH.  ADH is secreted from the back of the pituitary gland and the target area is the kidney CDs.  The CD extends into the medulla, which has highly hypertonic interstitial fluid.  If ADH is present, the CD becomes permeable to water and the water moves out of the CD via osmosis and enters the capillary bed to be returned to the bloodstream.  If ADH is not present, the collecting duct is not made permeable to water, and the water remains in the CD with other waste solutes and the urine is more dilute (Pearson 2014).

​The action of the kidneys helps to keep the relative amounts of water and solutes in balance at an appropriate level.  This is called osmoregulation.

See below, from the Pearson text. 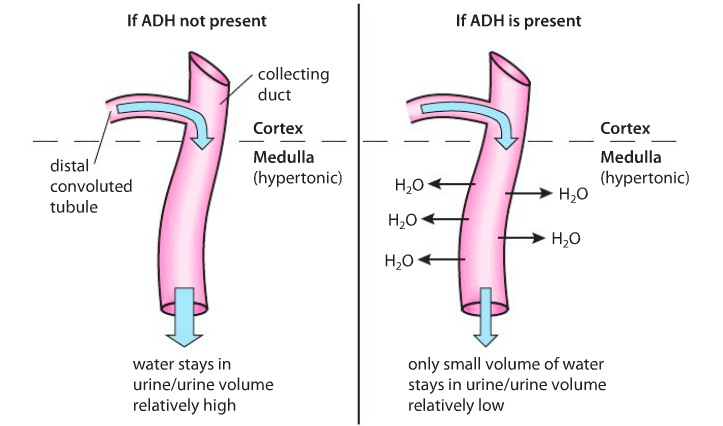