Mission 1: Advanced Inheritance
Mission Objectives.  You should be able to:
1.  Explain how unlinked genes segregate as a result of meiosis.
2.  Define "locus."
3. Differentiate between discrete and continuous variation.
4. Define "polygenic inheritance" and explain how it might also be influenced by environmental factors.
5. Explain the purpose of a chi-square test.
6.  Complete and analyze a dihybrid cross.
7. Describe Morgan's discovery of non-Mendelian ratios in Drosophila.
​
The law of segregation states that during the production of gametes, alleles segregate (or separate) so that offspring acquire one allele from each parent.  The law of independent assortment states that when two or more traits are inherited, independent hereditary factors sort independently in gamete production, giving individual traits an equal opportunity to occur.

Genes that are not linked should segregate independently, which means they should be able to pass to the next generation with or without the other gene.  They show no dependence on each other and no preference either way.  During the shuffling of alleles in meiosis, the genes are equally distributed between gametes.  As a result, there should be predictable ratios.

There are autosomal genes, which means they’re located on any of the 22 autosomes, not the sex chromosomes.  A trait that is sex-linked is located on the 23rd pair (the sex chromosomes).  Where a gene is located determines whether the trait it controls is more common in males than females.  When a trait is more common in one sex than the other, the chances are that the trait is sex-linked and the locus is either on the X or the Y, or both.  If there is no pattern, then the trait is likely autosomal (Pearson, 2014).
Any two genes that are found on the same chromosome are said to be linked.  Linked genes are passed on to the next generation together. See the Drosophila data on p. 449 in the Oxford text.  Linked genes have a special notation used in test crossing. To determine whether a fly’s phenotype is the result of a homozygous or heterozygous genotype, a test cross is completed using a known homozygous recessive (Pearson, 2014).

Recombinant is used to describe the new chromosome and the resulting organism.  Recombinants have allele combinations that do not match either parent’s genotype.  The way recombinants form is through crossing over.  Without this process, certain alleles would always be inherited with certain other alleles for the reason that they are linked (Pearson, 2014).

​Below is a gene linkage practice problem.  You need to be able to form and identify recombinants like this.
Polygenic Inheritance.  This involves two or more genes influencing the expression of one trait.  When two or more allele pairs are found at different loci, the number of possible genotypes is greatly increased.  Most human traits are too complex and show too many combinations to be determined by one gene (Pearson, 2014).

With two alleles (dominant and recessive) of a single gene, possible phenotypes are limited.  When there are multiple alleles for a single trait, the phenotype possibilities increases. When an array of possible phenotypes can be produced, it is called continuous variation.  Skin color is such a trait.  The intensity of pigment in skin is the result of the interaction of multiple genes.  When variation is not continuous, it is referred to as discontinuous variation, or discrete variation (Pearson, 2014).  When there are many intermediate phenotype possibilities, the trait shows continuous variation, which becomes a bell curve when results are plotted on a graph.  See page 450 in the Oxford text.
Genetics isn't always as simple as having two alleles.  Two alleles lead to three genotypes and two phenotypes.  But what happens when there are multiple alleles?  Blood typing is a good example of discrete variation (Oxford, 2014).  For example, in blood typing, there are four phenotypes: A   B   AB  and  O.  There are six different genotypes that lead to these four phenotypes, which come from three different alleles: A  B  and O.  It is at this point where superscripts are used to denote more than two alleles.  Using the blood typing example, the gene for ABO blood type is denoted with an "I."  Then two  alleles for blood type are written as superscripts (which can't be typed directly into this post) but look below. Lowercase "i" is the recessive allele for type O blood. 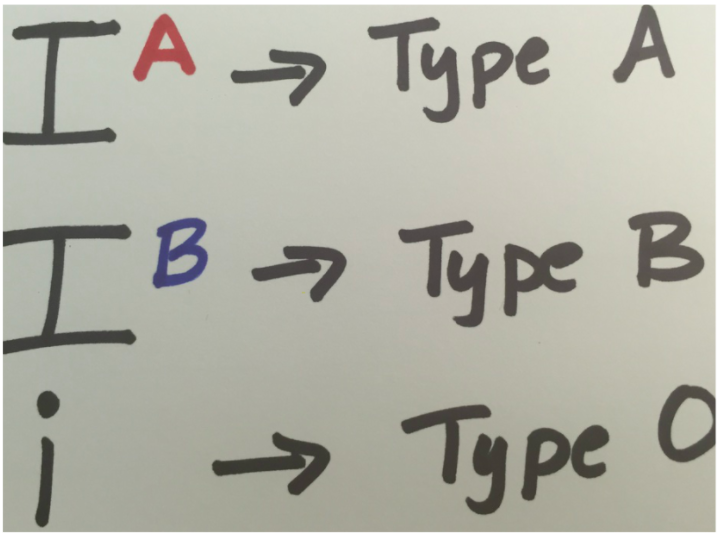 Thomas Hunt Morgan is credited with discovering non-Mendelian ratios in his research with fruit flies.  He believed that the variation he saw in organisms was better explained by environmental influence.  The Oxford text goes into detail on pages 447 and 448, so be sure to read.
We will discuss usage of the Chi Square test after we cover gene pools and speciation.  Prepare for it by watching this video.
Proudly powered by Weebly